Fnac (French pronunciation: ​[fnak]) is a large French retail chain selling cultural and electronic products, founded by André Essel and Max Théret in 1954. Its head office is in Le Flavia in Ivry-sur-Seine near Paris. Fnac is an abbreviation of Fédération Nationale d’Achats des Cadres ("National Purchasing Federation for Cadres").

The company's founders were André Essel and Max Théret.[1] Fnac was founded in 1954.

Fnac holds "forums" throughout the year, which are opportunities for customers to have dialogue with people such as Pedro Almodóvar, George Lucas, and David Cronenberg, discussions with authors including Paul Auster, Pierre Bourdieu, and Françoise Giroud in addition to concerts. Musicians playing in these concerts have included Yann Tiersen, Ben Harper, Keane and David Bowie.

Each year a "book fair" is held with discussions among writers, politicians and the public. Topics related to literature, culture, society and the sciences are discussed. Since 2001 the company has also annually presented an award, Le prix du roman Fnac, whose winners are chosen by a panel of booksellers and members. Dominique Mainard, Pierre Charras, Pierre Charras and Pierre Péju are among those who have won. These events are shown on the company website fnaclive.com (in French).

The company claims to be committed to defending the diversity of music. In February 2002 Fnac published with UPFI (Union des Producteurs Phonographiques Français Indépendants) "Manifeste pour la diversité musicale", as a prelude to a policy of favorable treatment for independent labels and their artists. Fnac publishes "Indétendances," a compilation of ten artists bimonthly published by independent labels, which it set aside part of its listening kiosks in stores to promote their work.[9]

Max Théret had a passion for photography which began in 1932. Hunted by the Gestapo, Théret left the Occupied Zone in 1942, moving to Grenoble, where he took up photography as a career. After the war, he trained as a photo laboratory technician, founded his own laboratory, and later constructed the first colour-processing machine in France. In 1951, while working for the telephone company, he founded Economie Nouvelle, a membership discount buying group for products sold through participating merchants.

In 1953, Théret and André Essel conceived a new magazine[10]-based buyers club. Founded 1954, Fnac was a members-only discount buyers' club,[11] offering sharp discounts on commercial and consumer products, based on the founders' socialist principles.[12] Their aim was to improve the lives of the workers, not through higher salaries but through lower prices.

The first shop was opened in a sublet, a second-floor apartment on the rue de Sebastopol in Paris on July 31, 1954.[5]

The brand positioning of the company continued with the training of sales assistants in their product categories, with purchases being guaranteed for one year. Furthermore, all products were tested in the company's independent test centre before sale. The test centre would check for technical quality, ease of use, price and the "price/quality ratio," and all results were published in the company's free members' magazine Contact, which today can also be found advertised in store. In addition, staff were expected to do more than just sell their products but offer advice to customers and beginning in 1957 blacklist any unsatisfactory products, such as those with technical difficulties. By the end of its first full year of operation the company saw revenues of 50 million old francs. In 1957, it was selling televisions, hi-fis, recording equipment, radios and records.[12]

In 1966, the Fnac store was opened to non-members and began to expand, opening its second store, also in Paris on the avenue de Wagram, near the Arc de Triomphe in 1969.[11] By this time, the company had 580 employees.

The 1970s saw further expansion for Fnac, as the company began opening shops in the French provinces outside Paris and a third in the city itself that sold books, the newest addition to the product range. The founders of the company sold 40 percent of the company to insurance firm Union des Assurances de Paris (Axa) to raise money to fund growth. In turn, the insurance firm sold 16 percent of its shares to investment bank Banque de Paris et des Pays Bas (later known as Banque Paribas), in 1972.

In 1974, the company began selling books at 80% of the recommended retail price, sparking protests from publishers, writers and independent booksellers alike, who could not benefit from the economies of scale. This prompted government action in 1982 with the so-called 'anti-Fnac' law, that was signed to limit discounts on books to a maximum of five percent.[13] In 1975, videos were added to the product range.[11]

Towards the late 1970s, Fnac continued to expand by building to 12 stores in Paris and other cities through France. In 1977, the remaining shares of the company's founders were sold to the Société Génerale des Cooperatives de Consommation (SGCC, the financial arm of the Coop retailing group) to raise more capital.

FNAC became a Public limited company on the Paris stock exchange in 1980 when 25 percent of the company was offered to the public. SGCC, however, maintained a 51 percent control of the company, which now employed more than 2,700 and was declaring turnover of FFr 2.2 billion. 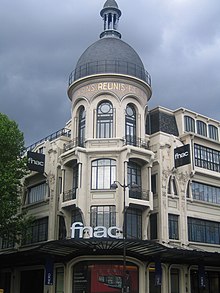 In 1981, FNAC opened a store in Brussels, Belgium under the management of Sodal, a joint-venture between FNAC (40 percent) and the GIB Group (60 percent). The GIB Group later added three more stores in the mid-1980s, in Ghent, Antwerp, and Liège.

In 1983, Essel retired and was replaced by the then SGCC president Roger Kerinec.

In 1985, SGCC sold its shares to the insurance group Garantie Mutuelle des Fonctionnaires (GMF) due to growing competition from the French hypermarket and discount chains such as Carrefour and E.Leclerc. Michel Barouin, GMF's president and director general, took these positions at FNAC as well. In 1987, Barouin disappeared in an airplane accident and Jean-Louis Petriat was named to lead both GMF and FNAC.

In 1988, the first Virgin Megastore opened in Paris. Petriat announced a FFr 1.5 billion plan to add 15 new stores to the 31-store chain and double the company's gross revenues, in order to compete with the new entrant to the French market. Petriat also had plans to expand into the German market. By this point, sales of compact discs and other recordings had joined books as the company's most important sources of revenue.

During the late 1980s, Petriat added a music distribution division following the purchase of Wotre Music Distribution (WMD). In January 1991, Fnac Music was formed. Petriat hoped to build the first French multinational record company, with plans to capture as much as five percent of the market.

The 1990s brought fierce competition after the arrival of HMV and Virgin Megastores in 1988 as well as the strength of hypermarkets. The company responded by cutting its prices and stepping up the competition, which forced HMV to leave France after only six months. Virgin Megastores remained in the French market, and decided to open two more stores in addition to its original store in Paris. In response to the megastore, as seen to the right, Fnac spent around $23 million to build its own megastore, at 32,000 square metres, more than twice the size of the Virgin megastore, which became known as "the Cathedral".

In 1991, the first Fnac store was opened in Berlin continuing with Petriat's plans, this was close to the original Virgin megastore, which opened there only a few months earlier.

In 1992, the fate of FNAC Librairie Internationale, featuring books in languages other than French, was sealed and closed after only a year of trading.[14] This store was converted to a computer products-only concept, called FNAC Micro, which proved more successful.

In 1993, the first Fnac store was opened in Madrid, Spain.[11] However, the FNAC Music subsidiary, while posting some successes, failed to live up to the company's expectations and was unable to gain more than a two percent market share and was eventually sold off the distribution arm WMD, which shut down FNAC Music in 1994.[15]

Despite some failures, the company revealed growing revenues though shrinking profits in the early 1990s, also attributed to the recession in the French economy. In 1991 the company recorded gross sales of FFr 7.4 billion, while profits fell approximately FFr 55 million, to FFr 159.5 million. The following year, despite a rise in revenues to FFr 8.9 billion, the company's net income dropped to FFr 31.9 million.

The falling profits for Fnac was a similar situation to the parent company, GMF whose share count totalled more than 80 percent. To raise more capital, GMF agreed to sell its shares of FNAC in July 1993 to Altus Finances, a subsidiary of government-owned Crédit Lyonnais, and Phenix, a property group owned by French waterworks company Compagnie Générale des Eaux, for FFr 2.4 billion. The deal came under scrutiny by the Commission des opérations de bourse (COB) though was allowed to proceed in September 1993. Crédit Lyonnais became the majority shareholder, with 64 percent of shares, while Générale des Eaux held 34 percent. The remaining two percent of shares continued to be publicly owned.

In 1994, Crédit Lyonnais announced it was going to sell its 64 percent share of the company as part of a FFr 20 billion asset-reduction plan. In July 1994, the Altus Finances subsidiary agreed to sell the majority stake in FNAC for FFr 1.9 billion to François Pinault, the largest shareholder in and architect of Pinault-Printemps-Redoute.[16]

Since 1994, PPR or Pinault-Printemps-Redoute has been the majority shareholder of Fnac and the company was led by François-Henri Pinault, son of the parent company's head François Pinault. The new ownership saw the closure of the WMD and FNAC Music subsidiaries and instead concentrated on further expansion of its retail chain. In 1995, the company added its 45th French store, while a second Spanish store, in Barcelona was opened in 1996. In 1995, the Fnac store was closed in Berlin and the company instead continued its international expansion in Belgium, which were now becoming profitable.

In October 1996, the new parent company assumed full control of the Belgian affiliate and announced plans to double the number of stores in Belgium that began with the opening of a fifth store in 1997. In March 1996, François-Henri, was named chairman of Fnac and opened two stores in France. At this point, Fnac had revenues passing FFr 10 billion and net earnings of FFr 200 million.[12]

As of October 2018, the company owns stores in France, Belgium, Portugal, Spain, Switzerland and the Netherlands, and is present as franchising in Morocco, Qatar, Ivory Coast, Cameroon and Congo.[3]

Fnac operates two stores in Tunisia. The first one opened in 2018 in Tunis, and the second in 2019 in Sousse

At the height of its popularity in Brazil, there were twelve Fnac stores operating simultaneously in several Brazilian cities.[20]

In July 2017, all Fnac operations in Brazil were transferred to Livraria Cultura. In October 2018, all shops were closed and online operations ceased.[21]

Fnac operates a single store in Monaco, in the Métropole shopping centre.

As of 2018, there are six Fnac stores in Switzerland, two in Geneva, one in Lausanne, one in Fribourg, one in Conthey and one in Neuchâtel.[24]

Fnac operates a loyalty programme offering points that are awarded each time the card is presented at the till-point, for each euro spent. A membership fee applies. For every 4,000 points earned, a gift card worth €10 is issued to the card holder. As of 2008, the programme has 1.8 million members, with the loyalty card also serving as a credit card. As of 2008, there are two versions of the card, a one-year membership card or alternatively a three-year membership card. The membership card offers a 5% discount on hardware, books and various monthly offers.[25] 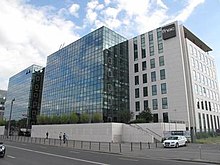 Previously the company head office was located in Clichy-la-Garenne, Hauts-de-Seine. Around 2006 there were rumors stating that Fnac would move to Wissous.[30] In 2008 the head office moved to Ivry-sur-Seine. The subsidiary Fnac.com moved from Aubervilliers to Ivry during the same year.[31]

The story of the 2005 Spanish thriller Mar rojo, starring Maribel Verdú, begins with an armed robbery at a Fnac store in Barcelona.

31. Exclusive: Saraiva leads race for Fnac's Brazil unit -sources 32. Fnac in Brazil: Should I Stay or Should I Go? 33. FNAC PARTNERS WITH DEEZER FOR GIG RECOMMENDATIONS

Retrieved from "http://en.turkcewiki.org/w/index.php?title=Fnac&oldid=966329149"
This website is a mirror of Wikipedia, and is not affiliated with the Wikimedia Foundation.
Categories:
Hidden categories: