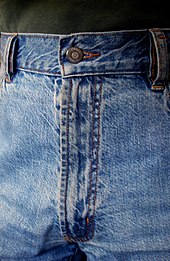 Closed fly on a pair of jeans. The topstitching on a fly will often, as here, be bar tacked.

A fly (also known as a fly front) on clothing is a covering over an opening concealing the mechanism, such as a zip or buttons,[1] used to close the opening. An open fly is a fly that has been left unzipped or unbuttoned.

The term is most frequently applied to a short opening over the groin in trousers, shorts, and other garments, such as in men's briefs. Flies assist in the raising and lowering of non-elastic pants for both males and females. For men and boys, the fly also facilitates urination without removal of clothing, and this is generally considered to be the only appropriate method of using a urinal in a public restroom. The term is also used of overcoats, where a design of the same shape is used to hide a row of buttons. This style is common on a wide range of coats, from single-breasted Chesterfields to covert coats. 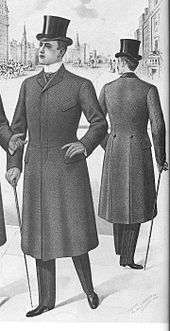 Trousers have varied historically in whether or not they have flies. Originally, trousers did not have flies or other openings, being pulled down for sanitary functions. The use of a codpiece, a separate covering attached to the trousers, became popular in 16th-century Europe, eventually evolving into an attached fall-front (or broad fall). The fly-front (split fall) emerged later.[2] The panelled front returned as a sporting option, such as in riding breeches, but is now hardly used, flies being by far the most common fastening. Most flies now use a zip, though button flies continue in use. The presence of hard steely material within the fly reportedly may on occasion result in damage to nerve endings in erectile tissue in men if there is prolonged and repeated contact between the surface and the semi or fully erect penile glans.[3]

Retrieved from "http://en.turkcewiki.org/w/index.php?title=Fly_(clothing)&oldid=949549521"
This website is a mirror of Wikipedia, and is not affiliated with the Wikimedia Foundation.
Categories:
Hidden categories: