Fishing down the food web 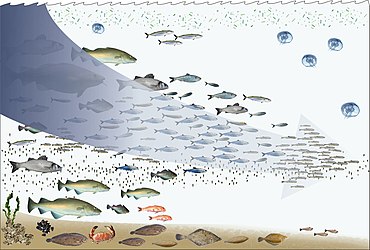 Fishing down the food web

Fishing down the food web is the process whereby fisheries in a given ecosystem, "having depleted the large predatory fish on top of the food web, turn to increasingly smaller species, finally ending up with previously spurned small fish and invertebrates".[1]

The process was first demonstrated by the fisheries scientist Daniel Pauly and others in an article published in the journal Science in 1998.[2] Large predator fish with higher trophic levels have been depleted in wild fisheries. As a result, the fishing industry has been systematically "fishing down the food web", targeting fish species at progressively decreasing trophic levels.

The mean trophic level of the world fisheries catch has steadily declined because many high trophic level fish, such as this tuna, have been overfished.

Fishermen are increasingly targeting lower trophic level fish, like these anchovies and other forage fish.

According to Daniel Pauly, if the trend continues, consumers may be eating jellyfish sandwiches.[4]

Over the last 50 years, the abundance of large predator fish, such as cod, swordfish and tuna, has dropped 90 percent.[5] Fishing vessels now increasingly pursue the smaller forage fish, such as herrings, sardines, menhaden and anchovies, that are lower on the food chain.[2] "We are eating bait and moving on to jellyfish and plankton" says Pauly.[6] Beyond this, the overall global volume of fish captured has been declining since the late 1980s.[7]

Pauly's team used the catch data from the FAO[11] which it fed into an Ecopath model. Ecopath is a computerised ecosystem modelling system.[12] The functioning of an ecosystem can be described using path analysis to track the direction and influence of the many factors controlling the ecosystem. The original Ecopath model was applied to a coral reef food web. Scientists tracked tiger sharks at the top of the food web and collected data on their feeding behaviour, what they ate and how much. Likewise, they collected feeding data on the other organisms in the food chains down to the primary producers, such as algae. This data was fed into an Ecopath model, which then described the energy flow, in terms of food, as it moved from the primary producers up the food web to the apex predator. Such models allow scientists to compute the complex effects that occur, both direct and indirect, from the interactions of the many ecosystem components.[13]

The model showed that over the last 50 years the mean trophic level of fish catches has declined by somewhere between 0.5 and 1.0 trophic levels.[2] This decline applied both globally, on a worldwide scale, and more locally on a scale specific to oceans, that is, for the separate FAO subareas: the Atlantic, Indian and Pacific Oceans, and the Mediterranean-Black Seas.[14]

Pauly's team argued in their 1998 paper that the larger, more valuable predatory fish, such as tuna, cod and grouper, had been systematically overfished, with the result that fishing effort was shifting to less desirable species further down the food chain. This "fishing down the food web", said Pauly, would in time reduce people to a diet of "jellyfish and plankton soup". The colourful language and innovative statistical modelling by Pauly's team triggered critical reactions. Later in the same year, Caddy and his team from the FAO argued a counter position in a paper also published in Science. They argued that Pauly's team had oversimplified the situation and may have "misinterpreted the FAO statistics".[15] The response of Pauly's team was published in the same paper, claiming that the corrections suggested by the FAO, such as accounting for aquaculture, actually made the trend worse.[16]

The concerns raised by the FAO were further countered by Pauly and others in 2005.[9][17] Other researchers have established that "fishing down" also applies to smaller, regional areas, such as the Mediterranean, North Sea, Celtic Sea, and in Canadian, Cuban and Icelandic waters.[17]

A 2006 study suggested that in a number of examined ecosystems, catches of species at high trophic level did not decline, but rather that low trophic level fisheries were added in parallel over time, resulting in confounding landing data through a related but different mechanism.[18] A study on Alaskan marine fisheries concluded that in the examined area, the decline of mean catch trophic level was connected to climate-driven fluctuations in biomass of low trophic level species rather than predator collapses, and suggested that similar dynamics might be in play in other instances of reported food web degradation.[19]

In 2000, the Convention on Biological Diversity, an international treaty aimed at sustaining biodiversity which has been adopted by 193 member countries, selected the mean trophic level of fisheries catch as one of eight indicators for immediate testing. They renamed it the "Marine Trophic Index" (MTI), and have mandated that member countries report over time on changes in ocean trophic levels as a primary indicator of marine biodiversity and health.[20][21]

The Marine Trophic Index is a measure of the overall health and stability of a marine ecosystem or area. The index is also a proxy measure for overfishing and an indication of how abundant and rich the large, high trophic level fish are.[22]

Changes in the Marine Trophic Index over time can function as an indicator of the sustainability of a country’s fish resources. It can indicate the extent that the fishing effort within a country's fishing grounds is modifying its fish stocks. A negative change generally indicates that larger predator fish are becoming depleted, and an increasing number of smaller forage fish are being caught. A zero or positive change in the Marine Trophic Index indicates the fishery is stable or improving.[9]

Development of fishing down
Fishing down is a succession which reverses the usual evolutionary sequence.
"It consists of a gradual loss of large organisms, species diversity, and structural diversity, and a gradual replacement of recently evolved, derived groups (marine mammals, bony fishes) by more primitive groups (invertebrates, notably jellyfishes, and bacteria)." – Daniel Pauly[21]

Ecologically, the decline in the mean trophic level is explained by the relationship between the size of the fish captured and their trophic level. The trophic level of fishes usually increases with their size, and fishing tends to selectively capture the larger fishes. This applies both between species as well as within species. When the fishing is intense, the relative abundance of the larger fish positioned high in the food chain is reduced. Consequently, over time, small fishes start to dominate the fisheries catches, and the mean trophic level of the catches declines.[14] Recently the market value of small forage fishes and invertebrates, which have low trophic levels, has sharply increased to the point where they can be considered to be subsidizing fishing down.[21]

Daniel Pauly has suggested a framework for the ecological impacts fishing down can have on marine ecosystems. The framework distinguishes three phases:[21]

As an example, the table above shows trends in the trophic levels of fish farmed in the Mediterranean. However, the farming of bluefin tuna is restricted to a fattening process. Juvenile tuna are captured from the wild and put in pens for fattening. Wild stocks of bluefin are now threatened, and the fisheries scientist Konstantinos Stergiou and colleagues argue that the "fact that the capacity of tuna farms greatly exceeds the total allowable catch indicates lack of conservation planning in development of the tuna-fattening industry, which, ideally, should have been linked to fisheries management policies, and may lead to illegal fishing".[14]

Also, fish farming in the Mediterranean is a net fish consumer. Large amounts of animal feed are needed to feed a high trophic fish like the bluefin tuna. This feed consists of fishmeal processed from forage fishes like sardines and anchovies that humans would otherwise consume directly. In addition to ecological issues, this raises ethical issues. Much of the fish suitable for direct human consumption is being used to grow higher trophic level fish to indulge a relatively small group of affluent consumers.[14]

Retrieved from "http://en.turkcewiki.org/w/index.php?title=Fishing_down_the_food_web&oldid=964676426"
This website is a mirror of Wikipedia, and is not affiliated with the Wikimedia Foundation.
Categories:
Hidden categories: