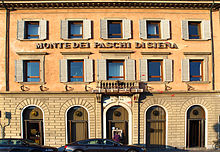 Financial institutions can be distinguished broadly into two categories according to ownership structure:

Some experts see a trend toward homogenisation of financial institutions, meaning a tendency to invest in similar areas and have similar business strategies. A consequence of this might be fewer banks serving specific target groups, and small-scale producers may be under-served.[3]

Standard Settlement Instructions (SSIs) are the agreements between two financial institutions which fix the receiving agents of each counterparty in ordinary trades of some type. These agreements allow traders to make faster trades since the time used to settle the receiving agents is conserved. Limiting the trader to an SSI also lowers the likelihood of a fraud. SSIs are used by financial institutions to facilitate fast and accurate cross-border payments.

Financial institutions in most countries operate in a heavily regulated environment because they are critical parts of countries' economies, due to economies' dependence on them to grow the money supply via fractional-reserve banking. Regulatory structures differ in each country, but typically involve prudential regulation as well as consumer protection and market stability. Some countries have one consolidated agency that regulates all financial institutions while others have separate agencies for different types of institutions such as banks, insurance companies and brokers.

Merits of raising funds through financial institutions are as follows:

Retrieved from "http://en.turkcewiki.org/w/index.php?title=Financial_institution&oldid=963370490"
This website is a mirror of Wikipedia, and is not affiliated with the Wikimedia Foundation.
Categories:
Hidden categories: