(Redirected from Feminism in Denmark)
Jump to navigation Jump to search

The modern-day character and the historical status of women in Denmark has been influenced by their own involvement in women's movements and political participation in the history of Denmark. Their mark can be seen in the fields of politics, women's suffrage, and literature, among others.

The legal, civilian and cultural status of women in prehistoric society during the Stone Age, Bronze Age and Iron Age in Scandinavia are somewhat obscure, but from Viking Age sources we know that women were relatively free, compared to men, contemporary societies and the later Middle Ages.[4]

With the gradual introduction of Catholicism in Scandinavia in the early Middle Ages, women's rights were increasingly regulated and restricted. During the Middle Ages, the legal rights of women in Denmark were regulated by the county laws, the landskabslovene from the 13th-century, and therefore varied somewhat between different counties: however, a married woman was generally under the guardianship of her spouse.[5] Sons and daughters both had right to inheritance, though sisters inherited half of the portion of a brother.[5][better source needed]

The cities were regulated by the city laws. With the exception of widows, who inherited the right to the trade of her late spouse, women was not allowed membership in the guilds, which monopolized most professions in the cities: however, in practice, it was very common for women, whether married or not, to be granted dispensation to manage a minor business for the sake of her own support, and become a købekone (business woman), a custom which continued until women were given the same rights as men within commerce in 1857.[5]

The Civil Code of 1683, or Christian 5.s Danske Lov (also enacted in the Danish province of Norway as the Civil Code of 1687 or Christian Vs Norske Lov[6] ), defined all unmarried females regardless of age as minors under the guardianship of their closest male relative, and a married woman under the guardianship of her spouse, while only widows were of legal majority.[7] This code was in effect until the 19th-century: in 1857, unmarried women were given legal majority, while married women were given the same right in 1899.[5]

Girls were included as pupils in the first attempt of a public elementary school system in 1739, though this attempt was not fully realized until 1814.[5][5] From the 1780s, schools for secondary education for females were established in the capital of Copenhagen, though female teachers were only allowed to teach girls or very small boys.[5] One of the first schools for females of any note was the Døtreskolen af 1791, and in the 1840s, schools for girls spread outside the capital and a net of secondary education girl schools was established in Denmark. In 1875, women were given access to university education.[5] In the reformed law of access in 1921, women were formally given access to all professions and positions in society with the exception of some military and clerical positions and the position of judge (given in 1936).[5]

The first women's movement was led by the Dansk Kvindesamfund ("Danish Women's Society"). Line Luplau was one of the most notable woman in this era. Tagea Brandt was also part of this movement, and in her honor was established Tagea Brandt Rejselegat or Travel Scholarship for women. The Dansk Kvindesamfund's efforts as a leading group of women for women led to the existence of the revised Danish constitution of 1915, giving women the right to vote and the provision of equal opportunity laws during the 1920s, which influenced the present-day legislative measures to grant women access to education, work, marital rights and other obligations.[8]

Following the International Congress of Women held in The Hague in 1915, Danske Kvinders Fredskæde or the Danish Women's Peace Chain was established in Denmark. It called for women to provide more active support for peace once the First World War was over.[9][10]

The second wave of women's movement was organized with the Rødstrømpebevægelsen (the Red Stocking movement). The effort led to "institutionalized feminism" (managed directly by the Danish government) and to the "mainstreaming of equal opportunities" between Danish men and women.[8]

The Danish Women's Society (DK) debated, and informally supported, women's suffrage from 1884, but it did not support it publicly until in 1887, when it supported the suggestion of the parliamentarian Fredrik Bajer to grant women municipal suffrage.[12] In 1886, in response to the perceived overcautious attitude of DK in the question of women suffrage, Matilde Bajer founded the Kvindelig Fremskridtsforening (or KF, 1886-1904) to deal exclusively with the right to suffrage, both in municipal and national elections, and it 1887, the Danish women publicly demanded the right for women's suffrage for the first time through the KF. However, as the KF was very much involved with worker's rights and pacifist activity, the question of women's suffrage was in fact not given full attention, which led to the establishment of the strictly women's suffrage movement Kvindevalgretsforeningen (1889-1897).[12] In 1890, the KF and the Kvindevalgretsforeningen united with five women's trade worker's unions to found the De samlede Kvindeforeninger, and through this form, an active women's suffrage campaign was arranged through agitation and demonstration. However, after having been met by compact resistance, the Danish suffrage movement almost discontinued with the dissolution of the De samlede Kvindeforeninger in 1893.[12]

In 1898, an umbrella organization, the Danske Kvindeforeningers Valgretsforbund or DKV was founded and became a part of the International Woman Suffrage Alliance (IWSA).[12] In 1907, the Landsforbundet for Kvinders Valgret (LKV) was founded by Elna Munch, Johanne Rambusch and Marie Hjelmer in reply to what they considered to be the much too careful attitude of the Danish Women's Society. The LKV originated from a local suffrage association in Copenhagen, and like its rival LKV, it successfully organized other such local associations nationally.[12]

Women won the right to vote in municipal elections on April 20, 1908. However it was not until June 5, 1915 that they were allowed to vote in Rigsdag elections.[13] 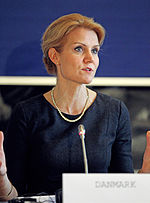 A second female minister in Denmark was elected twenty years later (counting from 1924). Afterwards – in 2000 – the female members of the government of Denmark increased to 45%.[14]

The first female mayor in Denmark was Eva Madsen who became mayor of Stege in 1950.[15]

Percentage of births to unmarried women, in selected countries, including Denmark, 1980 and 2007.[16] By 1980, Denmark already had a high percentage (compared to most other countries) of births outside of marriage

As in many other Western countries, the connection between child birth and marriage has been significantly weakened since the later half of the 20th century. As of 2016, 54% of births were to unmarried women.[17] During the 1960s and 70s, Denmark was one of the first European countries to change its social norms towards accepting unmarried cohabitation and childbearing, at a time when this was still seen as unacceptable in many other parts of the continent.

Woman with child in Copenhagen

The maternal mortality rate in Denmark is 12 deaths/100,000 live births (as of 2010).[18] Although this is low by international standards, it is higher than in many other Western countries, and it has increased in recent years.[19]

Abortion laws were liberalized in 1973, allowing the procedure to be done on-demand during the first 12 weeks, and in specific circumstances at later stages of the pregnancy.[20]

The total fertility rate (TFR) in Denmark is 1.73 children born/woman (2014 estimates), which, although below the replacement rate, is one of the highest in Europe.[22]

Denmark provides for sex education in schools.[23] The age of consent in Denmark is 15.

Denmark has a reputation of being "open" with regards to sexuality, perhaps due to historical factors, such as being the first country to abolish censorship and legalize pornography in 1967. However, today the Danish pornography industry is minimal compared to many other countries, with large scale production of pornography having moved to other countries.[19]

Line luplau seen in the foreground on her daughter Marie Luplau's large group portrait painting From the Early Days of the Fight for Women's Suffrage (1897).

Among notable female Danes was Matilde Bajer, who – together with her husband Fredrik Bajer – founded the Danish Women's Society in 1871, one of the oldest women's rights organizations in the world. Another notable Danish woman was Lise Nørgaard (b. 1917), a Danish author and journalist during the 1930s and the 1940s. She authored the autobiographical books such as the Kun en pige ("Just a Girl", 1992) and De sendte en dame ("They Sent a Lady", 1993).[8] Another notable Danish woman was Line Luplau, who achieved national fame in 1887 when she supported the cause to grant women to vote during local elections.[11]

In literature, one of the most notable female literary writers in Denmark was Karen Blixen (1885–1962). She was also known by the pseudonyms Isak Dinesen and Tania Blixen. Blixen was the author of the Seven Gothic Tales (1934), a collection of short stories, which she wrote at the age of 49.[35]

This lists the "women firsts" in different subjects in chronological order:

Retrieved from "http://en.turkcewiki.org/w/index.php?title=Women_in_Denmark&oldid=936735578"
This website is a mirror of Wikipedia, and is not affiliated with the Wikimedia Foundation.
Categories:
Hidden categories: