Federal Reserve Board of Governors

(Redirected from Federal Reserve Board)
Jump to navigation Jump to search

By law, the appointments must yield a "fair representation of the financial, agricultural, industrial, and commercial interests and geographical divisions of the country".[1][2] As stipulated in the Banking Act of 1935, the Chair and Vice Chair of the Board are two of seven members of the Board of Governors who are appointed by the President from among the sitting Governors.[1][2]

The terms of the seven members of the Board span multiple presidential and congressional terms. Once a member of the Board of Governors is appointed by the president, he or she functions mostly independently. Such independence is unanimously supported by major economists.[3] The Board is required to make an annual report of operations to the Speaker of the U.S. House of Representatives.[4] It also supervises and regulates the operations of the Federal Reserve Banks, and the U.S. banking system in general. The Board obtains its funding from charges that it assesses on the Federal Reserve Banks, and not from the federal budget.

Membership is by statute limited in term, and a member that has served for a full 14 year term is not eligible for reappointment.[5] There are numerous occasions where an individual was appointed to serve the remainder of another member's uncompleted term, and has been reappointed to serve a full 14-year term.[5] Since "upon the expiration of their terms of office, members of the Board shall continue to serve until their successors are appointed and have qualified",[5] it is possible for a member to serve for significantly longer than a full term of 14 years. The law provides for the removal of a member of the Board by the President "for cause".[5]

Records of the Federal Reserve Board of Governors are found in the Record Group n. 82 at the National Archives and Records Administration.[7] 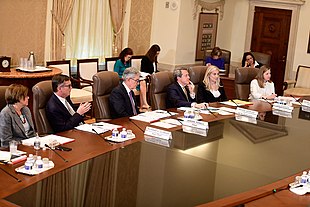 Board of governors in April 2019, when two of the seven seats were vacant

The current members of the Board of Governors are as follows:[8]

The below were formally nominated to fill a vacant seat but failed to be confirmed by the Senate.

In addition, Steve Moore and Herman Cain were announced, but never formally nominated, to fill Bloom Raskin and Yellen's seats (without specifying which seat or district) by Donald Trump in 2019 before withdrawing from consideration.[20][21]

There are eight committees.[22] 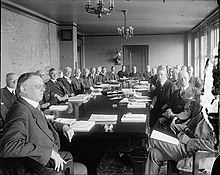 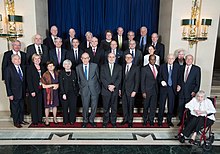 The Federal Reserve Board has seven seats subject to Senate confirmation, separate from a member's term as chair or vice chair.[23][24][25][26]

This article incorporates public domain material from websites or documents of the National Archives and Records Administration.

Retrieved from "http://en.turkcewiki.org/w/index.php?title=Federal_Reserve_Board_of_Governors&oldid=963055088"
This website is a mirror of Wikipedia, and is not affiliated with the Wikimedia Foundation.
Categories:
Hidden categories: