The Federal Housing Administration (FHA) is a United States government agency founded by President Franklin Delano Roosevelt, created in part by the National Housing Act of 1934. The FHA insures mortgages made by private lenders for single family properties, multifamily rental properties, hospitals, and residential care facilities. FHA mortgage insurance protects lenders against losses. If a property owner defaults on their mortgage, FHA pays a claim to the lender for the unpaid principal balance. Because lenders take on less risk, they are able to offer more mortgages. The goal of the organization is to facilitate access to affordable mortgage credit for low- and moderate-income and first-time homebuyers, for the construction of affordable and market rate rental properties, and for hospitals and residential care facilities in communities across the United States and its territories.

It is different from the Federal Housing Finance Agency (FHFA), which supervises government-sponsored enterprises.

During the Great Depression many banks failed, causing a drastic decrease in home loans and ownership. At that time, most home mortgages were short-term (three to five years), with no amortization, and balloon instruments at loan-to-value (LTV) ratios below sixty percent.[1] This prevented many working and middle-class families from being able to afford home ownership. The banking crisis of the 1930s forced all lenders to retrieve due mortgages; refinancing was not available, and many borrowers, now unemployed, were unable to make mortgage payments. Consequently, many homes were foreclosed, causing the housing market to plummet. Banks collected the loan collateral (foreclosed homes) but the low property values resulted in a relative lack of assets.

In 1934 the federal banking system was restructured. The National Housing Act of 1934 created the Federal Housing Administration. Its intention was to regulate the rate of interest and the terms of mortgages that it insured; however, the new practices were restricted only to white Americans. These new lending practices increased the number of white Americans who could afford a down payment on a house and monthly debt service payments on a mortgage, thereby also increasing the size of the market for single-family homes.[2]

The FHA calculated appraisal value based on eight criteria and directed its agents (called "appraisers") to lend more for higher appraised projects, up to a maximum cap. The two most important were "Relative Economic Stability", which constituted 40% of appraisal value, and "protection from adverse influences", which made up another 20%.

In 1935, Colonial Village in Arlington, Virginia, was the first large-scale, rental housing project erected in the United States that was Federal Housing Administration-insured.[3] During World War II, the FHA financed a number of worker's housing projects including the Kensington Gardens Apartment Complex in Buffalo, New York.[4]

In 1965 the Federal Housing Administration became part of the Department of Housing and Urban Development (HUD). 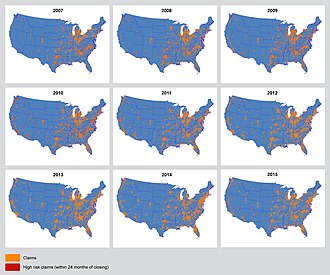 Since 1934, the FHA and HUD have insured almost 50 million home mortgages. Currently, the FHA has approximately 8.5 million insured single family mortgage, more than 11,000 insured multifamily mortgages, and over 3,900 mortgages for hospitals and residential care facilities in its portfolio.[5]

A borrower's down payment may come from a number of sources. The 3.5% requirement can be satisfied with the borrower using their own cash or receiving am eligible gift from a family member or other eligible source.

The FHA insurance payments include two parts: the upfront mortgage insurance premium (UFMIP) and the annual premium remitted on a monthly basis—the mutual mortgage insurance (MMI). The UFMIP is an obligatory payment, which can either be made in cash at closing or financed into the loan, and thus paid over the life of the loan. It adds a certain amount to your monthly payments.

Unlike other forms of conventional financed mortgage insurance, the UFMIP on an FHA loan is prorated over a three-year period, meaning should the homeowner refinance or sell during the first three years of the loan, they are entitled to a partial refund of the UFMIP paid at loan inception. If you have financed the UFMIP into the loan, you cannot cancel this part. The insurance premiums on a 30-year FHA loan which began before 6/3/2013 must have been paid for at least 5 years. The MMI premium gets terminated automatically once the unpaid principal balance, excluding the upfront premium, reaches 78% of the lower of the initial sales price or appraised value. After 6/3/2013 for both 30 and 15-year loan term, the monthly insurance premium must be paid for 11 years if the initial loan to value was 90% or less. For loan to value greater than 90% the insurance premium must now be paid for the entire loan term.

A 15-year FHA mortgage annual insurance premium will be cancelled at 78% loan-to-value ratio regardless of how long the premiums have been paid. The FHA's 78% is based on the initial amortization schedule, and does not take any extra payments or new appraisals into account. For loans begun after 6/3/2013, the 15-year FHA insurance premium follows the same rules as 30-year term (see above.) This is the big difference between PMI and FHA insurance: the termination of FHA premiums can hardly be accelerated.

Borrowers who do make additional payments towards an FHA mortgage principal, may take the initiative through their lender to have the insurance terminated using the 78% rule, but not sooner than after 5 years of regular payments for 30-year loans. PMI termination, however, can be accelerated through extra payments. For the 78% rule the FHA uses the original value or purchase price, whichever is lower, they will not go off a new appraisal even if the value has increased.

The creation of the Federal Housing Administration successfully increased the size of the housing market. Home ownership increased from 40% in the 1930s to 61% and 65% in 1995. Home ownership peaked at nearly 69% in 2005, near the peak of the US housing bubble. By 1938 only four years after the beginning of the Federal Housing Administation, a house could be purchased for a down payment of only ten percent of the purchase price. The remaining ninety percent was financed by 25-year, self-amortizing, FHA-insured mortgage loan. After World War II, the FHA helped finance homes for returning veterans and families of soldiers. It has helped with purchases of both single family and multifamily homes. In the 1950s, 1960s, and 1970s, the FHA helped to spark the production of millions of units of privately owned apartments for elderly, handicapped, and lower-income Americans. When the soaring inflation and energy costs threatened the survival of thousands of private apartment buildings in the 1970s, FHA's emergency financing kept cash-strapped properties afloat. In the 1980s, when the economy did not support an increase in homeowners, the FHA helped to steady falling prices, making it possible for potential homeowners to finance when private mortgage insurers pulled out of oil-producing states.[5][failed verification]

The greatest effects of the Federal Housing Administration can be seen within minority populations and in cities. Nearly half of FHA's metropolitan area business is located in central cities, a percentage that is much higher than that of conventional loans.[6] The FHA also lends to a higher percentage of African Americans and Hispanic Americans, as well as younger, credit-constrained borrowers, contributing to the increase in home ownership among these groups.

As the capital markets in the United States matured over several decades, the impact of the FHA decreased. In 2006 FHA made up less than 3% of all the loans originated in the United States. In fiscal year 2019, FHA-insured mortgages comprised 11.41% of all single family residential mortgage originations by dollar volume. 82.84% of FHA insured single family forward purchase transaction mortgages in fiscal year 2019 were for first-time homebuyers. Overall, minorities made up 36.24% of FHA purchase mortgage borrowers in calendar year 2018, compared to 19.94% through conventional lending channels

In the 1930s, the Federal Housing Authority established mortgage underwriting standards that significantly discriminated against minority neighborhoods.[7] Between 1934 and 1968, African Americans received only 2 percent of all federally insured home loans.[8] As the significance of subsidized mortgage insurance on the housing market grew, home values in inner-city minority neighborhoods plummeted. Also, the approval rates for minorities were equally low. After 1935, the FHA established guidelines to steer private mortgage investors away from minority areas. This practice, known as redlining, was made illegal by the Fair Housing Act of 1968.[9] Redlining has had long-lasting effects on minority communities.[10][11]

The Federal Housing Administration is one of the few government agencies that is largely self-funded.[12]

Retrieved from "http://en.turkcewiki.org/w/index.php?title=Federal_Housing_Administration&oldid=972148127"
This website is a mirror of Wikipedia, and is not affiliated with the Wikimedia Foundation.
Categories:
Hidden categories: