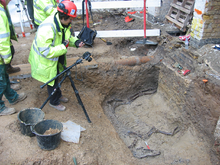 A photographer taking a record shot of a horse burial in a Roman ditch re-cut. A re-cut is a type of feature.

A feature in archaeology, specifically excavation, is a collection of one or more contexts representing some human non-portable activity.[1] Features are an indication that the area in which it was found has been interfered with in the past, usually by humans.[2]

Features are distinguished from artifacts in that they cannot be separated from their location without changing their form. Artifacts are portable, while features are non-portable.[3]

Features and artifacts differ from ecofacts. Ecofacts are natural remains, such as plants and animals.[4]

Features tend to have an intrusive characteristic or associated cuts. This is not definitive as surfaces can be referred to as features of a building and free standing structures with no construction cut can still be features. Middens (dump deposits) are also referred to as features due to their discrete boundaries. This is seen in comparison to leveling dumps, which stretch out over a substantial portion of a site. The concept of a feature is, to a certain degree, fuzzy, as it will change depending on the scale of excavation. 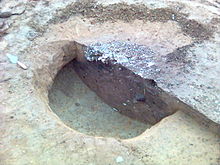 A saxon pit, another type of feature 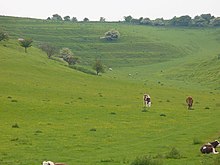 A lynchet is a type of archeological feature. They are terraces formed on the side of a hill.

Features specific to certain architecture types or eras such as trilithon for the purposes of this article are not considered generic. Generic features are feature types that can come from a broad section in time of the archaeological record if not all of it. Generic types can include:

Retrieved from "http://en.turkcewiki.org/w/index.php?title=Feature_(archaeology)&oldid=1009652737"
This website is a mirror of Wikipedia, and is not affiliated with the Wikimedia Foundation.
Categories:
Hidden categories: