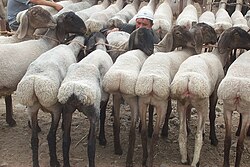 Fat-tailed sheep at a livestock market in Kashgar, China

Two general varieties of fat-tails exist, the broad fat-tails and the long fat-tails. The majority of fat-tailed sheep breeds have broad fat-tails, where the fat is accumulated in baggy deposits in the hind parts of a sheep on both sides of its tail and on the first 3–5 vertebrae of the tail.[4][5] In the long-tailed sheep the fat is accumulated in the tail itself, which may grow so large that it drags on the ground and hinders copulation.[4]

The earliest record of fat-tailed sheep is found in ancient Uruk (3000 BC) and Ur (2400 BC) on stone vessels and mosaics. Another early reference is found in the Bible (Exodus 29:22 and Leviticus 3:9), where a sacrificial offering is described which includes the tail fat (called Alya, Hebrew: אַלְיָה) of sheep.

Sheep were specifically bred for the unique quality of the fat stored in the tail area and the fat (called Elyah, Arabic:[6] ألية ) was used extensively in medieval Arab and Persian cookery. The tail fat is still used in modern cookery, though there has been a reported decline, with other types of fat and oils having increased in popularity. 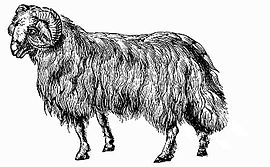 19th Century engraving of an eastern breed of fat-tailed sheep 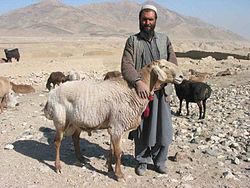 A shepherd with fat-tailed sheep on a mountainside in Afghanistan 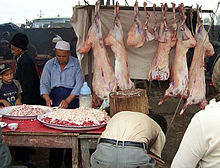 Fat-tailed sheep are hardy and adaptable, able to withstand the tough challenges of desert life. When feed is plentiful and parasites not a major factor, fat-tailed sheep can be large in size and growth. The carcass quality of these sheep is quite good, with most of the fat concentrated in the tail area - it could account for as much as 10 pounds (4.5 kilograms) of the weight on a 60 pound (27 kilogram) carcass.[citation needed] The fat-tailed breeds seen frequently in the US are the Karakul and Tunis.

The wool from fat-tailed breeds is usually coarse and frequently has colored fibers. It would be of limited value in commercial markets. Today it is used primarily for rug-making and other cottage-type industries. Bedouin women make rugs and blankets from the wool. Some of their handiwork can be purchased in the villages of Egypt. Shearing in Egypt is done once or twice a year with hand clippers. There is a reluctance to use electric shears because of wool quality and the difficulty in getting replacement parts when they become dull or worn out.

Retrieved from "http://en.turkcewiki.org/w/index.php?title=Fat-tailed_sheep&oldid=934662743"
This website is a mirror of Wikipedia, and is not affiliated with the Wikimedia Foundation.
Categories:
Hidden categories: