Jump to navigation Jump to search
Problem of sharing resources

In game theory, fair division is the problem of dividing a set of resources among several people who have an entitlement to them, such that each person receives their due share. This problem arises in various real-world settings, such as: division of inheritance, partnership dissolutions, divorce settlements, electronic frequency allocation, airport traffic management, and exploitation of Earth observation satellites. This is an active research area in mathematics, economics (especially social choice theory), dispute resolution, and more. The central tenet of fair division is that such a division should be performed by the players themselves, maybe using a mediator but certainly not an arbiter as only the players really know how they value the goods.

The archetypal fair division algorithm is divide and choose. It demonstrates that two agents with different tastes can divide a cake such that each of them believes that he got the best piece. The research in fair division can be seen as an extension of this procedure to various more complex settings.

There are many different kinds of fair division problems, depending on the nature of goods to divide, the criteria for fairness, the nature of the players and their preferences, and other criteria for evaluating the quality of the division.

Things that can be divided[edit]

Formally, a fair division problem is defined by a set

(often called "the cake") and a group of

players. A division is a partition of

, one subset per player.

can be of various types:

Additionally, the set to be divided may be:

Finally, it is common to make some assumptions about whether the items to be divided are:

Based on these distinctions, several general types of fair division problems have been studied:

Most of what is normally called a fair division is not considered so by the theory because of the use of arbitration. This kind of situation happens quite often with mathematical theories named after real life problems. The decisions in the Talmud on entitlement when an estate is bankrupt reflect some quite complex ideas about fairness,[1] and most people would consider them fair. However they are the result of legal debates by rabbis rather than divisions according to the valuations of the claimants.

According to the Subjective theory of value, there cannot be an objective measure of the value of each item. Therefore, objective fairness is not possible, as different people may assign different values to each item. Empirical experiments on how people define the concept of fairness[2] lead to inconclusive results.

Therefore, most current research on fairness focuses on concepts of subjective fairness. Each of the

people is assumed to have a personal, subjective utility function or value function,

, which assigns a numerical value to each subset of

. Often the functions are assumed to be normalized, so that every person values the empty set as 0 (

Based on these subjective value functions, there are a number of widely used criteria for a fair division. Some of these conflict with each other but often they can be combined. The criteria described here are only for when each player is entitled to the same amount:

In addition to fairness, it is sometimes desired that the division be Pareto optimal, i.e., no other allocation would make someone better off without making someone else worse off. The term efficiency comes from the economics idea of the efficient market. A division where one player gets everything is optimal by this definition so on its own this does not guarantee even a fair share. See also efficient cake-cutting and the price of fairness. 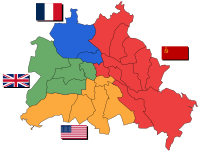 Berlin divided by the Potsdam Conference

In the real world people sometimes have a very accurate idea of how the other players value the goods and they may care very much about it. The case where they have complete knowledge of each other's valuations can be modeled by game theory. Partial knowledge is very hard to model. A major part of the practical side of fair division is the devising and study of procedures that work well despite such partial knowledge or small mistakes.

An additional requirement is that the fair division procedure be a truthful mechanism, i.e., it should be a dominant strategy for the participants to report their true valuations. This requirement is usually very hard to satisfy in combination with fairness and Pareto-efficiency.

A generalization of the problem is to allow each interested party to consist of several players who share the same set of resources but have different preferences.[3][4]

A fair division procedure lists actions to be performed by the players in terms of the visible data and their valuations. A valid procedure is one that guarantees a fair division for every player who acts rationally according to their valuation. Where an action depends on a player's valuation the procedure is describing the strategy a rational player will follow. A player may act as if a piece had a different value but must be consistent. For instance if a procedure says the first player cuts the cake in two equal parts then the second player chooses a piece, then the first player cannot claim that the second player got more.

What the players do is:

It is assumed the aim of each player is to maximize the minimum amount they might get, or in other words, to achieve the maximin.

According to Sol Garfunkel, the cake-cutting problem had been one of the most important open problems in 20th century mathematics,[5] when the most important variant of the problem was finally solved with the Brams-Taylor procedure by Steven Brams and Alan Taylor in 1995.

Divide and choose's origins are undocumented. The related activities of bargaining and barter are also ancient. Negotiations involving more than two people are also quite common, the Potsdam Conference is a notable recent example.

The theory of fair division dates back only to the end of the second world war. It was devised by a group of Polish mathematicians, Hugo Steinhaus, Bronisław Knaster and Stefan Banach, who used to meet in the Scottish Café in Lvov (then in Poland). A proportional (fair division) division for any number of players called 'last-diminisher' was devised in 1944. This was attributed to Banach and Knaster by Steinhaus when he made the problem public for the first time at a meeting of the Econometric Society in Washington D.C. on 17 September 1947. At that meeting he also proposed the problem of finding the smallest number of cuts necessary for such divisions.

Retrieved from "http://en.turkcewiki.org/w/index.php?title=Fair_division&oldid=993328605"
This website is a mirror of Wikipedia, and is not affiliated with the Wikimedia Foundation.
Categories:
Hidden categories: