(Redirected from Eyre Western)
Jump to navigation Jump to search

Convention and common use has divided South Australia into a number of regions. These do not always have strict boundaries between them and have no general administrative function or status. Many of them correspond to regions used by various administrative or government agencies, but they do not always have the same boundaries or aggregate in the same way. The generally accepted regions are:

Most of the other regional divisions of the state use a combination of these same labels, sometimes grouped, and sometimes with precise boundaries that might be slightly different in each case.

Statistical Divisions (SD) form the main structural hierarchy of statistical analysis. These regions are structured to provide a broad range of social, demographic and economic statistics.[1] The basis for the boundary delineations center on socioeconomic criteria.[1] The eight Statistical Divisions in South Australia are:[2]

The Australian Bureau of Meteorology (BOM) provides forecasts and observations within South Australia and its adjoining waters using the following 15 land areas which are known as “districts” and 11 areas known as “coastal waters” which are located within both the state’s jurisdiction and Australia’s maritime jurisdiction:[3][4]

South Australian government departments and agencies with some exceptions use a uniform set of boundaries to describe the extent of 12 administrative regions within the state which are used to “develop and improve reporting, planning and service delivery systems”.[5][6]

Adelaide Hills occupies the area in the Mount Lofty Ranges immediately east of the regions of East, Northern and Southern Adelaide, and consists of the following local government areas - the Adelaide Hills Council and the District Council of Mount Barker.[7][6]

Barossa Light and Lower North occupies land located immediately of the north of the Adelaide metropolitan area and contains the following local government areas - the Town of Gawler, the Adelaide Plains Council, the Barossa Council and the Light Regional Council.[8][6]

Far North consists of all land in the north of the state including the Anangu Pitjantjatjara Yankunytjatjara lands. It is bounded to the north and north-east by the Northern Territory and Queensland, in part to the west by Western Australia and in part to the east by New South Wales and by the regions of Eyre Western, Yorke and Mid North, and Murray and Mallee from west to east in the state’s south. While most of it is in the state’s unincorporated area, it does include the following local government areas - the City of Port Augusta, the Flinders Ranges Council, the District Council of Coober Pedy and the Municipal Council of Roxby Downs.[11][6]

Limestone Coast consists of land in the state’s south east of the state which includes the following local government areas - the City of Mount Gambier and the District Councils of Grant, Kingston, Robe, Tatiara and Naracoorte Lucindale, and the Wattle Range Council.[13][6]

Northern Adelaide occupies the northern end of the Adelaide metropolitan area and consists of the following local government areas: the City of Playford, the City of Salisbury, the City of Tea Tree Gully and the east half of the City of Port Adelaide Enfield.[15][6]

Southern Adelaide occupies the southern end of the Adelaide metropolitan area and consists of the following local government areas: the City of Holdfast Bay, the City of Marion, the City of Mitcham and the City of Onkaparinga.[16][6]

Western Adelaide occupies the area in the Adelaide metropolitan area located to the north-west of the Adelaide city centre and consists of the following local government areas: the City of Charles Sturt, the City of West Torrens and the western half of the City of Port Adelaide Enfield.[17][6] 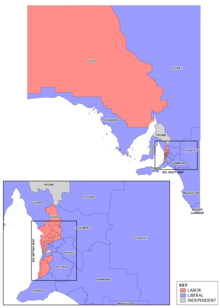 Map of rural state electoral districts showing results from the 2014 election and changes since. 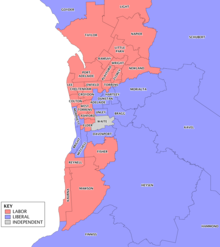 Map of metropolitan state electoral districts showing results from the 2014 election and changes since.

South Australia is divided into 47 electoral districts each of which elects a single member into the South Australian House of Assembly (also called the lower house of parliament).

It is divided into ten electoral divisions which each elect a member into the House of Representatives of the Parliament of Australia. These divisions are: 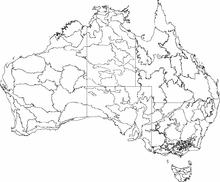 The Interim Biogeographic Regionalisation for Australia (IBRA) is a biogeographic regionalisation of Australia; divided into 89 bioregions and 419 subregions. Each region is a land area made up of a group of interacting ecosystems that are repeated in similar form across the landscape. Regions and subregion cross state and territory boundaries. The bioregions that are located wholly or partly in South Australia are:[24]

The wine industry has a number of defined wine zones and regions, however they do not cover the entire state (especially as some areas are not suitable for growing grapes). These are controlled as Australian geographical indications by the Australian Grape and Wine Authority. As of March 2015, the following zones are in use in South Australia: Barossa, Far North, Fleurieu, Lower Murray, Limestone Coast, Mount Lofty Ranges and The Peninsulas.[27]

Retrieved from "http://en.turkcewiki.org/w/index.php?title=Regions_of_South_Australia&oldid=947254570#Eyre_Western"
This website is a mirror of Wikipedia, and is not affiliated with the Wikimedia Foundation.
Categories:
Hidden categories: