Eurogamer is a video game journalism website owned by Gamer Network, both formed alongside each other in 1999. Its editor is Oli Welsh. 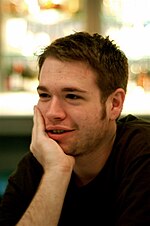 Eurogamer (initially stylised as EuroGamer) was launched on 4 September 1999.[2] The founding team included John "Gestalt" Bye, the webmaster for the PlanetQuake website and a writer for British magazine PC Gaming World; Patrick "Ghandi" Stokes, a contributor for the website Warzone; and Rupert "rauper" Loman, who had organised the EuroQuake esports event for the game Quake.[2]

In January 2008, Tom Bramwell overtook the role of editor-in-chief from Kristan Reed, remaining in that role until he resigned in November 2014.[3][4] Since then, Oli Welsh served as editor for Eurogamer.[5]

It is known for the EGX, formerly Eurogamer Expo, trade fair organised by its parent company since 2008.[6]

In February 2015, Eurogamer dropped its ten-point scale for review scores in favour of a "recommendation system", in which a game would be labelled as "Essential", "Recommended" or "Avoid".[7]

Eurogamer is the principal site of the Gamer Network family of video game-related websites. It has several regional sub-outlets:

Digital Foundry, founded in 2004, has been hosted on Eurogamer since 2007 and is led by Richard Leadbetter. It performs technical analyses of games.[20]

Retrieved from "http://en.turkcewiki.org/w/index.php?title=Eurogamer&oldid=936013579"
This website is a mirror of Wikipedia, and is not affiliated with the Wikimedia Foundation.
Categories:
Hidden categories: