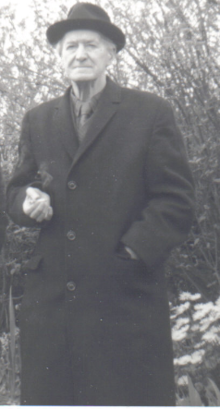 Eric Honeywood Partridge (6 February 1894 – 1 June 1979) was a New Zealand–British lexicographer of the English language, particularly of its slang. His writing career was interrupted only by his service in the Army Education Corps and the RAF correspondence department during World War II.

Partridge was born in the Waimata Valley, near Gisborne, on the North Island of New Zealand[1] to John Thomas Partridge, a grazier, and his wife Ethel Annabella Norris.[2] In 1908 the family moved to Queensland, Australia,[3] where he was educated at the Toowoomba Grammar School.[4] He studied classics and then French and English at the University of Queensland.[5]

During this time Partridge also worked for three years as a schoolteacher before enrolling in the Australian Imperial Force in April 1915 and serving in the Australian infantry during the First World War,[6] serving in Egypt, Gallipoli and on the Western Front,[1] before being wounded in the Battle of Pozières.[6] His interest in slang and the "underside" of language is said to date from his wartime experience.[7] Partridge returned to university between 1919 and 1921, when he received his BA.[6]

After receiving his degree, Partridge became Queensland Travelling Fellow at Balliol College, Oxford,[6] where he worked on both an MA on eighteenth-century English romantic poetry, and a B.Litt in comparative literature.[8] He subsequently taught in a grammar school in Lancashire for a brief interval, then in the two years beginning September 1925, took lecturing positions at the Universities of Manchester and London.[1][9] From 1923, he "found a second home", occupying the same desk (K1) in the British Museum Library (as it was then known) for the next fifty years. In 1925 he married Agnes Dora Vye-Parminter, who in 1933 bore a daughter, Rosemary Ethel Honeywood Mann.[1][10] In 1927 he founded the Scholartis Press, which he managed until it closed in 1931.[11]

During the twenties he wrote fiction under the pseudonym 'Corrie Denison'; Glimpses, a book of stories and sketches, was published by the Scholartis Press in 1928. The Scholartis Press published over 60 books in these four years,[1] including Songs and Slang of the British Soldier 1914-1918, which Partridge co-authored with John Brophy. From 1932 he commenced writing in earnest. His next major work on slang, Slang Today and Yesterday, appeared in 1933, and his well-known Dictionary of Slang and Unconventional English followed in 1937.[1]

During the Second World War, Partridge served in the Army Education Corps, later transferring to the RAF's correspondence department, before returning to his British Museum desk in 1945.[1]

Partridge wrote over forty books on the English language, including well-known works on etymology and slang. He also wrote novels under the pseudonym Corrie Denison, and books on tennis, which he played well. His papers are archived at the University of Birmingham, British Library, King's College, Cambridge, the Royal Institute of British Architects, the University of Exeter, the University of San Francisco, Warwickshire Record Office, and William Salt Library.

Retrieved from "http://en.turkcewiki.org/w/index.php?title=Eric_Partridge&oldid=952377598"
This website is a mirror of Wikipedia, and is not affiliated with the Wikimedia Foundation.
Categories:
Hidden categories: