Jump to navigation Jump to search
Not to be confused with Ecological economics. 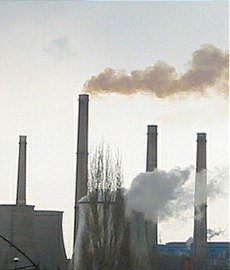 Air pollution is an example of market failure, as the factory is imposing a negative external cost on the community.

Central to environmental economics is the concept of market failure. Market failure means that markets fail to allocate resources efficiently. As stated by Hanley, Shogren, and White (2007):[4] "A market failure occurs when the market does not allocate scarce resources to generate the greatest social welfare. A wedge exists between what a private person does given market prices and what society might want him or her to do to protect the environment. Such a wedge implies wastefulness or economic inefficiency; resources can be reallocated to make at least one person better off without making anyone else worse off." Common forms of market failure include externalities, non-excludability and non-rivalry.[5]

An externality exists when a person makes a choice that affects other people in a way that is not accounted for in the market price. An externality can be positive or negative but is usually associated with negative externalities in environmental economics. For instance, water seepage in residential buildings occurring in upper floors affect the lower floors.[6] Another example concerns how the sale of Amazon timber disregards the amount of carbon dioxide released in the cutting.[7][better source needed] Or a firm emitting pollution will typically not take into account the costs that its pollution imposes on others. As a result, pollution may occur in excess of the 'socially efficient' level, which is the level that would exist if the market was required to account for the pollution. A classic definition influenced by Kenneth Arrow and James Meade is provided by Heller and Starrett (1976), who define an externality as "a situation in which the private economy lacks sufficient incentives to create a potential market in some good and the nonexistence of this market results in losses of Pareto efficiency".[8] In economic terminology, externalities are examples of market failures, in which the unfettered market does not lead to an efficient outcome.

These challenges have long been recognized. Hardin's (1968) concept of the tragedy of the commons popularized the challenges involved in non-exclusion and common property. "Commons" refers to the environmental asset itself, "common property resource" or "common pool resource" refers to a property right regime that allows for some collective body to devise schemes to exclude others, thereby allowing the capture of future benefit streams; and "open-access" implies no ownership in the sense that property everyone owns nobody owns.[9]

The basic problem is that if people ignore the scarcity value of the commons, they can end up expending too much effort, over harvesting a resource (e.g., a fishery). Hardin theorizes that in the absence of restrictions, users of an open-access resource will use it more than if they had to pay for it and had exclusive rights, leading to environmental degradation. See, however, Ostrom's (1990) work on how people using real common property resources have worked to establish self-governing rules to reduce the risk of the tragedy of the commons.[9]

The mitigation of climate change effects is an example of a public good, where the social benefits are not reflected completely in the market price. This is a public good since the risks of climate change are both non-rival and non-excludable. Such efforts are non-rival since climate mitigation provided to one does not reduce the level of mitigation that anyone else enjoys. They are non-excludable actions as they will have global consequences from which no one can be excluded. A country's incentive to invest in carbon abatement is reduced because it can "free ride" off the efforts of other countries. Over a century ago, Swedish economist Knut Wicksell (1896) first discussed how public goods can be under-provided by the market because people might conceal their preferences for the good, but still enjoy the benefits without paying for them.

Assessing the economic value of the environment is a major topic within the field. Use and indirect use are tangible benefits accruing from natural resources or ecosystem services (see the nature section of ecological economics). Non-use values include existence, option, and bequest values. For example, some people may value the existence of a diverse set of species, regardless of the effect of the loss of a species on ecosystem services. The existence of these species may have an option value, as there may be the possibility of using it for some human purpose. For example, certain plants may be researched for drugs. Individuals may value the ability to leave a pristine environment for their children.

Use and indirect use values can often be inferred from revealed behavior, such as the cost of taking recreational trips or using hedonic methods in which values are estimated based on observed prices. Non-use values are usually estimated using stated preference methods such as contingent valuation or choice modelling. Contingent valuation typically takes the form of surveys in which people are asked how much they would pay to observe and recreate in the environment (willingness to pay) or their willingness to accept (WTA) compensation for the destruction of the environmental good. Hedonic pricing examines the effect the environment has on economic decisions through housing prices, traveling expenses, and payments to visit parks.[10]

Solutions advocated to correct such externalities include:

Environmental economics is viewed as more pragmatic in a price system; ecological economics as more idealistic in its attempts not to use money as a primary arbiter of decisions. These two groups of specialists sometimes have conflicting views which may be traced to the different philosophical underpinnings.

Another context in which externalities apply is when globalization permits one player in a market who is unconcerned with biodiversity to undercut prices of another who is - creating a race to the bottom in regulations and conservation. This, in turn, may cause loss of natural capital with consequent erosion, water purity problems, diseases, desertification, and other outcomes that are not efficient in an economic sense. This concern is related to the subfield of sustainable development and its political relation, the anti-globalization movement. 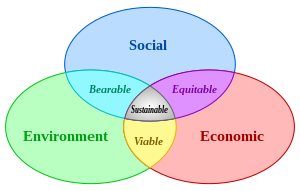 The three pillars of sustainability (clickable)

The more radical Green economists reject neoclassical economics in favour of a new political economy beyond capitalism or communism that gives a greater emphasis to the interaction of the human economy and the natural environment, acknowledging that "economy is three-fifths of ecology" - Mike Nickerson. This political group is a proponent of a transition to renewable energy.

These more radical approaches would imply changes to money supply and likely also a bioregional democracy so that political, economic, and ecological "environmental limits" were all aligned, and not subject to the arbitrage normally possible under capitalism.

An emerging sub-field of environmental economics studies its intersection with development economics. Dubbed "envirodevonomics" by Michael Greenstone and B. Kelsey Jack in their paper "Envirodevonomics: A Research Agenda for a Young Field," the sub-field is primarily interested in studying "why environmental quality [is] so poor in developing countries."[15] A strategy for better understanding this correlation between a country's GDP and its environmental quality involves analyzing how many of the central concepts of environmental economics, including market failures, externalities, and willingness to pay, may be complicated by the particular problems facing developing countries, such as political issues, lack of infrastructure, or inadequate financing tools, among many others.[16]

In the field of law and economics, environmental law is studied from an economic perspective. The economic analysis of environmental law studies instruments such as zoning, expropriation, licensing, third party liability, safety regulation, mandatory insurance, and criminal sanctions. A book by Michael Faure (2003) surveys this literature.[17]

Retrieved from "http://en.turkcewiki.org/w/index.php?title=Environmental_economics&oldid=997005960"
This website is a mirror of Wikipedia, and is not affiliated with the Wikimedia Foundation.
Categories:
Hidden categories: