South East England and the Home Counties (the counties bordering London) tend to reflect the interface between the London region and other regional accents. Affluent districts are associated with a modified Received Pronunciation (RP) accent, reflecting their traditional popularity with upper middle and upper-class residents which has spread throughout more social classes broadly in rural areas with commuting access to London. Less affluent areas have traditionally mainstream London accents (that is, variants of the Estuary English accent) that grade into southern rural outside urban areas.[1]

Commentators report widespread homogenisation in the south-east (Kerswill & Williams 2000; Britain 2002). The features present a levelling between the extremes of Estuarine pronunciation and careful Received Pronunciation and except where an intuitive neutral parity position exists, they include:

Wells notes traditional aspects of rural south-eastern speech as lengthened [æː] in trap words[2] and use of [eɪ] or [ɛʊ] in mouth words.[3]

Accents are nonrhotic, that is, /r/ (phonetically [ɹ]) occurs only before vowels.

General characteristics of all major London accents include:

Sloane-speak or Sloaney-speech is spoken by the upper middle and upper classes, ultralocalised in Inner South-West and West London by a range of inhabitants of the very expensive private housing in and around Sloane Street and Sloane Square, Chelsea, Mayfair and alongside Marylebone High Street.[4] The speakers of Sloaney are sometimes defined as Sloane Rangers. Levelling aspects of the speech of the young aristocracy were heightened in the early 1980s by the 'Princess Diana' accent and effect yet drew upon public school and historic vocabulary to form a distinct Sloane-speak of the young and wealthy soon dubbed 'Sloane Rangers'. Here aristocrats' clipped Received Pronunciation was modified in this particular speech community as the young upper and upper-middle classes, like Diana and contemporaries, increasingly settled as singles in the 'muesli belt' round Sloane Square on the border of Belgravia and Chelsea, Chelsea's King's Road into Fulham and even in expensive parts of Putney, Richmond, London, Wandsworth and Battersea. Sloanies followed the 1960s fashion boom of King's Road and became lesser cultural icons for a time in fashion, as well as seeking out idiosyncratic cultural pursuits and language.

Features, whether affected or throwback to particular aristocratic shorthands include 'jah' for yes; "(s)he's rairly, rairly (really, really) nice', or shortened ('Nick's' for Harvey Nichols; 'Rods' for Harrods; 'Fred's' for Fortnum and Mason's). Hyperbole was for a period rife ('frightfully', 'ghastly', 'appalling', 'thanks awfully'), but subject to influences from more demotic speech of the capital, particularly towards its fringes."

Reflecting national upper class moves towards slightly less formal pronunciation,[5] or indeed the middle-dialect influence of Sloane-speak, end-of-sentence glottal stop and final-t /d/ sounds came into the speech of younger Royalty: for instance in the speech of Diana and Prince Edward; and vocoids for "l" as in miʉ[ɫ]k; all juxtaposed against borrowed vocabulary from opposing dialects such as 'bog' (toilet) and 'yonks' (a long time).

To many middle-class Londoners, however, the often drawled pronunciation of the Sloane Rangers was deemed as 'marked' or 'affected' as the Queen's, so closely identified was with a particular social group: the rah-rah accent and dialect, named in 1982, coupled with the most obscure vocabulary became Rah (slang), synonymous with snobbery. The once trendy rah concepts faded into fashion oblivion during the Cool Britannia decade but in the late 2000s staged a comeback with slightly different, edgier, rougher forms continuing to develop:

Cockney is an accent traditionally from the working classes of the areas immediately surrounding the City of London (most famously including the East End). It is characterised by a number of phonological differences from RP:

Multicultural London English (abbreviated MLE), colloquially called Blockney or Jafaican, is a dialect (and/or sociolect) of English that emerged in the late 20th century. It is spoken mainly by youths in inner London.

The speech of Jamaicans, or children of Jamaican parents, in London shows interesting combinations of the Jamaican accent with the London accent. For example, in Jamaican English, /θ/ is replaced by [t], for example both /boːt/. In London, word-final /t/ is realised as [ʔ], as mentioned above. In Jamaican-London speech, glottalization of /t/ applies also to /t/ from /θ/, for example both of them [bʌʊʔ ə dem]. Hypercorrections like [fʊθ] for foot are also heard from Jamaicans.[7] John C. Wells's dissertation, Jamaican pronunciation in London, was published by the Philological Society in 1973.

Essex, is usually associated with Estuary English, mainly in urban areas receiving an influx of East London migrants. The non-urban Essex accent, generally found in the north of the county, is more closely related to those of East Anglia. Residents of places within Essex such as Basildon, Billericay and Grays are more likely to have an accent similar to the traditional 'Cockney' accent, due to the proximity to East London and East End migration to these areas since WWII.

Estuary English is the name given to an accent (or group of accents) that may informally be considered a compromise between Cockney and RP. It retains some aspects of Cockney, such as the vocalisation of [ɫ] (dark L) to [o], and yod-coalescence in stressed syllables (for example, duty [dʒʉːʔi]) and replacement of [t] with [ʔ] (the glottal stop) in weak positions, or occasionally with d).

The east Herts accent traditionally spoken is akin to a native central/north Essex rural accent. The largest towns in particular have the diverse sociolect variants of Received Pronunciation and Estuary English as seen in London, with smaller settlements tending towards the traditional dialects or variants of RP.

Before the 21st Century, West Herts and Buckinghamshire tended to have r-coloured vowels; for instance, here the established dialects made a distinction between the words farther and father (/fɑːʴðəʴ and /fɑːðəʴ/). However, in recent times, strong influences have come from London's Estuary English, thanks to the influx of post-World War II migrants from across London, and thus Estuary English is now the norm across West Herts and Buckinghamshire (though some of the older dialect can be heard in older generations, particularly in more rural areas).[1]

Hampshire is often missed in dialect definitions and placed on borderlines between South East and West England. In country areas, the local accent can still be heard for example by John Arlott, Lord Denning and Reg Presley although the use of the v sound in "field" has declined. Since the 1960s, particularly in Andover and Basingstoke, the local accent has changed reflecting the arrival of East Londoners relocated by London County Council. It can be argued that Hampshire is a borderline county moving East, linguistically.

In the northeast part of the county, the accent tends to have more of a 'twang', leading people from other areas to even mistake the speaker's origins as being Australia, New Zealand or South Africa.

The traditional Portsmouth dialect (affectionately known as the Pompey dialect, and less favourably as Just Chav Talk) is an oddity and somewhat an isolate. It stands well apart both structurally and phonetically from all other local English varieties around it. The traditional origin story is that the Dockyards attracted an influx of East Londoners at the turn of the 20th century and the accent is based in "Dockyard slang". Though structurally it is based around an East London model, it has retained a lot of traditional Hampshire features. Whilst it follows the consonant rules of Estuary English closely, the vowel sounds are quite different. The dialect is not a recent phenomenon, and can be heard in the speech of local people in their nineties. The surrounding accents geographically are quite different, and few contain as many of the "Estuary-isms" found in the Pompey dialect and some of those may actually originate from Portsmouth, rather than Estuary English.[8][9]

As with neighbouring Hertfordshire, Bedfordshire has a variety of accents.

In the Luton/Dunstable Urban Area, the accent is similar to a London accent, and it is often mistaken as one. This is because of the overflow of Londoners and their subsequent generations in the area. The Lutonian accent is not as strong as an accent from Essex.

In Mid Bedfordshire the more traditional accent of the area is still held. Especially by those of an older generation, or in very remote areas.

While in North Bedfordshire especially near the border with Northamptonshire it can be argued that the dialect is one which sounds more like East Midlands English, Bedford itself is linguistically diverse, reflecting the more varied demographics of the town (compared with the surrounding villages). A typical Bedford accent is more similar to a Londonian Luton or Dunstable accent, due largely to movement of people from these places to Bedford. 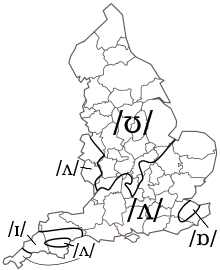 Accents today are a cross between Estuary English and Received Pronunciation which both evolve over time and are becoming significantly more similar; where towards the former, accents have been strongly influenced by proximity to towns in the London Gateway involved in heavy trades, fishing and repairs and merchant sides of the Royal Navy, which was concentrated in Greenwich and Chatham. This corresponds to the name of the dialect which refers to the Thames Estuary. 'H dropping' is in general rare, as in the other Home Counties, but 't dropping' or substitution with a weaker vowel is common.[1]

However of particular note, one vowel usage is unique to West Kent which is the [ɒ] realization of the /ʌ/ phoneme.[citation needed].

A traditional Surrey accent again has r-coloured vowels while being entirely nonrhotic.

Estuary English is common throughout the county, particularly in the northern areas bordering on London, although many large settlements further south into Surrey, such as Guildford and Woking, share in variants of estuary English. Furthest north into Surrey is the borough of Spelthorne, where the accent is indistinguishable (as formerly part of Middlesex) from the London accent due to it sharing borders with the London boroughs of Hounslow, Richmond-upon-Thames and Hillingdon.

Jafaican, also known as Tikkiny or less commonly "Hood-Chat" is part accent, part dialect, from around the mid-1990s, and influenced not only by British black urban culture, but by rap music. This variant is used by the youth of all races as a 'street' patois, American English influences (such as the greeting "Yo!"), but also Caribbean patterns such as "aks" (rather than "ask"). The dialect is used mainly by young people, regardless of racial background. It can be heard in many parts of England, but especially around London.

This family of similar strongly rhotic accents, now perceived as rural, originally extended across much of southern England south of the broad A isogloss, but they are now most often found west of a line roughly from Shropshire via Oxfordshire. Their shared characteristics have been caricatured as Mummerset.

They persist most strongly in areas that remain largely rural with a largely indigenous population, particularly the West Country. In many other areas they are declining because of RP and Estuary accents moving to the area; for instance, strong Isle of Wight accents tend to be more prevalent in older speakers.

As well as rhoticity, here are common features of West County accents:

Features which can be found in East Anglian English (especially in Norfolk) include:

Retrieved from "http://en.turkcewiki.org/w/index.php?title=English_language_in_southern_England&oldid=965013626"
This website is a mirror of Wikipedia, and is not affiliated with the Wikimedia Foundation.
Categories:
Hidden categories: