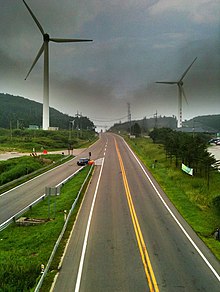 South Korea is a major energy importer, importing nearly all of its oil needs and the second-largest importer of liquefied natural gas in the world. Electricity generation in the country mainly comes from conventional thermal power, which accounts for more than two thirds of production, and from nuclear power.[1]

Energy producers were dominated by government enterprises, although privately operated coal mines and oil refineries also existed. The National Assembly enacted a broad electricity sector restructuring program in 2000, but the restructuring process was halted amid political controversy in 2004 and remains a topic of intense political debate.[2]

South Korea has no proven oil reserves.[1] Exploration until the 1980s in the Yellow Sea and on the continental shelf between Korea and Japan did not find any offshore oil. Coal supply in the country is insufficient and of low quality. The potential for hydroelectric power is limited because of high seasonal variations in the weather and the concentration of most of the rainfall in the summer. As of 2017, South Korean President Moon Jae-in has vowed to end the country’s reliance on coal and also said the nation would move away from nuclear energy. He has taken a major step in that direction in June, saying his country would not try to extend the life of its nuclear plants, would close existing coal-fired plants, and would not build any new coal plants.[3]

The Korea Electric Power Corporation (KEPCO) provided electricity in the country. When KEPCO's predecessor, KECO, was founded in 1961, annual power production was 1,770 GWh. Production reached 73,992 GWh in 1987. In that year, residential customers used 17.9% of total production, public and service businesses used 16.2%, and the industrial sector used 65.9%. Sources of power generation were primarily nuclear power, coal, oil, and liquefied natural gas. Of the 54,885 GWh of electricity generated in 1985, 22% came from nuclear plants then in operation, 74% from non-nuclear thermal plants (oil and coal), and 4% from hydroelectric sites. It was predicted in 1988 that the generation structure by the year 2000 would be 10.2% hydroelectric, 12.2% oil, 22.9% coal, 10.2% LNG, and 44.5% nuclear.

KOGAS (한국가스공사) acts as importer of LNG for the power generators.

South Korea placed a heavy emphasis on nuclear power generation. The country's first nuclear power plant, the Kori Number One located near Pusan, which opened in 1977. Eight plants operated in 1987 when atomic power generation was an estimated 71,158 million kilowatts, or 53.1% of total electric power.

The government decision in July 2008 to increase investment in renewable energy to reduce reliance on foreign oil imports may provide an incentive for conglomerates' solar plans.[7] The Ministry of Knowledge and Economy said the country intends to spend 194.4 billion won ($193 million) on technologies and projects, including solar, wind and biofuels, in 2008.[7]

South Korea is fast-growing gigawatt-market for photovoltaics (PV). In 2014, the country ranked among the world-leading top-ten installers of PV systems.[citation needed]

In December 2017, Hyundai Electric announced a plan to build a 150MW grid storage battery near Ulsan for Korea Zinc.[8]

Retrieved from "http://en.turkcewiki.org/w/index.php?title=Energy_in_South_Korea&oldid=918976954"
This website is a mirror of Wikipedia, and is not affiliated with the Wikimedia Foundation.
Categories:
Hidden categories: