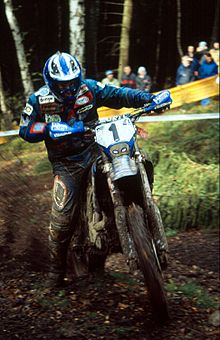 Enduro is a form of motorcycle sport run on extended cross-country, off-road courses.[1] Enduro consists of many different obstacles and challenges. The main type of enduro event, and the format to which the World Enduro Championship is run, is a time-card enduro, whereby a number of stages are raced in a time trial against the clock. 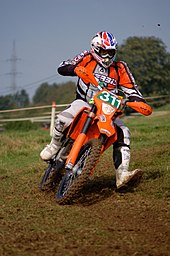 A KTM rider at the 2007 Enduro de Dinant

In a traditional time-keeping enduro, riders leave together in groups or rows, and each row starts at a certain minute.[1] The object of the event is to arrive at pre-defined checkpoints according to a strict schedule.[1] Early or late arrivals result in the riders' scores being penalized.[1] Throughout a day there will also be allocated periods for refuelling and servicing the machine. Penalties apply for not meeting defined times or for outside-assistance when not permitted.[2]

A world championship course must be at least 200 km and a maximum of 30% of its length can be on paved roads.[2] American Motorcycle Association (AMA) rules are different with respect to course length and other variables (i.e. average speed, terrain type, etc.). The rules of the regional sanctioning body can also affect the rules for a particular enduro course.[2]

Casual observers often confuse the two different types of events, enduros and rallies, but within the international off-road motorcycle community, the term enduro traditionally refers specifically to time keeping events which require competitors to maintain a prescribed mile per hour average over varying terrain. Competitors are moderated by a series of secret time keeping checkpoints along the race course, and are penalized based on their arrival time to the checkpoints.[3][4]

Rallies, on the other hand, are run on point to point courses where the competitor with the fastest time between the two points being declared the winner. Such courses may be shorter than the total length of the race, in which case the course is repeated several times, with each repetition being referred to as a lap. Such courses may also be very long such that competitors never cover the same ground twice.

In the US the rally format has greatly grown in popularity and is referred to as an "enduro" in many cases. The AMA National Enduro Series has used a similar format since 2007, referred to as "start-control / restart enduros". This format is believed to be more accessible for new riders by reducing the complexity of the race format in addition to making scoring easier for organizers.[5]

Certainly part of the confusion stems from the fact that rallies and enduros share two pronounced qualities; they are usually lengthy compared to most forms of motorsport racing and they cover varying off-road terrain, usually without repeating any section of the terrain in the course of an event. Examples of such rallies include the Baja 500 and Baja 1000, which are promoted and administered by SCORE International and are amongst the most well known long-distance off-road races. Off-road races that span multiple days and that have different types of stages, some that are timed and others that are not, are generally referred to as rallies (or rallyes) or rally raids (a term widely used in the United Kingdom that is synonymous with off-road rally) such as the Dakar Rally.

An enduro motorcycle is specialized for the nature of the sport, with the deep suspension of a motocross bike combined with the features required to make it legal for the public road portions of the course. Engines are generally single-cylinder two-stroke between 125 and 300 cm³ (cc), or four-stroke between 250 and 650 cm³ (cc). In 1973 Yamaha introduced a motorcycle for trail use which had the word enduro as a badge on its side panels. 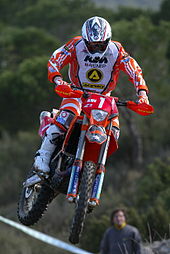 Samuli Aro riding his KTM in the world championship.

The World Enduro Championship (WEC) was started in 1990, replacing the European Enduro Championship, which had been contested since 1968. The championship is run under the FIM and generally consists of around eight or nine Grands Prix spread around the globe. These events are split into two days (and two different races), from which points towards the world championship are awarded. Each round includes a motocross test and an "extreme test", in addition to the enduro test. In the 2008 season, Honda's Mika Ahola won the Enduro 1 class, Yamaha's Johnny Aubert took the Enduro 2 class and KTM's Samuli Aro won his fifth title in the Enduro 3 class.

The World Enduro Super Series (WESS) is a championship started in 2018. All of the races in the series had been previously run as separate events, and this series brings in 11 races from around Europe to crown the World Enduro Champion. The best enduro riders from around the world come to compete in hare scrambles, hard enduros, classic enduros, etc. Red Bull covers the series on youtube and a WESS website is updated with the events schedule each year.

The International Six Days Enduro (ISDE) has been held since 1913, and it is the oldest off-road event in the FIM calendar. The event brings together the best riders to represent their national team, and it is often referred to as the "World Cup of Enduro" or the "Olympics of Motorcycling".

The American Motorcycle Association is the primary sanctioning body for motorcycle races of all types in the United States of America. AMA series are often analogous to FIM series. The East Coast Enduro Association is one of the most prominent organizers of enduro races in the US. The ECEA has multiple classes divided by bike type and rider demographic that allow a qualified rider to choose a class to compete in.

Each skill class (A, B, C) is divided into sub-classes depending on machine type, rider age, and gender. Some examples include "C 4-stroke," "C-Veteran (30+)," "B 2-Stroke Light," "B 2-Stroke Heavy," "Women's", etc... Generally speaking, there are rewards at both the event and season level for each sub-class (i.e., "I was the B 2-Stroke Light winner at this event..."). Classes include age brackets as high as 80+ (Legends class).

Because of the variety of awards that are possible, riders are sometimes accused of sandbagging.

In addition to races and series sanctioned by national associations, a large number of events are also held at the local and regional level by smaller governing bodies.

In the US these events closely resemble AMA sanctioned events, utilizing the same A, B, C skill classes. Many riders begin their racing careers at events such as these.

The popularity of enduro varies widely by continent, country, region, and even by event type. Some popular events are loosely categorized as enduros even though they fall into a category of off-road racing that is known as rally racing or rally raid.

In addition to rallying and rally raids, there are other off-road races that are very similar to enduros but that vary in that they are not necessarily timekeeping events and in that they are often sanctioned by other bodies than the primary enduro sanctioning bodies.

One example in the USA is the Grand National Cross Country, which more closely resembles hare scrambles, such as the Austrian Erzberg Rodeo than Enduros, but is on a shorter course of perhaps a few miles/kilometers in length that is repeated for several laps. GNCC is famous for the high level of ATV (four-wheeled off-road vehicles) competition in addition to motorcycle competition.

Endurocross or indoor enduro is a variation of enduro held indoors. Riders must complete as quick as possible a course with obstacles similar to those in enduro.

Retrieved from "http://en.turkcewiki.org/w/index.php?title=Enduro&oldid=1021058196"
This website is a mirror of Wikipedia, and is not affiliated with the Wikimedia Foundation.
Categories:
Hidden categories: