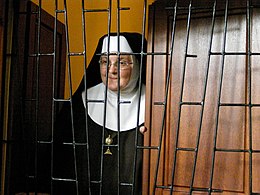 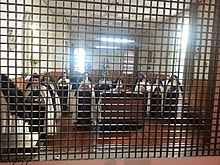 Discalced Carmelites convent of Santa Teresa de Jesús in Buenos Aires. View through the grille into the choir.

Enclosed religious orders of the Christian churches have solemn vows with a strict separation from the affairs of the external world. The term cloistered is synonymous with enclosed. In the Catholic Church enclosure is regulated by the code of canon law, either the Latin code or the Oriental code, and also by subsidiary legislation.[1][2] It is practised with a variety of customs according to the nature and charism of the community in question. 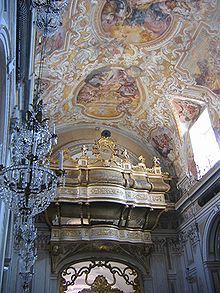 The nun's choir sung, unseen by the congregation, from the balcony in the Church of San Benedetto, Catania, Sicily

Especially for nuns, the separation very often involves physical barriers such as doors, walls, and grills. In many buildings holding enclosed orders, other people are admitted to some parts of the buildings for various purposes, but not other parts, the latter often being called the "enclosure". For example, when the public is admitted to services in a convent chapel, the nuns may be behind a grill, or one or other group restricted to a balcony. Sometimes all persons of the same sex were potentially admissable, but not those of the other sex.

The stated purpose for such enclosure is to prevent distraction from prayer and the religious life. Depending upon the reason and the length of time, the proper authority (usually the superior gets approval from the local bishop or the Holy See) can allow enclosed men or women to leave the enclosure "for a grave cause and with the consent of the superior". In the Catholic Church, this matter is regulated within the framework of canon law[3] and of the particular statutes approved by the Holy See.

Enclosed religious orders of men include monks following the Rule of Saint Benedict, namely the Benedictine, the Cistercian, and the Trappist Orders, but also monks of the Carthusians, Hieronymite monks, and some branches of Carmelites, along with members of the Monastic Family of Bethlehem, while enclosed religious orders of women include Canonesses Regular, nuns belonging to the Benedictine, Cistercian, Trappist and the Carthusian Orders, along with nuns of the second order of each of the mendicant orders, including: the Poor Clares, the Colettine Poor Clares, the Capuchin Poor Clares, the Dominicans, Carmelites, Servites, Augustinians, Minims, together with the Conceptionist nuns, the Visitandine nuns, Ursulines nuns (as distinct from "federated Ursulines" of the Company of St. Ursula) and women members of the Monastic Family of Bethlehem.

The English word monk most properly refers to men in monastic life, while the term friar more properly refers to mendicants active in the broader world (like Franciscans, Dominicans and Augustinians), though not all monasteries require strict enclosure. Benedictine monks, for instance, have often staffed parishes and been allowed to leave monastery confines.

Although the English word nun is often used to describe all Christian women who have joined religious institutes, strictly speaking, women are referred to as nuns only when they live in papal enclosure; otherwise, they are religious sisters.[4] The distinctions between the Christian terms monk, nun, friar, Brother, and Sister are sometimes easily blurred because some orders (such as the Dominicans or Augustinians) include nuns who are enclosed, who are usually grouped as the Second Order of that movement, and Religious Sisters who work in the broader world, who form a part of its Third Order.

In the Roman Rite of the Catholic Church, once a man or woman has made solemn, perpetual religious vows, the release from these monastic vows has to be approved by the ecclesiastical authorities. Normally there is a transitional period, called exclaustration, in which the person looks to establish a new life and determine if this is what he or she is truly called to do. This usually lasts up to six years under the current Code of Canon Law. After this period the appropriate authority, generally the Holy See, determines that the wish to leave this life is valid and grants the former monk or nun release from their vows.

Lutheran and Anglican religious orders have different procedures for the release from perpetual vows.

Contemplative orders[5] prioritise worship[6] and prayer over economic or outreach activity. They exist in the Roman Catholic, Anglican and Eastern Orthodox[7] traditions as well as in Buddhist[8] settings.

A photograph of a shackled nun standing before a senior sister at the Santa Teresa de Ávila Convent, Miajadas, Spain, (1922)

Repentance convents were a form of enclosed religious order in the late 19th and early 20th century Spain and Portugal that assisted in cleansing young women of the 'devil's tempations'. Often these were so-called fallen woman who had engaged in promiscuousness or prostitution.

In other cases, a very wealthy family would 'sacrifice' a female family member to the convent, as repentance for the family's sins. Very occasionally, young women would voluntarily admit themselves to the convent. All admissions to the convent were permanent and there was no way to leave. The possessions of the women admitted were confiscated and sold to benefit the convent, which was run by more senior nuns from influencial and wealthy families.

After being stripped of all possessions, the nun would be stripped naked and be placed in permanent shackles. Residents would often spend 24 hours a day chained to a wall in a cell. Corporal punishment was commonplace in order to 'beat the devil out of them'. Many nuns were forced to pray for mankind before the skulls of their predecessors, knowing sometime in the future, their own skulls will be placed in the walls, and their descendants would be forced to pray before them.

Retrieved from "http://en.turkcewiki.org/w/index.php?title=Enclosed_religious_orders&oldid=956470025"
This website is a mirror of Wikipedia, and is not affiliated with the Wikimedia Foundation.
Categories:
Hidden categories: