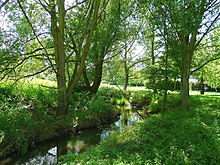 The Emm Brook, sometimes known as the Embrook[citation needed] or Emmbrook, is a small river in the English county of Berkshire. It is a tributary of the River Loddon which it meets at the village of Hurst.[1]

The Wokingham suburb of Emmbrook is named after the river.

The Emm Brook flows along the eastern boundary of The Emmbrook School.

The last major flood of the Emm Brook (now officially classified as a river) occurred on July 20, 2007. It was a flash flood that breached banks at the Emmbrook School (among others). It destroyed the ground floor rooms and computer suites of the Emmbrook School causing them to be totally rebuilt over the summer holiday. The school's starting date was postponed by two weeks in the next school year.

It passes through Dinton Pastures Country Park, where the original route has been diverted to enable gravel extraction in the 1970s.[2]

The water quality of the Emm Brook was as follows in 2016:

Retrieved from "http://en.turkcewiki.org/w/index.php?title=Emm_Brook&oldid=966298206"
This website is a mirror of Wikipedia, and is not affiliated with the Wikimedia Foundation.
Categories:
Hidden categories: