Jump to navigation Jump to search
For other uses, see Ejido (disambiguation).
Main articles: Land reform in Mexico and Agriculture in Mexico 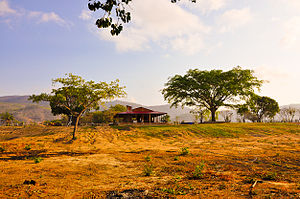 An ejido (Spanish pronunciation: [eˈxiðo], from Latin exitum) is an area of communal land used for agriculture in which community members have usufruct rights rather than ownership rights to land, which in Mexico is held by the Mexican state. People awarded ejidos in the modern era farm them individually in parcels and collectively maintain communal holdings with government oversight. Although the system of ejidos was based on an understanding of the preconquest Aztec calpulli and the medieval Spanish ejido,[1][2][3] in the twentieth century ejidos are government controlled. After the Mexican Revolution, ejidos were created by the Mexican state to grant lands to peasant communities as a means to stem social unrest. The awarding of ejidos made peasants dependent on the government, with the creation of a bureaucracy to register and regulate them through the National Agrarian Registry (Registro Agrario Nacional). As Mexico prepared to enter the North American Free Trade Agreement in 1991, President Carlos Salinas de Gortari declared the end of awarding ejidos and allowed existing ejidos to be rented or sold, ending land reform in Mexico.[4]

Mexico achieved its independence from Spain in 1821, following the Mexican War of Independence, the new sovereign nation abolished crown protections of natives and indigenous communities, making them equal before the law rather than vassals of the Spanish crown. The disappearance of the General Indian Court was one effect independence. With political instability and economic stagnation following independence, indigenous communities largely maintained their land holdings, since large landed estates were not expanding to increase production.

For nineteenth-century Mexican liberals, the continuing separateness of natives and indigenous villages from the Mexican nation was deemed "The Indian Problem," and the breakup of communal landholding identified as the key to integrating of Indians into the Mexican nation. When the Liberals came to power in 1855, they embarked on a major reform that included the expropriation and sale of corporate lands, that is, those held by indigenous communities and by the Roman Catholic Church. The Liberal Reform first put in place the Lerdo Law, calling for the end of corporate landholding and then incorporated that law into the Constitution of 1857. Ejidos were thus legally abolished, although many continued to survive.[7] Mexico was plunged into civil unrest, civil war, and a foreign invasion by the French, so not until the expulsion of the French in 1867 and the restoration of the Mexican republic under liberal control did land reform begin to take effect. Under liberal general Porfirio Díaz, who came to power by coup in 1876, policies to promote political stability and economic prosperity, "order and progress", meant that large haciendas began expanding and many villages lost their lands leaving the peasantry landless.

Many peasants participated in the Mexican Revolution, with the expectation that their village lands could be restored. In particular, many peasants in the state of Morelos under the leadership of Emiliano Zapata waged war against the presidency of Francisco I. Madero, a wealthy landowner whose reformist political movement sought to oust the regime of Porfirio Díaz; Victoriano Huerta, the leader of a reactionary coup that ousted and assassinated Madero; and Venustiano Carranza, a wealthy landowner who led the Constitutionalist faction, which defeated all others. In 1917, a new Constitution was drafted, which included empowerment of the government to expropriate privately held resources. Many peasants expected Article 27 of the Constitution to bring about the breakup of large haciendas and to return land to peasant communities. Carranza was entirely resistant to the expropriation of haciendas, and in fact returned many to their owners that had been seized by revolutionaries.

Distribution of large amounts of land did not begin until Lázaro Cárdenas became president in 1934. The ejido system was introduced as an important component of the land reform in Mexico. Under Cárdenas, land reform was "sweeping, rapid, and, in some respects, structurally innovative... he promoted the collective ejido (hitherto a rare institution) in order to justify the expropriation of large commercial estates."[8]

The typical procedure for the establishment of an ejido involved the following steps:

Ejidatarios do not actually own the land but are allowed to use their allotted parcels indefinitely as long as they do not fail to use the land for more than two years. They can pass their rights on to their children.

Opponents of the ejido system pointed to widespread corruption within the Banco Nacional de Crédito Rural (Banrural)—the primary institution responsible for providing loans to ejiditarios—illegal sales and transfers of ejido lands, ecological degradation, and low productivity as evidence of the system's failure, but defendants countered these arguments by pointing out that every administration since that of Cárdenas had been either indifferent or openly hostile to ejidos, that the land assigned to ejidos was often of lower quality and therefore inherently less productive than privately held land, that the majority of agricultural research and support was biased towards large-scale commercial enterprises, that the politicians complaining about Banrural were the people responsible for the corruption, and that, regardless of its productivity, subsistence production is an important survival strategy for many peasants.

As part of a larger program of neoliberal economic restructuring that had already been weakening support for ejidal and other forms of small-scale agriculture and negotiation of the North American Free Trade Agreement (NAFTA), President Carlos Salinas de Gortari in 1992 pushed legislation through Congress that modified article 27 of the Mexican Constitution to permit the privatization and the sale of ejidal land.[9] This was a direct cause of the Chiapas conflict.

The changes to the ejidal system have largely failed to improve ejidal productivity, and have been implicated as significant contributing factors to worsening rural poverty, forced migration, and the conversion of Mexico, where the cultivation of maize originated, into a net-importer of maize and food in general.[10]

Retrieved from "http://en.turkcewiki.org/w/index.php?title=Ejido&oldid=983501800"
This website is a mirror of Wikipedia, and is not affiliated with the Wikimedia Foundation.
Categories: