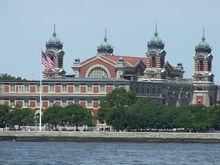 Edward Lippincott Tilton (19 October 1861 – January 1933) was an American architect, with a practice in New York City, where he was born.[1] He specialized in the design of libraries, completing about one hundred in the U.S. and Canada, including many Carnegie libraries and structures for educational institutions.[2]

In about 1881 Tilton abandoned a budding career in banking to serve as a draftsman in the offices of McKim, Mead, and White,[3] a traditional apprenticeship for which he prepared with a private tutor in architecture and which prepared him for a course of further study at the École des Beaux-Arts, Paris (1887–1890). Early commissions came through family connections; they included the casino (1891–92) in Belle Haven, an affluent shoreline community of Greenwich, Connecticut, and the Hotel Colorado in the resort of Glenwood Springs, Colorado (1891–93).[2]

He and the partner that he met in Paris, William A. Boring, won a competition in 1897 to design the first phase of new buildings for the U.S. Immigration Station on Ellis Island in New York Harbor. Four major buildings were all constructed to their designs before the formal partnership was amicably dissolved in 1904. The two architects continued to share an office.

He published his thoughts on library planning and construction, in Essentials in Library Planning with A.E. Bostwick and S.H Ranck (1928), and "Library Planning" posthumously published in the Journal of the Royal Institute of British Architects (1936).

Retrieved from "http://en.turkcewiki.org/w/index.php?title=Edward_Lippincott_Tilton&oldid=962896690"
This website is a mirror of Wikipedia, and is not affiliated with the Wikimedia Foundation.
Categories:
Hidden categories: