The Edmonton Public Library (EPL) is a publicly funded library system in the city of Edmonton, Alberta, Canada, available for use by any member of the public. Library cards are free to all Edmontonians; as part of its centennial, the Edmonton Public Library eliminated membership fees on cards registered in 2013 and customers who have registered since.[3] University of Alberta and MacEwan University students can receive free access using the L-Pass program.[4][5]

EPL has more than 16.6 million items in its collection including books, CDs, DVDs, magazines, video games, and online resources.[1] There are 21 branches, the oldest of which is the Old Strathcona Branch, opened in 1913. The newest is the Londonderry Mall replacement branch, which opened in August 13, 2018.[6]

The history of the Edmonton Public Library (EPL) begins in 1912, when the cities of Edmonton and Strathcona began to consider the creation of two public libraries in the region. By the time the two libraries opened in 1913, Edmonton and Strathcona had amalgamated, and so one fledgling library system started with two branches.[7] The Strathcona branch was the only branch to the south of the North Saskatchewan River that divides the city of Edmonton, and it would remain so until 1955. The branch on the north side of the river was temporarily located in the Chisholm Block, above a meat shop and a liquor store.[8]

Between the years of 1914 and 1923, the Edmonton branch operated out of various buildings in the downtown area. In 1923, the Central Library building was opened with help from a Carnegie library grant, which sat on the site now occupied by Telus Plaza. It would remain in service until 1967, when the Centennial Library opened on Sir Winston Churchill Square, only a few blocks away, remaining in downtown Edmonton.[8]

Beginning in 1941, the Edmonton Public Library began to operate traveling services to meet the needs of the community. The first service operated out of a streetcar. In 1947, trucks and buses were pressed into service as bookmobiles. These were replaced by book trailers in 1974, some of which were decommissioned in 1982 as a cost-saving measure. These decommissioned trailers were replaced by the more traditional bookmobile format. 1982 also saw the implementation of data radio in the bookmobiles, which enabled them to communicate directly with the main EPL database. This allowed staff to utilize the electronic database and to review customer accounts from the bookmobile itself. The bookmobiles remained in service until 1991, when they were decommissioned.[8][9] In 2014, traveling services were reintroduced with the launch of epl2GO literacy vans.[1]

Between 1950 and 1970, seven branches were opened throughout the city of Edmonton, followed by five more between 1970 and 1990. In 1996, the main branch located at the Centennial Library was renamed the Stanley A. Milner Library in honor of the chair of the library board from 1963 to 1968, who had worked so hard to make the Centennial Library become a reality.[8]

Currently, the Edmonton Public Library operates 21 branches and continues to expand with the City of Edmonton. 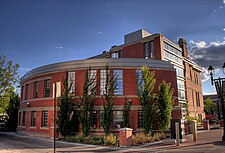 Edmonton Public Library currently has 21 branches across Edmonton, including two new branches opened in 2014 in Clareview Town Centre and The Meadows. These combine library branches with sports and recreation centres.[10] In 2000, 5 branches were in malls, and they were Abbotsfield, Capilano, Londonderry, Mill Woods, and Southgate. The first to leave was Southgate which closed in 2002 and became Whitemud Crossing. Abbotsfield & Mill Woods relocated to nearby locations in 2010 and 2015, and in 2019 Capilano relocated to a standalone building in the same area. As of 2019, the only branch located inside a mall is Londonderry. In 2018, the Londonderry Branch moved to a new location within Londonderry Mall, which is more accessible and modern.

In addition to a large collection of items, the libraries offer services to people with special needs including: braille materials, large-print materials, talking books, descriptive DVDs and home service for those unable to visit the library. It also offers assistive technologies for customers such as: TTY for the deaf, closed circuit TVs that enlarge or enhance print, magnifiers, specialized software, LEAP computer work stations, and alternative keyboards.[18]

EPL delivers free programs and events for preschoolers, children, teens, and adults in all of its branches. Program information is provided in the "Library Guide" printed three times per year, and through the EPL website.[19] Services include:

The Edmonton Public Library maintains partnerships with the University of Alberta, Edmonton Public Schools, Edmonton Catholic Schools, the Centre for Family Literacy, the Arts District, and the Edmonton Transit Service. Each branch is assigned a regional list of public and Catholic schools for which is provides many services. EPL also works with community groups such as the Mennonite Centre for Newcomers, Multicultural Health Brokers and a variety of literacy-based organizations.

EPL is a member of "The Alberta Library" (TAL), a province-wide system that allows access to material from every member library in Alberta.[22] EPL is also a member of the Metro Edmonton Foundation of Libraries.[8]

Retrieved from "http://en.turkcewiki.org/w/index.php?title=Edmonton_Public_Library&oldid=962919231"
This website is a mirror of Wikipedia, and is not affiliated with the Wikimedia Foundation.
Categories:
Hidden categories: