The economy of Norway is a developed mixed economy with state-ownership in strategic areas. Although sensitive to global business cycles, the economy of Norway has shown robust growth since the start of the industrial era. The country has a very high standard of living compared with other European countries, and a strongly integrated welfare system. Norway's modern manufacturing and welfare system rely on a financial reserve produced by exploitation of natural resources, particularly North Sea oil.[18][19][20][21][22] According to United Nations data for 2016, Norway together with Luxembourg (a small state) and Switzerland are the only three countries in the world with a GDP per capita above US$70,000 that are neither island nations nor microstates.[23]

Prior to the industrial revolution, Norway's economy was largely based on agriculture, timber, and fishing. Norwegians typically lived under conditions of considerable scarcity, though famine was rare. Except for certain fertile areas in Hedemarken and Østfold, crops were limited to hardy grains, such as oats, rye, and barley; and livestock to sheep, goats, cattle, pigs, and some poultry; in places this was complemented with hunting. In areas of Central and Northern Norway, the Sami subsisted on the nomadic herding of reindeer. Fishing all around the coast was dangerous work, though fish such as herring, cod, halibut, and other cold-water species were found in abundance. The introduction of the potato to Norway (in the 18th century) provided considerable relief for Norwegians.

All around the coast, the harvesting of fish (including cod, herring, halibut, and other cold water species) was an important supplement to farming and was in many areas in the north and west the primary household subsistence. Fishing was typically supplemented with crop-growing and the raising of livestock on small farms.

The economic conditions in Norway did not lend themselves to the formation of feudal system, though several kings did reward land to loyal subjects who became knights. Self-owning farmers were—and continue to be—the main unit of work in Norwegian agriculture, but leading up to the 19th century farmers ran out of land available for farming. Many agricultural families were reduced to poverty as tenant farmers, and served as the impetus for emigration to North America.

Aside from mining in Kongsberg, Røros and Løkken, industrialization came with the first textile mills that were built in Norway in the middle of the 19th century. But the first large industrial enterprises came into formation when entrepreneurs' politics led to the founding of banks to serve those needs.

Industries also offered employment for a large number of individuals who were displaced from the agricultural sector. As wages from industry exceeded those from agriculture, the shift started a long-term trend of reduction in cultivated land and rural population patterns. The working class became a distinct phenomenon in Norway, with its own neighborhoods, culture, and politics.

After World War II, the Norwegian Labour Party, with Einar Gerhardsen as prime minister, embarked on a number of social democratic reforms aimed at flattening the income distribution, eliminating poverty, ensuring social services such as retirement, medical care, and disability benefits to all, and putting more of the capital into the public trust.

Highly progressive income taxes, the introduction of value-added tax, and a wide variety of special surcharges and taxes made Norway one of the most heavily taxed economies in the world. Authorities particularly taxed discretionary spending, levying special taxes on automobiles, tobacco, alcohol, cosmetics, etc.

Norway's long-term social democratic policies, extensive governmental tracking of information, and the homogeneity of its population lent themselves particularly well for economic study, and academic research from Norway proved to make significant contributions to the field of macroeconomics during this era. When Norway became a petroleum-exporting country, the economic effects came under further study.

In May 1963, Norway asserted sovereign rights over natural resources in its sector of the North Sea. Exploration started on 19 July 1966, when Ocean Traveler drilled its first well.[citation needed] Oil was first encountered at the Balder oil field at flank of the Utsira High, about 190 km west of Stavanger, in 1967.[24] Initial exploration was fruitless, until Ocean Viking found oil on 21 August 1969.[citation needed] By the end of 1969, it was clear that there were large oil and gas reserves in the North Sea. The first oil field was Ekofisk, produced 427,442 barrels (67,957.8 m3) of crude in 1980. Since then, large natural gas reserves have also been discovered.

Against the backdrop of the Norwegian referendum to not join the European Union, the Norwegian Ministry of Industry, headed by Ola Skjåk Bræk moved quickly to establish a national energy policy. Norway decided to stay out of OPEC, keep its own energy prices in line with world markets, and spend the revenue – known as the "currency gift" – wisely. The Norwegian government established its own oil company, Statoil, and awarded drilling and production rights to Norsk Hydro and the newly formed Saga Petroleum. Petroleum exports are taxed at a marginal rate of 78% (standard corporate tax of 24%, and a special petroleum tax of 54%).[25]

The North Sea turned out to present many technological challenges for production and exploration, and Norwegian companies invested in building capabilities to meet these challenges. A number of engineering and construction companies emerged from the remnants of the largely lost shipbuilding industry, creating centers of competence in Stavanger and the western suburbs of Oslo. Stavanger also became the land-based staging area for the offshore drilling industry. Presently North Sea is past its peak oil production. New oil and gas fields have been found and developed in the large Norwegian areas of the Norwegian Sea and the Barents Sea, including Snøhvit. 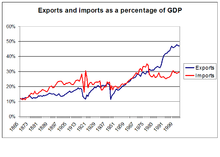 Exports and imports in Norway

Although Norway's trade policies have long aimed at harmonizing its industrial and trade policy with the EU's, a new referendum in 1994 gave the same result as in 1972, and Norway remains one of only two Nordic countries outside the EU, the other being Iceland.

Although much of the highly divisive public debate about EU membership turned on political rather than economic issues, it formed economic policy in several important ways:

Norwegians have sought accommodations on a range of specific issues, such as products from fish farms, agricultural products, emission standards, etc., but these do not appear to differ substantially from those sought by bona fide EU members. It is expected that the issue of membership will be brought to a referendum again at some point.

The Labour productivity level of Norway is second highest in Europe. OECD, 2015[26]

Several issues have dominated the debate on Norway's economy since the 1970s:

The Norwegian state maintains large ownership positions in key industrial sectors concentrated in natural resources and strategic industries such as the strategic petroleum sector (Equinor), hydroelectric energy production (Statkraft), aluminum production (Norsk Hydro), the largest Norwegian bank (DNB) and telecommunication provider (Telenor). The government controls around 35% of the total value of publicly listed companies on the Oslo stock exchange, with five of its largest seven listed firms partially owned by the state.[28] When non-listed companies are included the state has an even higher share in ownership (mainly from direct oil license ownership). Norway's state-owned enterprises comprise 9.6% of all non-agricultural employment, a number that rises to almost 13% when companies with minority state ownership stakes are included, the highest among OECD countries.[29] Both listed and non-listed firms with state ownership stakes are market-driven and operate in a highly liberalized market economy. The combination of relatively high degrees of state ownership in the Norwegian open-market economy has been described as a form of state capitalism.[30]

The oil and gas industries play a dominant role in the Norwegian economy, providing a source of finance for the Norwegian welfare state through direct ownership of oil fields, dividends from its shares in Equinor, and licensure fees and taxes. The oil and gas industry is Norway's largest in terms of government revenue and value-added. The organization of this sector is designed to ensure the exploration, development and extraction of petroleum resources result in public value creation for the entire society through a mixture of taxation, licensing and direct state ownership through a system called the State’s Direct Financial Interest (SDFI). The SDFI was established in 1985 and represents state-owned holdings in a number of oil and gas fields, pipelines and onshore facilities as well as 67% of the shares in Equinor. Government revenues from the petroleum industry are transferred to the Government Pension Fund of Norway Global in a structure that forbids the government from accessing the fund for public spending; only income generated by the funds' capital can be used for government spending.[31]

The high levels of state ownership have been motivated for a variety of reasons, but most importantly by a desire for national control of the utilization of natural resources. Direct state involvement began prior to the 20th century with the provision of public infrastructure, and expanded greatly into industry and commercial enterprises after the Second World War through the acquisition of German assets in several manufacturing companies. The largest expansion of state ownership occurred with the establishment of Statoil in 1972. Industries and commercial enterprises where the state owns stakes are highly liberalized and market-driven, with marketization extending to public service providers as well as industry.[32]

The emergence of Norway as an oil-exporting country has raised a number of issues for Norwegian economic policy. There has been concern that much of Norway's human capital investment has been concentrated in petroleum-related industries. Critics have pointed out that Norway's economic structure is highly dependent on natural resources that do not require skilled labor, making economic growth highly vulnerable to fluctuations in the demand and pricing for these natural resources. The Government Pension Fund of Norway is part of several efforts to hedge against dependence on petroleum revenue.

Because of the oil boom since the 1970s, there has been little government incentive to help develop and encourage new industries in the private sector, in contrast to other Nordic countries like Sweden and particularly Finland. However the last decades have started to see some incentive on national and local government levels to encourage formation of new "mainland" industries that are competitive internationally. In addition to aspirations for a high-tech industry, there is growing interest in encouraging small business growth as a source of employment for the future. In 2006, the Norwegian government formed nine "centers of expertise" to facilitate this business growth.[34] Later in June 2007, the government contributed to the formation of the Oslo Cancer Cluster (OCC) as a center of expertise, capitalizing on the fact that 80% of cancer research in Norway takes place in proximity to Oslo and that most Norwegian biotechnology companies are focused on cancer.[34]

Retrieved from "http://en.turkcewiki.org/w/index.php?title=Economy_of_Norway&oldid=967552702"
This website is a mirror of Wikipedia, and is not affiliated with the Wikimedia Foundation.
Categories:
Hidden categories: