The economy of Mali is based to a large extent upon agriculture, with a mostly rural population engaged in subsistence agriculture.

Mali is among the ten poorest nations of the world, is one of the 37 Heavily Indebted Poor Countries, and is a major recipient of foreign aid from many sources, including multilateral organizations (most significantly the World Bank, African Development Bank, and Arab Funds), and bilateral programs funded by the European Union, France, United States, Canada, Netherlands, and Germany. Before 1991, the former Soviet Union, China and the Warsaw Pact countries had been a major source of economic and military aid.

The per capita gross domestic product (GDP) of Mali was $820 in 1999. Mali's great potential wealth lies in mining and the production of agricultural commodities, livestock, and fish. The most productive agricultural area lies along the banks of the Niger River, the Inner Niger Delta and the southwestern region around Sikasso.

This is a chart of trend of gross domestic product of Mali at market prices estimated by the International Monetary Fund with figures in millions of CFA Francs.[8] 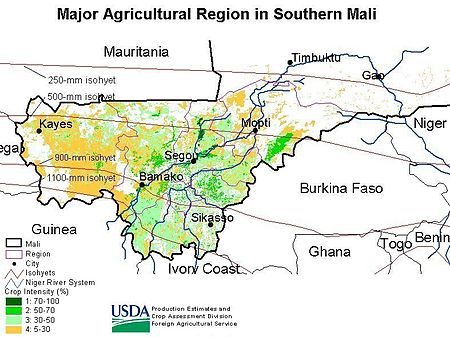 The major agricultural region in southern Mali, showing isohyet lines and crop intensity percentages. Mali's most productive agricultural region is located between Bamako and Mopti. Irrigation water is used mainly for rice while cotton is grown as a rainfed crop. (USDA: 2001)

Agricultural activities occupy 70% of Mali's labor force and provide 42% of the GDP. Cotton and livestock make up 75%–80% of Mali's annual exports. Small-scale traditional farming dominates the agricultural sector, with subsistence farming (of cereals, primarily sorghum, pearl millet, and maize) on about 90% of the 14,000 square kilometres (1,400,000 ha; 3,500,000 acres) under cultivation.

The most productive agricultural area lies along the banks of the Niger River between Bamako and Mopti and extends south to the borders of Guinea, Ivory Coast, and Burkina Faso. Average rainfall varies in this region from 500 mm (20 in) per year around Mopti to 1,400 mm (55 in) in the south near Sikasso. This area is most important for the production of cotton, rice, pearl millet, maize, vegetables, tobacco and tree crops.

Annual rainfall, critical for Mali's agriculture, has been at or above average since 1993. Cereal production, including rice, has grown annually, and the 1997–98 cotton harvest reached a record 500,000 tons.

Until the mid-1960s, Mali was self-sufficient in grains — pearl millet, sorghum, rice and maize. Diminished harvests during bad years, a growing population, changing dietary habits, and, most importantly, policy constraints on agricultural production resulted in grain deficits almost every year from 1965 to 1986.

Production has rebounded since 1987 due to agricultural policy reforms undertaken by the government and supported by the Western donor nations. Liberalization of producer prices and an open cereals market have created incentives to production. These reforms, combined with adequate rainfall, successful integrated rural agriculture programs in the south, and improved management of the Office du Niger, have led to surplus cereal production over the past five years. 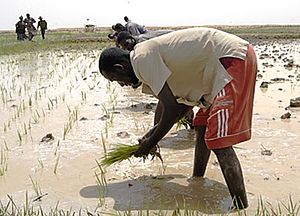 Sorghum is planted extensively in the drier parts of the country and along the banks of the Niger in eastern Mali, as well as in the lake beds in the Niger delta region. During the wet season, farmers near the town of Dire have cultivated wheat on irrigated fields for hundreds of years. Peanuts are grown throughout the country but are concentrated in the area around Kita, west of Bamako.

Mali's resource in livestock consists of millions of cattle, sheep, and goats. Approximately 40% of Mali's herds were lost during the great drought in 1972–74. The level was gradually restored, but the herds were again decimated in the 1983–85 drought. The overall size of Mali's herds is not expected to reach pre-drought levels in the north of the country, where encroachment of the desert has forced many nomadic herders to abandon pastoral activities and turn instead to farming.

The largest concentrations of cattle are in the areas north of Bamako and Ségou extending into the Niger delta, but herding activity is gradually shifting southward, due to the effects of previous droughts. Sheep, goats, and camels are raised to the exclusion of cattle in the dry areas north and east of Timbuktu. 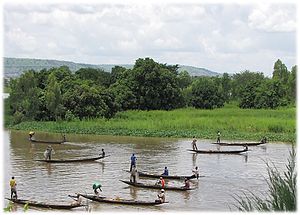 Fishermen on a river in Mali.

The Niger River is also an important source of fish, providing food for riverside communities; the surplus—smoked, salted, and dried—is exported. Due to drought and diversion of river water for agriculture, fish production has steadily declined since the early 1980s. 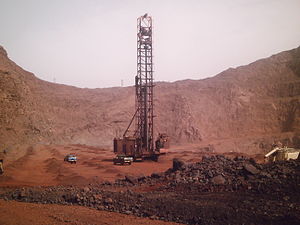 Drilling for oil in the Taoudeni basin.

Mining has long been an important aspect of the Malian economy. Gold, largest source of Malian exports[10], is still mined in the southern region: at the end of the 20th century Mali had the third highest gold production in Africa (after South Africa and Ghana).[11] These goldfields, the largest of which lie in the Bambouk Mountains in western Mali (Kenieba Cercle), were a major source of wealth and trade as far back as the Ghana Empire.

Salt mining in the far north, especially in the Saharan oases of Taoudenni and Taghaza have been a crucial part of the Malian economy for at least seven hundred years. Both resources were vital components of the Trans-Saharan trade, stretching back to the time of the Roman Empire.

From the 1960s to the 1990s state owned mining—especially for gold—expanded, followed by a period of expansion by international contract mining.

In 1991, following the lead of the International Development Association, Mali relaxed the enforcement of mining codes which led to greater foreign investment in the mining industry.[12] From 1994 to 2007, national and foreign companies were granted around 150 operating licences along with more than 25 certificates for exploitation and more than 200 research permits. Gold mining in Mali has increased dramatically, with more than 50 tonnes in 2007 from less than half a tonne produced annually at the end of the 1980s. Mining revenue totaled some 300 billion CFA francs in 2007 more than a thirty times increase from the 1995 total national mining revenue of less than 10 billion CFA. Government revenues from mining contracts, less than 1% of the state income in 1989 were almost 18% in 2007.[13]

Mali is also endowed with renewable energy resources. The country will be among potential winners after the global transition to renewable energy is finished; it is ranked no. 11 out of 156 nations in the index of geopolitical gains and losses after energy transition (GeGaLo Index).[14]

Gold accounted for some 80% of mining activity in the mid-2000s, while there remain considerable proven reserves of other minerals not currently exploited. Gold has become Mali's largest export[10], after cotton—historically the basis of Mali's export industry—and livestock. The emergence of gold as Mali's leading export product since 1999 has helped mitigate some of the negative impacts caused by fluctuations in world cotton markets and loss of trade from the Ivorian Civil War to the south.[15] Large private investments in gold mining include Anglogold-Ashanti ($250 million) in Sadiola and Yatela, and Randgold Resources ($140 million) in Morila – both multinational South African companies located respectively in the north-western and southern parts of the country.

While great incomes are produced, most staff employed in the mining industries are from outside Mali, and residents in the areas of intensive mining complain of little benefit from the industry. Populations complain of displacement for the construction of mines: at Sadiola Gold Mine, 43 villages have lost some land to the mine there, while in Fourou, near the large Syama goldmines, 121 villages saw some displacement.[16]

In addition, the continued exploitation of unregulated small scale mining, often by child laborers, supplies a large international gold market in Bamako which feeds into international production.[17] Recent criticism has surfaced around the working conditions, pay, and the widespread use of child labor in these small gold mines (as reported recently in the U.S. Department of Labor's List of Goods Produced by Child Labor or Forced Labor),[18][19] and the method with which middlemen, in regional centers like Sikasso and Kayes, purchase and transport gold. Gold collected in the towns is sold on—with almost no regulation or oversight—to larger merchant houses in Bamako or Conakry, and eventually to smelters in Europe.[20] Ecological factors, especially pollution of water by mine tailings, is a major source of concern.

Other mining operations include kaolin, salt, phosphate, and limestone.[21] The government is trying to generate interest in the potential of extracting petroleum from the Taoudeni basin.[22]

During the colonial period, private capital investment was virtually nonexistent, and public investment was devoted largely to the Office du Niger irrigation scheme and to administrative expenses. Following independence, Mali built some light industries with the help of various donors. Manufacturing, consisting principally of processed agricultural products, accounted for about 8% of the GDP in 1990. 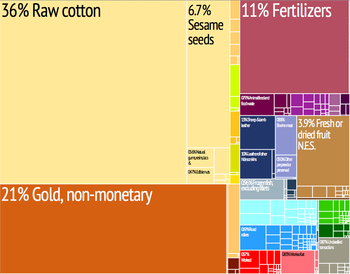 A proportional representation of Mali's exports.

Between 1992 and 1995, Mali implemented an economic adjustment program that resulted in economic growth and a reduction in financial imbalances. This was reflected in the increased GDP growth rates (9.6% in 2002) and decreased inflation. GDP in 2002 amounted to US$3.2 billion, made up of agriculture 37.8%, industry 26.4% and services 35.9%.

Effective implementation of macroeconomic stabilization and economic liberalization policies and the stable political situation resulted in good economic performance and enabled Mali to strengthen the foundations for a market-oriented economy and encourage private sector development, backed up by significant progress in implementing the country's privatization program. Agricultural reform measures were aimed at diversifying and expanding production as well as at reducing costs.

Mali's economic performance is fragile, characterized by a vulnerability to climatic conditions, fluctuating terms of trade, dependence on ports in neighboring countries.

Mali produces cotton, cereals and rice. Although locally produced rice now provides competition to imported Asian rice, Mali's primary export is cotton. Livestock exports and industry (producing vegetable and cottonseed oils, and textiles) have experienced growth. Although most of Mali is desert or semi-desert, the Niger River is a potential irrigation source. Exports are in three primary sector products (56% gold, 27% cotton, 5% livestock). Ivory Coast is where most of the country's trade goes through and the crisis previously experienced here had a negative effect on Mali's economy.

The mining industry in Mali has recently attracted renewed interest and investment from foreign companies. Gold and phosphate are the only minerals mined in Mali although deposits of copper and diamonds do also exist. The emergence of gold as Mali's leading export product since 1999 has helped mitigate some of the negative impact of the cotton and Ivory Coast crises.

The development of the oil industry is important due to the country's dependence on the importation of all petroleum products from neighbouring states. Electricity is provided by the parastatal utility, Electricite du Mali.

Mali residents are mostly French speaking. Mali is a major recipient of foreign aid from many sources, including multilateral organizations (most significantly the World Bank, African Development Bank, and Arab Funds), and bilateral programs funded by the European Union, France, United States, Canada, Netherlands, and Germany. Cooperation from Brazil has been growing quickly, especially in cotton production, by means of developing cotton seeds adapted to the Malian soil. Since 2009, Brazilian cooperation in Mali has raised the quality of the cotton fields and their productivity. Brazilian aide has also started since 2019 in cattle raising and the recovery of eroded soils for agriculture. Before 1991, the former Soviet Union had been a major source of economic and military aid, including construction of a cement plant and the Kalana gold mine.

Currently, aid from Russia is restricted mainly to training and provision of spare parts. Chinese aid remains high, and Chinese-Malian joint venture companies have become more numerous in the last 3 years, leading to the opening of a Chinese investment center. The Chinese are major participants in the textile industry and in large scale construction projects, including a bridge across the Niger, a conference center, an expressway in Bamako, and a new national stadium scheduled to be completed for the Africa Cup competition in 2002. 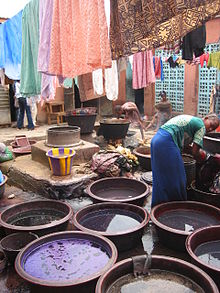 Dyeing bezin, one of several types of cloth made in Mali. 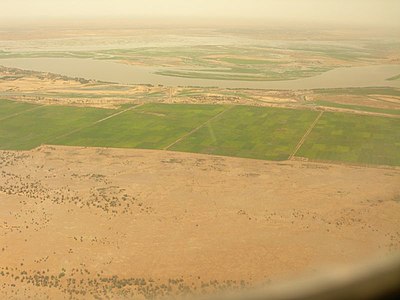 Retrieved from "http://en.turkcewiki.org/w/index.php?title=Economy_of_Mali&oldid=942331688"
This website is a mirror of Wikipedia, and is not affiliated with the Wikimedia Foundation.
Categories:
Hidden categories: