Jump to navigation Jump to search
Measure, which allows statements about the economic situation in general of national economies

Equities as leading, GDP as coincident, and business credit as lagging indicator.

Economic indicators can be classified into three categories according to their usual timing in relation to the business cycle: leading indicators, lagging indicators, and coincident indicators.

The Index of Lagging Indicators is published monthly by The Conference Board, a non-governmental organization, which determines the value of the index from seven components.

The Index tends to follow changes in the overall economy.

The components on the Conference Board's index are: 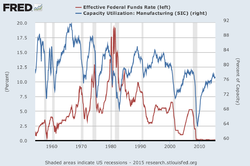 Federal Funds Rate in the USA lagging behind capacity utilization in manufacturing.

Coincident indicators change at approximately the same time as the whole economy, thereby providing information about the current state of the economy. There are many coincident economic indicators, such as Gross Domestic Product, industrial production, personal income and retail sales. A coincident index may be used to identify, after the fact, the dates of peaks and troughs in the business cycle.[4]

There are four economic statistics comprising the Index of Coincident Economic Indicators:[5]

There are also three terms that describe an economic indicator's direction relative to the direction of the general economy: 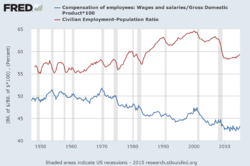 The wage share (arguably) as countercyclical, but also as a lagging indicator with respect to the employment rate as procyclical indicator in the USA

Retrieved from "http://en.turkcewiki.org/w/index.php?title=Economic_indicator&oldid=954306650"
This website is a mirror of Wikipedia, and is not affiliated with the Wikimedia Foundation.
Categories:
Hidden categories: