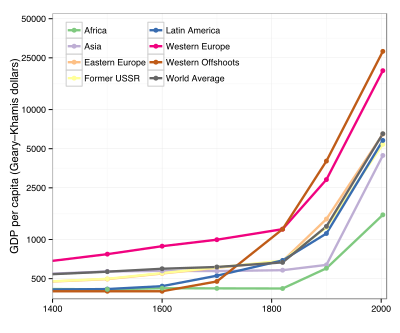 Economic history is the academic study of economies or economic events of the past. Research is conducted using a combination of historical methods, statistical methods and the application of economic theory to historical situations and institutions. The field can encompass a wide variety of topics, including equality, finance, technology, labor, and business. It emphasizes historicizing the economy itself, analyzing it as a dynamic force and attempting to provide insights into the way it is structured and conceived.

Using both quantitative data and qualitative sources, economic historians emphasize understanding the historical context in which major economic events take place. They often focus on the institutional dynamics of systems of production, labor, and capital, as well as the economy's impact on society, culture, and language. Scholars of the discipline may approach their analysis from the perspective of different schools of economic thought, such as mainstream economics, Marxian economics, the Chicago school of economics, and Keynesian economics.

Early history of the discipline[edit] 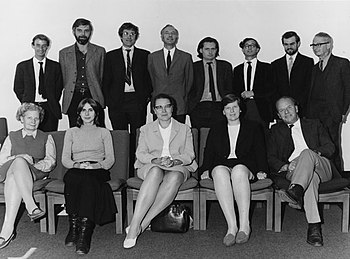 In late-nineteenth-century Germany, scholars at a number of universities, led by Gustav von Schmoller, developed the historical school of economic history. It argued that there were no universal truths in history, emphasizing the importance of historical context without quantitative analysis. This historical approach dominated German and French scholarship for most of the 20th century. The historical school of economics included other economists such as Max Weber and Joseph Schumpeter who reasoned that careful analysis of human actions, cultural norms, historical context, and mathematical support was key to historical analysis. The approach was spread to Great Britain by William Ashley (University of Oxford) and dominated British economic history for much of the 20th century. Britain's first professor in the subject was George Unwin at the University of Manchester.[3][4] Meanwhile, in France, economic history was heavily influenced by the Annales School from the early 20th century to the present. It exerts a worldwide influence through its journal Annales. Histoire, Sciences Sociales.[5]

In the United States, the field of economic history was largely subsumed into other fields of economics following the cliometric revolution of the 1960s. To many it became seen as a form of applied economics rather than a stand-alone discipline. Cliometrics, also known as the New Economic History, refers to the systematic use of economic theory and econometric techniques to the study of economic history. The term was originally coined by Jonathan R. T. Hughes and Stanley Reiter and refers to Clio, who was the muse of history and heroic poetry in Greek mythology. One of the most famous cliometric economic historians is Douglass North, who argued that it is the task of economic history to elucidate the historical dimensions of economies through time.[6] Cliometricians argue their approach is necessary because the application of theory is crucial in writing solid economic history, while historians generally oppose this view warning against the risk of generating anachronisms.

Early cliometrics was a type of counterfactual history. However, counterfactualism was not its distinctive feature; it combines neoclassical economics with quantitative methods in order to explain human choices based on constraints.[7] Some have argued that cliometrics had its heyday in the 1960s and 1970s and that it is now neglected by economists and historians.[8] In response to North and Robert Fogel's Nobel Memorial Prize in Economics in 1993, Harvard University economist Claudia Goldin argued that:

The study of dis-equilibrium may proceed in either of two ways. We may take as our unit for study an actual historical case of great dis-equilibrium, such as, say, the panic of 1873; or we may take as our unit for study any constituent tendency, such as, say, deflation, and discover its general laws, relations to, and combinations with, other tendencies. The former study revolves around events, or facts; the latter, around tendencies. The former is primarily economic history; the latter is primarily economic science. Both sorts of studies are proper and important. Each helps the other. The panic of 1873 can only be understood in light of the various tendencies involved—deflation and other; and deflation can only be understood in the light of various historical manifestations—1873 and other.[12]

Scope and focus of the discipline today[edit]

Despite the pessimistic view on the state of the discipline espoused by many of its practitioners, economic history remains an active field of social scientific inquiry. Indeed, it has seen something of a resurgence in interest since 2000, perhaps driven by research conducted at universities in continental Europe rather than the UK and the US.[14]

Part of the growth in economic history is driven by the continued interest in big policy-relevant questions on the history of economic growth and development. MIT economist Peter Temin noted that development economics is intricately connected with economic history, as it explores the growth of economies with different technologies, innovations, and institutions.[15] Studying economic growth has been popular for years among economists and historians who have sought to understand why some economies have grown faster than others. Some of the early texts in the field include Walt Whitman Rostow's The Stages of Economic Growth: A Non-Communist Manifesto (1971) which described how advanced economies grow after overcoming certain hurdles and advancing to the next stage in development. Another economic historian, Alexander Gerschenkron, complicated this theory with works on how economies develop in non-Western countries, as discussed in Economic Backwardness in Historical Perspective: A Book of Essays (1962). A more recent work is Daron Acemoglu and James A. Robinson's Why Nations Fail: The Origins of Power, Prosperity, and Poverty (2012) which pioneered a new field of persistence studies, emphasizing the path-dependent stages of growth. Other notable books on the topic include Kenneth Pomeranz's The Great Divergence: China, Europe, and the Making of the Modern World Economy (2000) and David S. Landes's The Wealth and Poverty of Nations: Why Some are So Rich and Some So Poor (1998).

In recent decades, and notably since the global financial crisis of 2007–2008, scholars have recently become more interested in a field which may be called new new economic history. Scholars have tended to move away from narrowly quantitative studies toward institutional, social, and cultural history affecting the evolution of economies.[16][a 1] Columbia University economist Charles Calomiris argued that this new field showed 'how historical (path-dependent) processes governed changes in institutions and markets.'[17] However, this trend has been criticized, most forcefully by Francesco Boldizzoni, as a form of economic imperialism "extending the neoclassical explanatory model to the realm of social relations."[18]

Conversely, economists in other specializations have started to write a new kind of economic history which makes use of historical data to understand the present day.[a 2] A major development in this genre was the publication of Thomas Piketty's Capital in the Twenty-First Century (2013). The book described the rise in wealth and income inequality since the 18th century, arguing that large concentrations of wealth lead to social and economic instability. Piketty also advocated a system of global progressive wealth taxes to correct rising inequality. The book was selected as a New York Times best seller and received numerous awards. The book was well received by some of the world's major economists, including Paul Krugman, Robert Solow, and Ben Bernanke.[19] Books in response to Piketty's book include After Piketty: The Agenda for Economics and Inequality, by Heather Boushey, J. Bradford DeLong, and Marshall Steinbaum (eds.) (2017), Pocket Piketty by Jesper Roine (2017), and Anti-Piketty: Capital for the 21st Century, by Jean-Philippe Delsol, Nicolas Lecaussin, Emmanuel Martin (2017). One economist argued that Piketty's book was "Nobel-Prize worthy" and noted that it had changed the global discussion on how economic historians study inequality.[20] It has also sparked new conversations in the disciplines of public policy.[21]

In addition to the mainstream in economic history, there is a parallel development in the field influenced by Karl Marx and Marxian economics.[22][23] Marx used historical analysis to interpret the role of class and class as a central issue in history. He debated with the "classical" economists (a term he coined), including Adam Smith and David Ricardo. In turn, Marx's legacy in economic history has been to critique the findings of neoclassical economists.[24] Marxist analysis also confronts economic determinism, the theory that economic relationships are the foundation of political and societal institutions. Marx abstracted the idea of a "capitalist mode of production" as a way of identifying the transition from feudalism to capitalism.[25] This has influenced some scholars, such as Maurice Dobb, to argue that feudalism declined because of peasants' struggles for freedom and the growing inefficiency of feudalism as a system of production.[26] In turn, in what was later coined the Brenner debate, Paul Sweezy, a Marxian economist, challenged Dobs definition of feudalism and its focus only on western Europe.[27] 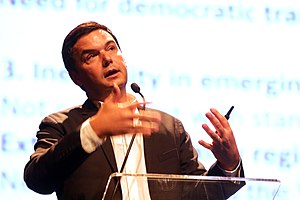 Thomas Piketty, economist and author of Capital in the Twenty-First Century

A new field calling itself the "history of capitalism" has emerged in US history departments since about the year 2000. It includes many topics traditionally associated with the field of economic history, such as insurance, banking and regulation, the political dimension of business, and the impact of capitalism on the middle classes, the poor and women and minorities. The field has particularly focused on the contribution of slavery to the rise of the US economy in the nineteenth century. The field utilizes the existing research of business history, but has sought to make it more relevant to the concerns of history departments in the United States, including by having limited or no discussion of individual business enterprises.[28][29]

Scholars have critiqued the history of capitalism because it does not focus on systems of production, circulation, and distribution.[30] Some have criticized its lack of social scientific methods and its ideological biases.[31] As a result, a new academic journal, Capitalism: A Journal of History and Economics, was founded at the University of Pennsylvania under the direction of Marc Flandreau (University of Pennsylvania), Julia Ott (The New School, New York) and Francesca Trivellato (Institute for Advanced Study, Princeton) to widen the scope of the field. The journal's goal is to bring together "historians and social scientists interested in the material and intellectual aspects of modern economic life."[32] Historians of capitalism have countered these critiques, citing the issues with economic history. As University of Chicago professor of history Jonathan Levy states, "modern economic history began with industrialization and urbanization, and, even then, environmental considerations were subsidiary, if not nonexistent."[33]

The first journal specializing in the field of economic history was The Economic History Review, founded in 1927, as the main publication of the Economic History Society. The first journal featured a publication by Professor Sir William Ashley, the first Professor of Economic History in the English-speaking world, who described the emerging field of economic history. The discipline existed alongside long-standing fields such as political history, religious history, and military history as one that focused on humans' interactions with 'visible happenings'. He continued, '[economic history] primarily and unless expressly extended, the history of actual human practice with respect to the material basis of life. The visible happenings with regard-to use the old formula-to "the production, distribution, and consumption of wealth" form our wide enough field'.[34]

Later, the Economic History Association established another academic journal, The Journal of Economic History, in 1941 as a way of expanding the discipline in the United States.[35] The first president of the Economic History Association, Edwin F. Gay, described the aim of economic history was to provide new perspectives in the economics and history disciplines: 'An adequate equipment with two skills, that of the historian and the economist, is not easily acquired, but experience shows that it is both necessary and possible'.[36] Other related academic journals have broadened the lens with which economic history is studied. These interdisciplinary journals include the Business History Review, European Review of Economic History, Enterprise and Society, and Financial History Review.

Have a very healthy respect for the study of economic history, because that's the raw material out of which any of your conjectures or testings will come. – Paul Samuelson (2009)[38] 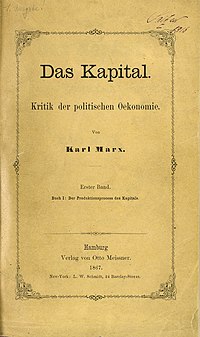 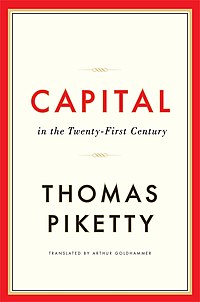 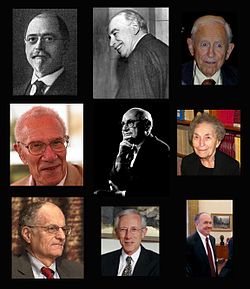 Retrieved from "http://en.turkcewiki.org/w/index.php?title=Economic_history&oldid=991213580"
This website is a mirror of Wikipedia, and is not affiliated with the Wikimedia Foundation.
Categories:
Hidden categories: