Econometrics is the application of statistical methods to economic data in order to give empirical content to economic relationships.[1] More precisely, it is "the quantitative analysis of actual economic phenomena based on the concurrent development of theory and observation, related by appropriate methods of inference".[2] An introductory economics textbook describes econometrics as allowing economists "to sift through mountains of data to extract simple relationships".[3] The first known use of the term "econometrics" (in cognate form) was by Polish economist Paweł Ciompa in 1910.[4] Jan Tinbergen is considered by many to be one of the founding fathers of econometrics.[5][6][7] Ragnar Frisch is credited with coining the term in the sense in which it is used today.[8] 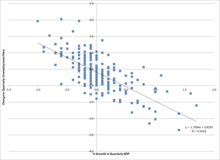 Okun's law representing the relationship between GDP growth and the unemployment rate. The fitted line is found using regression analysis.

) is a function of an intercept (

), a given value of GDP growth multiplied by a slope coefficient

and an error term,

can be estimated. Here

is estimated to be 0.83. This means that if GDP growth increased by one percentage point, the unemployment rate would be predicted to drop by 1.77 points. The model could then be tested for statistical significance as to whether an increase in growth is associated with a decrease in the unemployment, as hypothesized. If the estimate of

Econometric theory uses statistical theory and mathematical statistics to evaluate and develop econometric methods.[10][11] Econometricians try to find estimators that have desirable statistical properties including unbiasedness, efficiency, and consistency. An estimator is unbiased if its expected value is the true value of the parameter; it is consistent if it converges to the true value as the sample size gets larger, and it is efficient if the estimator has lower standard error than other unbiased estimators for a given sample size. Ordinary least squares (OLS) is often used for estimation since it provides the BLUE or "best linear unbiased estimator" (where "best" means most efficient, unbiased estimator) given the Gauss-Markov assumptions. When these assumptions are violated or other statistical properties are desired, other estimation techniques such as maximum likelihood estimation, generalized method of moments, or generalized least squares are used. Estimators that incorporate prior beliefs are advocated by those who favour Bayesian statistics over traditional, classical or "frequentist" approaches.

Econometrics may use standard statistical models to study economic questions, but most often they are with observational data, rather than in controlled experiments.[13] In this, the design of observational studies in econometrics is similar to the design of studies in other observational disciplines, such as astronomy, epidemiology, sociology and political science. Analysis of data from an observational study is guided by the study protocol, although exploratory data analysis may be useful for generating new hypotheses.[14] Economics often analyses systems of equations and inequalities, such as supply and demand hypothesized to be in equilibrium. Consequently, the field of econometrics has developed methods for identification and estimation of simultaneous-equation models. These methods are analogous to methods used in other areas of science, such as the field of system identification in systems analysis and control theory. Such methods may allow researchers to estimate models and investigate their empirical consequences, without directly manipulating the system.

One of the fundamental statistical methods used by econometricians is regression analysis.[15] Regression methods are important in econometrics because economists typically cannot use controlled experiments. Econometricians often seek illuminating natural experiments in the absence of evidence from controlled experiments. Observational data may be subject to omitted-variable bias and a list of other problems that must be addressed using causal analysis of simultaneous-equation models.[16]

In addition to natural experiments, quasi-experimental methods have been used increasingly commonly by econometricians since the 1980s, in order to credibly identify causal effects.[17]

A simple example of a relationship in econometrics from the field of labour economics is:

This example assumes that the natural logarithm of a person's wage is a linear function of the number of years of education that person has acquired. The parameter

measures the increase in the natural log of the wage attributable to one more year of education. The term

is a random variable representing all other factors that may have direct influence on wage. The econometric goal is to estimate the parameters,

under specific assumptions about the random variable

is uncorrelated with years of education, then the equation can be estimated with ordinary least squares.

The most obvious way to control for birthplace is to include a measure of the effect of birthplace in the equation above. Exclusion of birthplace, together with the assumption that

is uncorrelated with education produces a misspecified model. Another technique is to include in the equation additional set of measured covariates which are not instrumental variables, yet render

identifiable.[18] An overview of econometric methods used to study this problem were provided by Card (1999).[19]

Like other forms of statistical analysis, badly specified econometric models may show a spurious relationship where two variables are correlated but causally unrelated. In a study of the use of econometrics in major economics journals, McCloskey concluded that some economists report p-values (following the Fisherian tradition of tests of significance of point null-hypotheses) and neglect concerns of type II errors; some economists fail to report estimates of the size of effects (apart from statistical significance) and to discuss their economic importance. She also argues that some economists also fail to use economic reasoning for model selection, especially for deciding which variables to include in a regression.[21][22]

In some cases, economic variables cannot be experimentally manipulated as treatments randomly assigned to subjects.[23] In such cases, economists rely on observational studies, often using data sets with many strongly associated covariates, resulting in enormous numbers of models with similar explanatory ability but different covariates and regression estimates. Regarding the plurality of models compatible with observational data-sets, Edward Leamer urged that "professionals ... properly withhold belief until an inference can be shown to be adequately insensitive to the choice of assumptions".[23]

Retrieved from "http://en.turkcewiki.org/w/index.php?title=Econometrics&oldid=951486316"
This website is a mirror of Wikipedia, and is not affiliated with the Wikimedia Foundation.
Categories:
Hidden categories: