Easton is a city in and the county seat of Northampton County, Pennsylvania, United States.[2] The city's population was 26,800 as of the 2010 census.[3] Easton is located at the confluence of the Delaware River and the Lehigh River, roughly 55 miles (89 km) north of Philadelphia and 70 miles (110 km) west of New York City.

The city is split up into four sections: Historic Downtown, which lies directly to the north of the Lehigh River, to the west of the Delaware River, continuing west to Sixth Street; The West Ward, which lies between Sixth and Fifteenth Streets; The South Side, which lies south of the Lehigh River; and College Hill, a neighborhood on the hills to the north of downtown, which is the home of Lafayette College, a liberal arts and engineering institution. The boroughs of Wilson, West Easton, and Glendon are also directly adjacent to the city; the first and largest of which, Wilson, partially aligns in the same North-South Grid as the city of Easton.

Centre Square, the town square of the city's Downtown neighborhood, is home to the Soldiers' & Sailors' Monument, a memorial for Easton area veterans killed during the American Civil War. The Peace Candle, a candle-like structure, is assembled and disassembled every year atop the Civil War monument for the Christmas season.[4]

The Norfolk Southern Railway's Lehigh Line (formerly the main line of the Lehigh Valley Railroad), runs through Easton on its way to Bethlehem and Allentown heading west and to Phillipsburg, New Jersey just across the Delaware River.

The Lenape Native Americans originally referred to the area as "Lechauwitank", or "The Place at the Forks". The site of the future city was part of the land obtained from the Delawares by the Walking Purchase.[5][citation needed] Thomas Penn set aside a 1,000 acres (4.0 km2) tract of land at the confluence of the Lehigh and Delaware rivers for a town. Easton was settled by Europeans in 1739 and founded in 1752,[6] and was so named at the request of Penn; he had recently married Juliana Fermor, the daughter of Lord Pomfret whose estate was called Easton Neston, near Towcester, Northamptonshire, England.[7] As Northampton County was being formed at this time, Easton was selected as its county seat.

During the French and Indian War, the Treaty of Easton was signed here by the British colonial government of the Province of Pennsylvania and the Native American tribes in the Ohio Country, including the Shawnee and Lenape.

Easton was an important military center during the American Revolutionary War.[citation needed] During the Revolutionary War, Easton had a military hospital.[8] On 18 June 1779, General John Sullivan led 2,500 Continentals from Easton to engage British Indian allies on the frontier.[9] Easton was one of the first three places the Declaration of Independence was publicly read (along with Philadelphia and Trenton). It is claimed that the Easton flag was flown during that reading,[10] making it one of the first "Stars and Stripes" to fly over the colonies.[11] This flag was used by a militia company during the War of 1812, and currently serves as Easton's municipal flag.

Sited at the confluence of the rapidly flowing Lehigh River's waters with the more stately waters of the deeper wider Delaware, Easton became a major commercial center during the canal and railroad periods of the 19th century, when it would become a transportation hub for the eastern steel industry. The Delaware Canal, was quickly built soon after the lower Lehigh Canal (1818) became effective in regularly and reliably delivering much needed anthracite coal, into more settled lands along the rivers. And eventually the Morris would also serve to connect the rapidly developing Coal Regions to the north and west, to the fuel starved iron works to the west, the commercial port of Philadelphia to the south, and to the many home owners seeking fuel for heat within Pennsylvania, Maryland, New Jersey, Delaware and New York. Seeing other ways of exploiting the new fuel source, other entrepreneurs quickly moved to connect across the Delaware River reaching into the New York City area to the east via a connection with the Morris Canal in Phillipsburg, New Jersey, so the town became a canal nexus or hub from which the Coal from Mauch Chunk reached the world. The early railroads were often built to parallel and speed shipping along transportation corridors, and by the late 1860s the Lehigh and Susquehanna Railroad (LH&S) and Lehigh Valley Railroad (LVRR) were built to augment the bulk traffic through the canals and provide lucrative passenger travel services. The LVRR, known as 'the Black Diamond Line' would boast the twice daily "Black Diamond Express" daily passenger trains to and from New York City and Buffalo, New York via Easton. The Central Railroad of New Jersey (CNJ), would lease and operate the LH&S tracks from the 1870s until the Conrail consolidations absorbed both the Central Railroad of New Jersey and Lehigh Valley Railroad in 1966. Today, the Lehigh Valley Railroad's main line is the only major rail line that goes through Easton and is now known as the Lehigh Line; the Lehigh Line was bought by the Norfolk Southern Railway in 1999.

Canal transportation was largely replaced by railroads in the mid-19th century with Easton being a hub for five railroads including the Jersey Central, Lehigh Valley Railroad and others. Easton lost its prominence in passenger transportation with the rise of the automobile in the mid-20th century.[citation needed] The development of improved logistics, transfer and handling methods lead to other regions profiting from freight transportation rather than Easton.

Like the Pennsylvania Dutch region to the southwest, Easton has a strong German heritage. The Pennsylvania Argus, a German-language newspaper, was published in Easton until 1917.[citation needed] As part of their heritage, the Germans put up one of the continent's earliest Christmas trees in Easton; Daniel Foley's book states that "Another diary reference unearthed recently makes mention of a tree set-up at Easton, Pennsylvania, in 1816."[12] There is a plaque in Scott Park (along the Delaware River) commemorating this event.

Easton operates a mayor-in-council city government. Residents elect a city controller, six city councilpersons and a mayor who is also a voting member of the city council. All of these officials are elected to four-year terms.[14][15]

The incumbent mayor, Democrat Sal Panto, Jr., was re-elected to his third consecutive term in 2015; he had previously served two terms as mayor during the 1980s.[16][17]

Easton is part of Pennsylvania's 7th congressional district, represented in the United States House of Representatives by Democrat Susan Wild, first elected to this office in 2018. 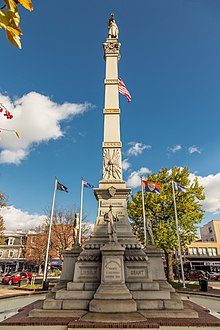 Downtown Easton lies at the confluence of the Lehigh River and Delaware River and is a low-lying area surrounded by hills to the north, west, and south. North of downtown is College Hill, the home of Lafayette College. South Easton, divided by the Lehigh River from the rest of the city, was a separate borough until 1898; it was settled initially by Native Americans, later by canal workers, and then was later the home of several silk mills.[citation needed]

Easton experiences a humid continental climate (Köppen climate classification Dfa). Summers are usually hot and very muggy, averaging in the mid-80s during the day, though the high humidity makes it feel much warmer. Fall and spring months are typically mild, offering many days in the mid-60s, as well as stronger winds. Winters are usually very cold and produce about 30 inches of snow. The local hardiness zone is 6b. 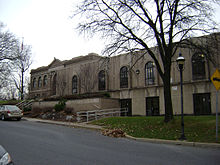 Easton Area High School is known[25] for its long-standing athletic rivalry with Phillipsburg High School in neighboring Phillipsburg, New Jersey. The two teams play an annual football game on Thanksgiving Day that is considered one of the largest and longest-standing rivalries in American high school football. 2006 marked the 100th anniversary of the Easton-Phillipsburg high school football rivalry[25] The game, which was shown on ESPN, was won by Easton. In 2009, Easton was the location of the Gatorade REPLAY Game in which the 1993 teams from the Easton vs. P-Burg Game met again to resolve the game, which ended in a 7–7 tie. The REPLAY Game was won by Phillipsburg, 27–12.[26]

Easton Area High School athletes compete in the East Penn Conference, which consists of the 12 largest high schools in the Lehigh Valley. Easton holds the third most LVIAC championships in all sports, behind only Parkland High School and Emmaus High School.[27] 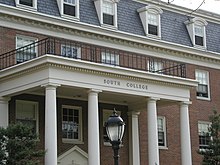 Easton is the home of one four-year college, Lafayette College, which was established in 1826. Lafayette is located in the College Hill section of Easton and is home to 2,500 undergraduate students.[28] In 2017 the U.S. News & World Report ranked Lafayette as the 36th best liberal arts school in the country.[28]

Before the American Civil War, Easton was the location of Union Law School, which was founded in 1846 and seems to have foundered fairly soon after the 1856 death of its founder, Judge Washington McCartney. (While at least one student, future Wisconsin state senator Robert L. D. Potter, graduated in the spring of 1857, a historian in 2000 dismissed Union in an endnote as "a one-man operation that died with him" [i.e., McCartney].[29]) 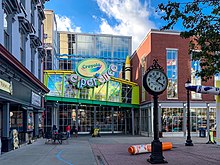 Easton's Two Rivers Landing is the home of two interactive children's museums, the National Canal Museum, which focuses on the importance of canals in the region, and the Crayola Experience, which is owned by Crayola LLC (formerly known as Binney & Smith), a major toy manufacturer based in nearby Forks Township. The global headquarters for Victaulic is also based in nearby Forks Township. The city was also once the home of Dixie Cup Corporation, the manufacturer of Dixie Cups and other consumer products. Majestic Athletic, current provider of uniforms for Major League Baseball, is based in nearby Palmer Township.

The Lehigh Valley Railroad, Central Railroad of New Jersey using the Lehigh and Susquehanna Railroad, Lehigh and Hudson River Railway and Conrail are major defunct railroads that operated in Easton. The Norfolk Southern Railway is now the only railroad in Easton.

Easton's daily newspaper is The Express-Times. The Morning Call, based in Allentown, also is widely read in the city. Easton is part of the Philadelphia DMA, but also receives numerous radio and television channels from New York City, as well as the smaller Scranton-Wilkes-Barre media market to the northwest.

Two television stations are based in the Easton area: PBS affiliate WLVT Channel 39 in Bethlehem, and independent station WFMZ Channel 69 in Allentown.

Two national magazines, Runner's World and Bicycling, are based in Easton.[30]

Easton is becoming an increasingly sought after destination for motion pictures filming on location.

Easton was once served only by the 215 area code from 1947 (when the North American Numbering Plan of the Bell System went into effect) until 1994. In response to southeastern Pennsylvania's growing telecommunication demand, Easton telephones exchanges were switched to area code 610 in 1994. An overlay area code, 484, was added to the 610 service area in 1999.[31] 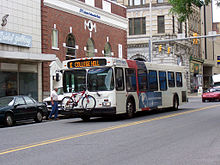 Air transport to and from Easton is available through Lehigh Valley International Airport, which is located approximately 15 miles (24 km) west of the city, in Hanover Township.

Easton has no passenger rail service. Until 1983 NJ Transit's Raritan Valley Line terminated at Phillipsburg, on the other side of the Delaware River from Easton. The line now stops at High Bridge, New Jersey, roughly 20 miles (32 km) to the east. Under NJT's I-78 Corridor study this service would be restored.

The former Lehigh Valley Railroad main line, the Lehigh Line, travels through Easton and is owned by the Norfolk Southern Railway.

Main article: List of people from the Lehigh Valley

Retrieved from "http://en.turkcewiki.org/w/index.php?title=Easton,_Pennsylvania&oldid=949113108"
This website is a mirror of Wikipedia, and is not affiliated with the Wikimedia Foundation.
Categories:
Hidden categories: