The Early Cyrillic alphabet is a writing system that was developed in the First Bulgarian Empire during the late 9th century[2][3][4] on the basis of the Greek alphabet[5][6][7] for the Slavic peoples living near the Byzantine Empire in South East and Central Europe.[8] The objective was to make it possible to have Christian service in Slavic tongue, instead of in Greek, which locals did not understand, and to bring Bulgarian subjects closer to the cultural influence of Christianity, the official religion of the Byzantine Empire. It was used by Slavic peoples in South East, Central and Eastern Europe.[8]

It was developed in the Preslav Literary School in the capital city of the First Bulgarian Empire in order to write the Old Church Slavonic language (called also Old Bulgarian).[9][10] The modern Cyrillic script is still used primarily for some Slavic languages (such as Bulgarian, Serbian, Russian and Ukrainian), and for East European and Asian languages that have experienced a great amount of Russian cultural influence.

Among some of the traditionally culturally influential countries using Cyrillic script are Bulgaria, Russia, Serbia and Ukraine. 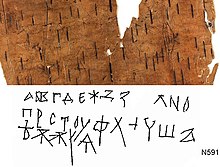 A more complete early Cyrillic abecedary (on the top half of the left side), this one written by the boy Onfim between 1240 and 1260 AD (birch bark document № 199).

The earliest form of manuscript Cyrillic, known as ustav, was based on Greek uncial script, augmented by ligatures and by letters from the Glagolitic alphabet for consonants not found in Greek.[11]

The Glagolitic alphabet was created by the monk Saint Cyril, possibly with the aid of his brother Saint Methodius, around 863.[11] It was an adaptation designed to link the language of their mother, who was of Slavic origin (славянка),[citation needed] and their father, who was the Roman military commander of Thessaloniki, the second most important city of the Byzantine Empire.[citation needed] Cyrillic, on the other hand, was a creation of Cyril's students (most notable of whom were Saint Clement of Ohrid and Saint Naum of Preslav) in the 890s at the Preslav Literary School under Bulgarian Tsar Simeon the Great as a more suitable script for church books, though retaining the original Bulgarian symbols in Glagolitic.[12] An alternative hypothesis proposes that it emerged in the border regions of Greek proselytization to the Slavs before it was codified and adapted by some systematizer among the Slavs; the oldest Cyrillic manuscripts look very similar to 9th and 10th century Greek uncial manuscripts,[11] and the majority of uncial Cyrillic letters were identical to their Greek uncial counterparts.[13] One possibility is that this systematization of Cyrillic was undertaken at the Council of Preslav in 893, when the Old Church Slavonic liturgy was adopted by the Bulgarian Empire.[13]

The Cyrillic alphabet was very well suited for the writing of Old Church Slavic, generally following a principle of "one letter for one significant sound", with some arbitrary or phonotactically-based exceptions.[11] Particularly, this principle is violated by certain vowel letters, which represent [j] plus the vowel if they are not preceded by a consonant.[11] It is also violated by a significant failure to distinguish between /ji/ and /jĭ/ orthographically.[11] There was no distinction of capital and lowercase letters, though manuscript letters were rendered larger for emphasis, or in various decorative initial and nameplate forms.[12] Letters served as numerals as well as phonetic signs; the values of the numerals were directly borrowed from their Greek-letter analogues.[11] Letters without Greek equivalents mostly had no numeral values, whereas one letter, koppa, had only a numeric value with no phonetic value.[11]

Since its creation, the Cyrillic script has adapted to changes in spoken language and developed regional variations to suit the features of national languages. It has been the subject of academic reforms and political decrees. Variations of the Cyrillic script are used to write languages throughout Eastern Europe and Asia.

The form of the Russian alphabet underwent a change when Tsar Peter the Great introduced the Civil Script (Russian: гражданский шрифт, romanized: graždanskiy šrift, or гражданка, graždanka), in contrast to the prevailing Church Typeface, (Russian: церковнославя́нский шрифт, romanized: cerkovnoslavjanskiy šrift) in 1708. Some letters and breathing marks which were only used for historical reasons were dropped. Medieval letterforms used in typesetting were harmonized with Latin typesetting practices, exchanging medieval forms for Baroque ones, and skipping the western European Renaissance developments. The reform subsequently influenced Cyrillic orthographies for most other languages. Today, the early orthography and typesetting standards only remain in use in Church Slavonic.

A comprehensive repertoire of early Cyrillic characters is included in the Unicode since version 5.1 standard, which published on April 4, 2008. These characters and their distinctive letterforms are represented in specialized computer fonts for Slavistics.

In addition to the basic letters, there were a number of scribal variations, combining ligatures, and regionalisms used, all of which varied over time.

Each letter had a numeric value also, inherited from the corresponding Greek letter. A titlo over a sequence of letters indicated their use as a number; usually this was accompanied by a dot on either side of the letter.[11] In numerals, the ones place was to the left of the tens place, the reverse of the order used in modern Arabic numerals.[11] Thousands are formed using a special symbol, ҂ (U+0482), which was attached to the lower left corner of the numeral.[11] Many fonts display this symbol incorrectly as being in line with the letters instead of subscripted below and to the left of them.

Titlos were also used to form abbreviations, especially of nomina sacra; this was done by writing the first and last letter of the abbreviated word along with the word's grammatical endings, then placing a titlo above it.[11] Later manuscripts made increasing use of a different style of abbreviation, in which some of the left-out letters were superscripted above the abbreviation and covered with a pokrytie diacritic.[11]

Several diacritics, adopted from Polytonic Greek orthography, were also used, but were seemingly redundant[11] (these may not appear correctly in all web browsers; they are supposed to be directly above the letter, not off to its upper right):

Punctuation systems in early Cyrillic manuscripts were primitive: there was no space between words and no upper and lower case, and punctuation marks were used inconsistently in all manuscripts.[11]

Some of these marks are also used in Glagolitic script.

Used only in modern texts

Retrieved from "http://en.turkcewiki.org/w/index.php?title=Early_Cyrillic_alphabet&oldid=945567189"
This website is a mirror of Wikipedia, and is not affiliated with the Wikimedia Foundation.
Categories:
Hidden categories: