Jump to navigation Jump to search
Letter of the Latin alphabet
This article is about the letter. For the mathematical constant, see e (mathematical constant). For other uses, see E (disambiguation).
For technical reasons, "E#" redirects here. For E sharp, see E♯.

E or e is the fifth letter and the second vowel letter in the modern English alphabet and the ISO basic Latin alphabet. Its name in English is e (pronounced /ˈiː/), plural ees.[1] It is the most commonly used letter in many languages, including Czech, Danish, Dutch, English, French, German, Hungarian, Latin, Latvian, Norwegian, Spanish, and Swedish.[2][3][4][5][6]

The Latin letter 'E' differs little from its source, the Greek letter epsilon, 'Ε'. This in turn comes from the Semitic letter hê, which has been suggested to have started as a praying or calling human figure (hillul 'jubilation'), and was most likely based on a similar Egyptian hieroglyph that indicated a different pronunciation. In Semitic, the letter represented /h/ (and /e/ in foreign words); in Greek, hê became the letter epsilon, used to represent /e/. The various forms of the Old Italic script and the Latin alphabet followed this usage. 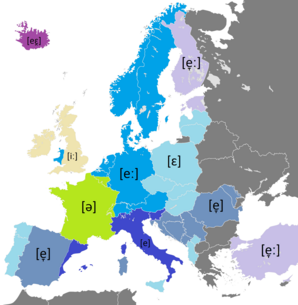 Pronunciation of the name of the letter ⟨e⟩ in European languages

Although Middle English spelling used ⟨e⟩ to represent long and short /e/, the Great Vowel Shift changed long /eː/ (as in 'me' or 'bee') to /iː/ while short /ɛ/ (as in 'met' or 'bed') remained a mid vowel. In other cases, the letter is silent, generally at the end of words.

In the orthography of many languages it represents either [e], [e̞], [ɛ], or some variation (such as a nasalized version) of these sounds, often with diacritics (as: ⟨e ê é è ë ē ĕ ě ẽ ė ẹ ę ẻ⟩) to indicate contrasts. Less commonly, as in French, German, or Saanich, ⟨e⟩ represents a mid-central vowel /ə/. Digraphs with ⟨e⟩ are common to indicate either diphthongs or monophthongs, such as ⟨ea⟩ or ⟨ee⟩ for /iː/ or /eɪ/ in English, ⟨ei⟩ for /aɪ/ in German, and ⟨eu⟩ for /ø/ in French or /ɔɪ/ in German.

'E' is the most common (or highest-frequency) letter in the English language alphabet (starting off the typographer's phrase ETAOIN SHRDLU) and several other European languages, which has implications in both cryptography and data compression. In the story "The Gold-Bug" by Edgar Allan Poe, a character figures out a random character code by remembering that the most used letter in English is E. This makes it a hard and popular letter to use when writing lipograms. Ernest Vincent Wright's Gadsby (1939) is considered a "dreadful" novel, and supposedly "at least part of Wright's narrative issues were caused by language limitations imposed by the lack of E."[7] Both Georges Perec's novel A Void (La Disparition) (1969) and its English translation by Gilbert Adair omit 'e' and are considered better works.[8]

Descendants and related characters in the Latin alphabet[edit]

Ancestors and siblings in other alphabets[edit]

In British Sign Language (BSL), the letter 'e' is signed by extending the index finger of the right hand touching the tip of index on the left hand, with all fingers of left hand open.

Retrieved from "http://en.turkcewiki.org/w/index.php?title=E&oldid=990507437"
This website is a mirror of Wikipedia, and is not affiliated with the Wikimedia Foundation.
Categories:
Hidden categories: