Jump to navigation Jump to search
This article is about the economic phenomenon. For the disease affecting elm trees, see Dutch elm disease.
The apparent causal relationship between the increase in the economic development of a specific sector and a decline in other sectors

In economics, the Dutch disease is the apparent causal relationship between the increase in the economic development of a specific sector (for example natural resources) and a decline in other sectors (like the manufacturing sector or agriculture). The putative mechanism is that as revenues increase in the growing sector (or inflows of foreign aid), the given nation's currency becomes stronger (appreciates) compared to currencies of other nations (manifest in an exchange rate). This results in the nation's other exports becoming more expensive for other countries to buy, and imports becoming cheaper, making those sectors less competitive. While it most often refers to natural resource discovery, it can also refer to "any development that results in a large inflow of foreign currency, including a sharp surge in natural resource prices, foreign assistance, and foreign direct investment".[1]

The term was coined in 1977 by The Economist to describe the decline of the manufacturing sector in the Netherlands after the discovery of the large Groningen natural gas field in 1959.[2] 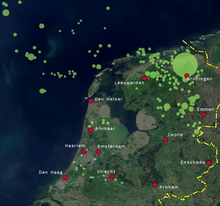 The classic economic model describing Dutch disease was developed by the economists W. Max Corden and J. Peter Neary in 1982. In the model, there is a non-tradable sector (which includes services) and two tradable sectors: the booming sector, and the lagging (or non-booming) tradable sector. The booming sector is usually the extraction of natural resources such as oil, natural gas, gold, copper, diamonds or bauxite, or the production of crops, such as coffee or cocoa. The lagging sector is usually manufacturing or agriculture.

A resource boom affects this economy in two ways:

In a model of international trade based on resource endowments as the Heckscher–Ohlin/Heckscher–Ohlin-Vanek, the Dutch disease can be explained by the Rybczynski Theorem.

Using data on 118 countries over the period 1970–2007, a study by economists at the University of Cambridge provides evidence that the Dutch disease does not operate in primary commodity-abundant countries.[why?][5] They also show that it is the volatility in commodity prices, rather than abundance per se, that drives the resource curse paradox since the negative impact of commodity terms of trade volatility on GDP per capita is larger than the growth enhancing effects of commodity booms. A study of the resource-rich Australian and Norwegian economies has shown that a booming resource sector can have positive effects (or 'spillovers') on non-resource sectors, which have not been captured in previous analysis. Construction and services, and to a lesser extent manufacturing benefit from these spillovers.[6][7]

However, other theories suggest that this is detrimental, for example when the natural resources deplete. Also, prices may decrease and competitive manufacturing cannot return as quickly as it left. This may happen because technological growth is smaller in the booming sector and the non-tradable sector than the non-booming tradable sector.[8] Because that economy had smaller technological growth than did other countries, its comparative advantage in non-booming tradable goods will have shrunk, thus leading firms not to invest in the tradables sector.[9]

Also, volatility in the price of natural resources, and thus the real exchange rate, limits investment by private firms, because firms will not invest if they are not sure what the future economic conditions will be.[10] Commodity exports such as raw materials, drive up the value of the currency. This is what leads to the lack of competition in the other sectors of the economy. The extraction of natural resources is also extremely capital intensive, resulting in few new jobs being created.[11]

There are two basic ways to reduce the threat of Dutch disease: slowing the appreciation of the real exchange rate, and boosting the competitiveness of the adversely affected sectors. One approach is to sterilize the boom revenues, that is, not to bring all the revenues into the country all at once, and to save some of the revenues abroad in special funds and bring them in slowly. In developing countries, this can be politically difficult as there is often pressure to spend the boom revenues immediately to alleviate poverty, but this ignores broader macroeconomic implications.

Sterilization will reduce the spending effect, alleviating some of the effects of inflation. Another benefit of letting the revenues into the country slowly is that it can give a country a stable revenue stream, giving more certainty to revenues from year to year. Also, by saving the boom revenues, a country is saving some of the revenues for future generations. Examples of these sovereign wealth funds include the Australian Government Future Fund, Iranian national development fund, the Government Pension Fund in Norway, the Stabilization Fund of the Russian Federation, the State Oil Fund of Azerbaijan, Alberta Heritage Savings Trust Fund of Alberta, Canada, and the Future Generations Fund of the State of Kuwait established in 1976. Recent[when?] talks led by the United Nations Development Programme in Cambodia – International Oil and Gas Conference on fueling poverty reduction – point out the need for better education of state officials and energy CaDREs (Capacity Needs Diagnostics for Renewable Energies) linked to a sovereign wealth fund to avoid the resource curse (Paradox of plenty).[12]

Another strategy for avoiding real exchange rate appreciation is to increase saving in the economy in order to reduce large capital inflows which may appreciate the real exchange rate. This can be done if the country runs a budget surplus. A country can encourage individuals and firms to save more by reducing income and profit taxes. By increasing saving, a country can reduce the need for loans to finance government deficits and foreign direct investment.

Investments in education and infrastructure can increase the competitiveness of the lagging manufacturing or agriculture sector. Another approach is government protectionism of the lagging sector, that is, increase in subsidies or tariffs. However, this could worsen the effects of Dutch disease, as large inflows of foreign capital are usually provided by the export sector and bought up by the import sector. Imposing tariffs on imported goods will artificially reduce that sector's demand for foreign currency, leading to further appreciation of the real exchange rate.[13]

It is usually difficult to be certain that a country has Dutch disease because it is difficult to prove the relationship between an increase in natural resource revenues, the real-exchange rate, and a decline in the lagging sector. An appreciation in the real exchange rate could be caused by other things such as productivity increases in the Balassa-Samuelson effect, changes in the terms of trade and large capital inflows.[14] Often these capital inflows are caused by foreign direct investment or to finance a country's debt. However, evidence does exist suggesting that unexpected and very large oil and gas discoveries do cause the appreciation of the real exchange rate and the decline of the lagging sector across affected countries on average.[15]

Retrieved from "http://en.turkcewiki.org/w/index.php?title=Dutch_disease&oldid=979111445"
This website is a mirror of Wikipedia, and is not affiliated with the Wikimedia Foundation.
Categories:
Hidden categories: