Jump to navigation Jump to search
Type of auction which begins with a high asking price, and lowers it. 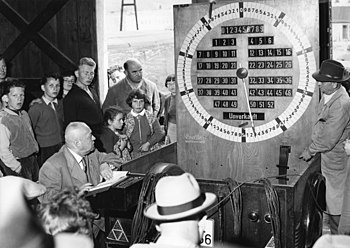 A 1957 Dutch auction in Germany to sell fruit.

A Dutch auction is one of several similar types of auctions for buying or selling goods.[1][2][3] Most commonly, it means an auction in which the auctioneer begins with a high asking price in the case of selling, and lowers it until some participant accepts the price, or it reaches a predetermined reserve price. This has also been called a clock auction or open-outcry descending-price auction.[4] This type of auction shows the advantage of speed since a sale never requires more than one bid. It is strategically similar to a first-price sealed-bid auction.[5][6]

Herodotus relates an account of a descending price auction in Babylon, suggesting that market mechanisms similar to Dutch auctions were used in ancient times.[7] Descending-price auctions were used in 17th century Holland for estate sales and paintings.[8]. The Dutch manner of auctioning appeared in England by the 17th century, which was called "mineing". In that type of auction, said to be a "Method of Sale not hitherto used in England", the auctioneer began with a high price that was sequentially reduced until one bidder cried out "Mine!" [9] The Times mentioned one Dutch auction in 1788.[10]

A Dutch auction initially offers an item at a price in excess of the amount the seller expects to receive. The price lowers in steps until a bidder accepts the current price. That bidder wins the auction and pays that price for the item. For example, a business might auction a used company car at a starting bid of $15,000. If nobody accepts the initial bid, the sellers successively reduce the price in $1,000 increments. When the price reaches $10,000, a particular bidder—who feels that price is acceptable and that someone else will agree, or might bid first if the price goes to $9,000—quickly accepts the bid, and pays $10,000 for the car.

Dutch auctions are a competitive alternative to a traditional auction, in which customers make bids of increasing value until nobody is willing to bid higher.[11]

The United States Department of the Treasury, through the Federal Reserve Bank of New York (FRBNY), raises funds for the U.S. Government using a Dutch auction. The FRBNY interacts with primary dealers, including large banks and broker-dealers who submit bids on behalf of themselves and their clients using the Trading Room Automated Processing System (TRAPS), and are generally told of winning bids within fifteen minutes.

For example, suppose the sponsor of the issuance seeks to raise $10 billion in ten-year notes with a 5.125% coupon and in aggregate the bids are as follows:

In this example the % at high is 66.66%, meaning only $3 billion of the $4.5 billion at 5.130% get bonds. Bids are filled from the lowest yield (highest price) until the process raises the entire $10 billion. This auction clears at a yield of 5.130%, and all bidders pay the same amount. In theory, this feature of the Dutch auction leads to more aggressive bidding, as those who (in this example) bid 5.115% receive the bonds at the higher yield (lower price) of 5.130%.

A variation on the Dutch auction, OpenIPO, was developed by WR Hambrecht and has been used for 19 IPOs in the US. Auctions have been used for hundreds of IPOs in more than two dozen countries, but have not been popular with issuers and thus were replaced by other methods. One of the largest uniform price or "Dutch" auction IPOs was for Singapore Telecom in 1994. The 1994 auction IPO of Japan Tobacco was substantially larger (with proceeds more than double those of Singapore Telecom and triple those of Google), but this auction was discriminatory or pay-what-you-bid, not uniform price or "Dutch". SRECTrade.com uses a two-sided Dutch auction to trade Solar Renewable Energy Credits (SRECs).

The introduction of the Dutch auction share repurchase in 1981 gives firms an alternative to the fixed price tender offer when executing a tender offer share repurchase. The first firm to use the Dutch auction was Todd Shipyards. A Dutch auction offer specifies a price range within which the shares are purchased. Shareholders can choose to tender their stock at any price within the stated range. The firm compiles these responses, creating a supply curve for the stock.[12] The purchase price is the lowest price that allows the firm to buy the number of shares sought in the offer, and the firm pays that price to all investors who tendered at or below that price. If the number of shares tendered exceeds the number sought, the company purchases less than all shares tendered at or below the purchase price pro rata to all who tendered at or below the purchase price. If too few shares are tendered, then the firm either cancels the offer (provided it had been made conditional on a minimum acceptance), or it buys back all tendered shares at the maximum price.

Retrieved from "http://en.turkcewiki.org/w/index.php?title=Dutch_auction&oldid=961291228"
This website is a mirror of Wikipedia, and is not affiliated with the Wikimedia Foundation.
Categories:
Hidden categories: