A 1596 Dutch expedition lost half its crew, killed a Javanese prince and lost a ship but returned to the Dutch Republic with a load of spices, the profit from which encouraged other expeditions.

Recognising the potential of the East Indies spice trade, and to prevent competition eating into Dutch profits, the Dutch Government amalgamated the competing merchant companies into the United East India Company (VOC). In 1602, the States General of the Netherlands granted it a 21-year monopoly in the spice trade in Asia. It was awarded quasi-governmental powers, including the ability to wage war, imprison and execute convicts,[1] negotiate treaties, coin money, and establish colonies.[2] 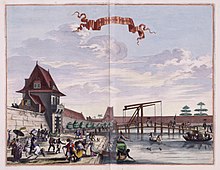 Batavia built in what is now Jakarta, 1682

In 1603, the first permanent Dutch trading post in Indonesia was established in Banten, northwest Java[3] and in 1611, another was established at Jayakarta (later renamed 'Batavia' and then 'Jakarta').

VOC headquarters were in Ambon Island from 1610 to 1619, and although this was located centrally in the spice production areas, it was far from the Asian trade routes and other VOC activity ranging from Africa to Japan.[4] A location in the west of the archipelago was thus sought; while the Straits of Malacca were strategic, the Portuguese conquest had made them dangerous, and the first permanent VOC settlement in Banten was difficult due to control by a powerful local ruler and competition from Chinese and English traders.[4]

In 1604, a second British East India Company voyage to Maluku, and subsequent establishments of trading posts between 1611 and 1617 across the archipelago began Anglo-Dutch competition for access to spices as the Dutch monopolistic ambitions were threatened.[3] Diplomatic agreements and co-operation between the Dutch and the English over the spice trade ended with the Amboyna massacre where ten Englishmen were tortured and killed for conspiracy against the Dutch government, following which the English withdrew from their Indonesian activities (except in Banten).[3]

In 1619, Jan Pieterszoon Coen was appointed Governor-General of the VOC. On 30 May 1619, Coen, backed by a force of nineteen ships, stormed Jayakarta, driving out the Banten forces, and from the ashes, established Batavia as the VOC headquarters.

Coen's plans had included making Batavia the centre of intra-Asian trade spanning from Japan to China, Burma, Indonesian archipelago, and Ceylon as far as Persia, by employing Ambonese mercenary and Chinese labour to develop the spice trade. Although this plan was never realised, Coen managed to establish a Dutch monopoly of the spice trade through an alliance with Ternate Sultanate in 1607 to control the production of cloves, and the occupation of the Banda Islands gave control of the nutmeg trade. The Dutch captured Melaka from the Portuguese in 1641 giving them control of the region's seas.

By the mid-17th century, Batavia had become an important trade centre. It had repelled attacks from the Javanese Mataram kingdom. The Dutch defeated the Sulawesi city of Makassar in 1667 thus bringing its trade under VOC control. Sumatran ports were also brought under VOC control and the last of the Portuguese were expelled in 1660. In return for monopoly control over the pepper trade and the expulsion of the British, the Dutch helped the son of the ruler of Banten overthrow his father in 1680.

VOC policy at this time was to concentrate on its trading posts and to not become involved in costly territorial conquest. However, the company became deeply involved in the internal politics of Java in this period, and fought in a number of wars involving the leaders of Mataram and Banten (Bantam). The VOC reached an accord with the susuhunan (king) of Mataram, Java's dominant kingdom, that only allowed Dutch ships to trade within the archipelago.

Although they failed to gain complete control of the Indonesian spice trade, they had much more success than the previous Portuguese efforts. They exploited the factionalisation of the small kingdoms in Java that had replaced Majapahit, establishing a permanent foothold in Java, from which grew a land-based colonial empire which became one of the world's richest colonial possessions.[5]

The most profound VOC's impact on Indonesian native polities was their technology, especially in weaponry and shipping. With this technology they were able to assert relative superiority upon native kingdoms, especially in the Mollucas and Java. Although firearms and cannons were already brought by previous European colonisers, the Portuguese, it was the Dutch VOC that used them quite extensively in their conquest on the Indonesian archipelago, as well as wrestled some of Portuguese ports and colonies in Asia, such as Malacca, Ceylon and Ambon. VOC involved deeper into the Mataram court's intrigue and exploited the Javanese royalties tendencies to disintegrate, allowing them to gain a firm foothold in Java.

Another VOC tremendous impact was the change of trade systems in the Indonesian archipelago. By enforcing the monopoly policy on spice trade, VOC had to eradicate the previous trading system where large numbers of ports, kingdoms and traders participated. This led to the opposition of Asian trading polities, which made VOC involved in a series of battles and conquests.

VOC personnel lived separate to indigenous Indonesians, and Dutch people ranked low in indigenous status systems. As such, while the VOC introduced objects, techniques, corporate organisation into Indonesian society, its impact on Indonesian thinkers was minimal. Rather, at a time when Europe was denouncing autocratic rule, hierarchy and hereditary rights, the VOC borrowed these values from Indonesian societies. Governors-general acted like royalty and did not leave the enclaves they had established, and like Indonesian royalty, they employed the local nobility and Chinese agents to organise labour.[6]

Retrieved from "http://en.turkcewiki.org/w/index.php?title=Dutch_East_India_Company_in_Nusantara&oldid=941021581"
This website is a mirror of Wikipedia, and is not affiliated with the Wikimedia Foundation.
Categories:
Hidden categories: