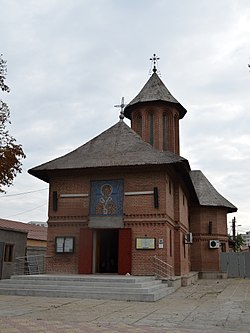 The neolithic Dudeşti culture (5th-4th millennium BC), which encompassed most of the Romanian Plain and Dobruja, gets its name from this region of Bucharest, as this was the first place where its archeological remains were found.

Originally a village, it was included in Bucharest as it expanded. Its name is related to the Wallachian aristocratic family of the Dudești, with an etymology leading back to the Romanian dud, "mulberry tree" and the suffix -eşti. During the first reign of Alexander Mourousis as Prince of Wallachia, in the context of a bubonic plague outbreak, it became the site of a quarantined hospital for the afflicted.

Unlike other nearby areas, most of the neighbourhood escaped Nicolae Ceauşescu's plans of demolition, though parts of it were demolished to make room for some construction projects. A big tram depot and the Bucharest Mall are located nearby.

Retrieved from "http://en.turkcewiki.org/w/index.php?title=Dudești,_Bucharest&oldid=880728929"
This website is a mirror of Wikipedia, and is not affiliated with the Wikimedia Foundation.
Categories:
Hidden categories: