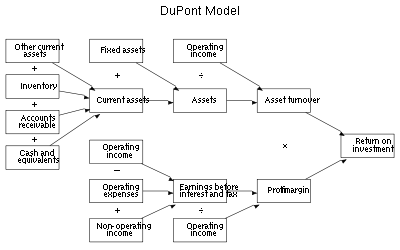 DuPont Analysis (also known as the DuPont identity, DuPont equation, DuPont framework, DuPont Model or the DuPont method) is an expression which breaks ROI (return on investment) into three parts.

The name comes from the DuPont Corporation that started using this formula in the 1920s. DuPont explosives salesman Donaldson Brown invented this formula in an internal efficiency report in 1912.[1]

The DuPont identity breaks down ROI (that is, the returns that investors receive from the firm) into three distinct elements. This analysis enables the analyst to understand the source of superior (or inferior) return by comparison with companies in similar industries (or between industries).

Other industries, such as fashion, may derive a substantial portion of their competitive advantage from selling at a higher margin, rather than higher sales. For high-end fashion brands, increasing sales without sacrificing margin may be critical. The DuPont identity allows analysts to determine which of the elements is dominant in any change of ROE.

Certain types of retail operations, particularly stores, may have very low profit margins on sales, and relatively moderate leverage. In contrast, though, groceries may have very high turnover, selling a significant multiple of their assets per year. The ROE of such firms may be particularly dependent on performance of this metric, and hence asset turnover may be studied extremely carefully for signs of under-, or, over-performance. For example, same-store sales of many retailers is considered important as an indication that the firm is deriving greater profits from existing stores (rather than showing improved performance by continually opening stores).

Some sectors, such as the financial sector, rely on high leverage to generate acceptable ROE. Other industries would see high levels of leverage as unacceptably risky. DuPont analysis enables third parties that rely primarily on their financial statements to compare leverage among similar companies.

The return on assets (ROA) ratio developed by DuPont for its own use is now used by many firms to evaluate how effectively assets are used. It measures the combined effects of profit margins and asset turnover.[2]

The return on equity (ROE) ratio is a measure of the rate of return to stockholders.[3] Decomposing the ROE into various factors influencing company performance is often called the DuPont system.[4]

Retrieved from "http://en.turkcewiki.org/w/index.php?title=DuPont_analysis&oldid=958426566"
This website is a mirror of Wikipedia, and is not affiliated with the Wikimedia Foundation.
Categories:
Hidden categories: