In astrology, a planet's domicile (or less commonly house, not to be confused with the astrological house system) is the zodiac sign over which it has rulership. This is a separate concept from the houses of the horoscope. A planetary ruler is given to each sign, over which the planet is said to have a more powerful influence when positioned therein. The ruling planet associated with a sign is also used as an implied focus of interpretation for the signs on house cusps in a chart. A planet is considered to be in domal dignity when it is positioned in the sign it rules. This is the strongest of the five essential dignities of a planet.

The assignments of the ruling planets appear to be based upon the Northern Hemisphere seasons, as the sun (Sol) and the moon, the principal bearers of light and heat, were awarded to Leo and Cancer, respectively, since the months the sun passed through these signs (in ancient times) were the warmest and had the longest days.

Conversely, Saturn, the most distant (and hence the "coldest") of the planets known to ancients, was accorded the rulership of Aquarius and Capricorn, the signs opposite Leo and Cancer, respectively.

Jupiter, being next farthest away, was given the signs on either side of Aquarius and Capricorn (Pisces and Sagittarius), and Mars, next in order, received the next two (Aries and Scorpio).

Since Mercury never appears more than one sign from the sun in either direction, it was deemed to rule the two signs on either side of Leo and Cancer (Virgo and Gemini), and since Venus can never be found more than two signs from the Sun, it obtained the rulership of Libra and Taurus.

The discovery of planets outside of the geocentric field of vision in modern times provided a dilemma for astrologers, which most eventually resolved by a consensus declaring Uranus to be Aquarius' ruling planet while assigning Neptune to Pisces and later, Pluto, considered the higher octave of Mars, was given to Scorpio.

Some modern authorities use the concept of "night rulerships" to find room for the additional dignities. Uranus was designated the day ruler of Aquarius while Saturn was to be its night ruler. Similarly, Neptune was the day ruler of Pisces, leaving Jupiter as the night ruler, and Pluto was the day ruler of Scorpio with Mars as the night ruler. This notion probably had its origin in the concept of astrological sect, but this was the only vestige of the sect in the modern tradition. Unfortunately, no allowance was made for these modern suggestions in the complex traditional doctrine of essential dignities, but the idea was very popular.

The use of dual rulerships in a manner such as this was also be known as "co-rulership". Some astrologers believed that the new co-rulers were primary rulers of the signs with which they were associated and might have been sole rulers of those signs, and if that was the case, two other planets, one linked to Libra or Taurus, and the other to Virgo or Gemini, may await discovery, thus eliminating the need for dual rulership of a sign. Although the status of Ceres has not been conclusively decided at the moment in astrology, it has been suggested as the ruler of Virgo or Taurus. For some modern astrologers including many European astrologers, it is the ruling planet of Virgo based upon observation of its role in synastric charts. Significantly, the generation of astrologers who first encountered Ceres in the early 19th century after its discovery, before its demotion to asteroid in the middle of the 19th century, assigned it rulership of Virgo. For a minority of astrologers, it is the ruling planet of Taurus along with Venus. The possibility exists that it isn't involved with any sign, but in any event, it can almost definitely be attributed to the Earth element.

Domiciles in "Tetrabiblos" by Claudius Ptolemy. 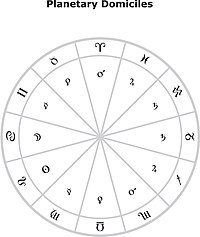 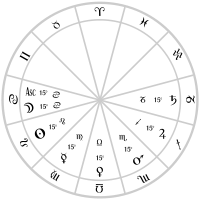 Some modern astrologers assign what is called "natural" rulership of each house of the horoscope to a different planet, in the same way as the zodiac signs are said to have rulers. Traditionally, however, the rulership of houses was understood to apply only in the individual birth-chart, in what is called "accidental" rulership. This understanding is followed by most astrologers. In this case, the rulership of a house in the "native's" horoscope is associated with the planets that rule the sign on the cusp of the house and with any planets found on or near the house cusp. The ruling planet guides the expression of the planets occupying that house, similar to the way a planet on the ASC expresses and mediates the expression of planets throughout the chart as they filter through one's personality (symbolized by the ASC and 1st house.)

There are several different scenarios that one can use to determine the rulership of a house:

When a person attempts to determine the rulership of a house, the more planets or bodies that rule the house, the more complex the matters of that house will be. Especially when aspects to the rulers are considered. Generally, the sign on the cusp will be the outward representation of the rulership. The ruler of the sign inside the house will not be readily apparent but will manifest itself at critical points in a person's life and in deciding life directions. Meaning, the ruler of the sign inside the house imparts its values and shares 'executive decision' making but is not involved in the actions taken or the outward expression of matters of that house.

As in the case of intercepted houses, the sign that is in the middle of the house is the sign that the native must transcend before he can progress to the next phase of the house's rulership. Therefore, as in the previous example, if a house is intercepted with the sign of Capricorn then the native must will initially present with many Capricorn qualities and will have to work somewhat behind the scenes to get the Aquarian qualities to express. Ultimately, intercepted Aquarius and Uranus will express itself but be mediated strongly through Capricorn and its ruler, Saturn.

Furthermore, the ancients assigned domal dignity to the North and South nodes of the Moon, although these do not qualify as rulerships since the nodes do not have governance over any signs.

Significant disagreement exists within the Western astrological community about some of the signs that are often still said to share rulers which is a problem that is taking time to resolve. Many suggestions have been made, but consensus could take decades, as it did in the cases of Uranus and Neptune.[citation needed]

Classical astrologers whose methods are rooted in traditional methods do not use any of the outer planets not recognized by the ancients as the rulers of any of the 12 signs, preferring the traditional rulership scheme.

On the other hand, most modern, psychologically-oriented astrologers do use the outer planets as ruling planets of those particular three signs listed above. Others also use ancient rulers while using modern planets as the co-ruler of those signs.

Other astrologers do not use any of the planets as sign rulers (Cosmobiologists, Uranian astrologers, Hamburg School of Astrology, other groups/individuals), preferring to focus more on the astrological aspects and other portions of the horoscope instead that lend themselves more easily to empirical study.

Most astrologers practicing Vedic astrology (Jyotish) only use the traditional rulership system.

Retrieved from "http://en.turkcewiki.org/w/index.php?title=Domicile_(astrology)&oldid=947305535"
This website is a mirror of Wikipedia, and is not affiliated with the Wikimedia Foundation.
Categories:
Hidden categories: