Distortion is the alteration of the original shape (or other characteristic) of something. In communications and electronics it means the alteration of the waveform of an information-bearing signal, such as an audio signal representing sound or a video signal representing images, in an electronic device or communication channel.

Distortion is usually unwanted, and so engineers strive to eliminate or minimize it. In some situations, however, distortion may be desirable. For example, in FM broadcasting and noise reduction systems like the Dolby system, an audio signal is deliberately distorted in ways that emphasize aspects of the signal that are subject to electrical noise, then it is symmetrically "undistorted" after passing through a noisy communication channel, reducing the noise in the signal. Distortion is also used as a musical effect, particularly with electric guitars. 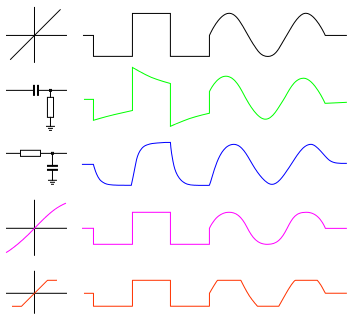 In telecommunication and signal processing, a noise-free system can be characterised by a transfer function, such that the output

can be written as a function of the input

the output is undistorted. Distortion occurs when the transfer function F is more complicated than this. If F is a linear function, for instance a filter whose gain and/or delay varies with frequency, the signal suffers linear distortion. Linear distortion does not introduce new frequency components to a signal but does alter the balance of existing ones.

This diagram shows the behaviour of a signal (made up of a square wave followed by a sine wave) as it is passed through various distorting functions.

The transfer function of an ideal amplifier, with perfect gain and delay, is only an approximation. The true behavior of the system is usually different. Nonlinearities in the transfer function of an active device (such as vacuum tubes, transistors, and operational amplifiers) are a common source of non-linear distortion; in passive components (such as a coaxial cable or optical fiber), linear distortion can be caused by inhomogeneities, reflections, and so on in the propagation path.

Amplitude distortion is distortion occurring in a system, subsystem, or device when the output amplitude is not a linear function of the input amplitude under specified conditions.

This form of distortion mostly occurs due to electrical reactance. Here, all the components of the input signal are not amplified with the same phase shift, hence making some parts of the output signal out of phase with the rest of the output.

Can be found only in dispersive media. In a waveguide, phase velocity varies with frequency. In a filter, group delay tends to peak near the cut-off frequency, resulting in pulse distortion. When analog long distance trunks were commonplace, for example in 12 channel carrier, group delay distortion had to be corrected in repeaters.

As the system output is given by y(t) = F(x(t)), then if the inverse function F−1 can be found, and used intentionally to distort either the input or the output of the system, then the distortion is corrected.

An example of a similar correction is where LP/vinyl recordings or FM audio transmissions are deliberately pre-emphasised by a linear filter, the reproducing system applies an inverse filter to make the overall system undistorted.

Correction is not possible if the inverse does not exist—for instance if the transfer function has flat spots (the inverse would map multiple input points to a single output point). This produces an uncorrectable loss of information. Such a situation can occur when an amplifier is overdriven—causing clipping or slew rate distortion when, for a moment, the amplifier characteristics alone and not the input signal determine the output.

Many symmetrical electronic circuits reduce the magnitude of even harmonics generated by the non-linearities of the amplifier's components, by combining two signals from opposite halves of the circuit where distortion components that are roughly the same magnitude but out of phase. Examples include push-pull amplifiers and long-tailed pairs.

In binary signaling such as FSK, distortion is the shifting of the significant instants of the signal pulses from their proper positions relative to the beginning of the start pulse. The magnitude of the distortion is expressed in percent of an ideal unit pulse length. This is sometimes called 'bias' distortion.

Telegraphic distortion is a similar older problem, distorting the ratio between "mark" and "space" intervals. [1]

In the art world, a distortion is any change made by an artist to the size, shape or visual character of a form to express an idea, convey a feeling or enhance visual impact. Often referred to as "abstraction," examples of distortion include "The Weeping Woman" by Picasso and "The Adoration of the Shepherds" by El Greco. 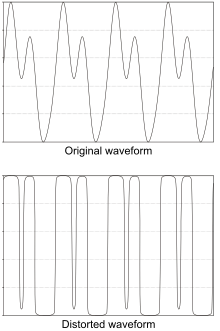 In this context, distortion refers to any kind of deformation of an output waveform compared to its input, usually clipping, harmonic distortion, or intermodulation distortion (mixing phenomena) caused by non-linear behavior of electronic components and power supply limitations.[2] Terms for specific types of nonlinear audio distortion include: crossover distortion, slew-Induced Distortion (SID) and transient intermodulation (TIM).

Distortion in music is often intentionally used as an effect when applied to an electric guitar signal in styles of rock music such as heavy metal and punk rock (see also overdrive and distortion synthesis). Other forms of audio distortion that may be referred to are non-flat frequency response, compression, modulation, aliasing, quantization noise, wow and flutter from analog media such as vinyl records and magnetic tape. The human ear cannot hear phase distortion, except that it may affect the stereo imaging. (See also: Audio system measurements.)

In most fields, distortion is characterized as unwanted change to a signal.

In optics, image/optical distortion is a divergence from rectilinear projection caused by a change in magnification with increasing distance from the optical axis of an optical system.

In cartography, a distortion is the misrepresentation of the area or shape of a feature. The Mercator projection, for example, distorts by exaggerating the size of regions at high latitude.

Retrieved from "http://en.turkcewiki.org/w/index.php?title=Distortion&oldid=938282885"
This website is a mirror of Wikipedia, and is not affiliated with the Wikimedia Foundation.
Categories:
Hidden categories: