In finance, discounted cash flow (DCF) analysis is a method of valuing a security, project, company, or asset using the concepts of the time value of money. Discounted cash flow analysis is widely used in investment finance, real estate development, corporate financial management and patent valuation. It was used in industry as early as the 1700s or 1800s, widely discussed in financial economics in the 1960s, and became widely used in U.S. courts in the 1980s and 1990s.

Discounted cash flow calculations have been used in some form since money was first lent at interest in ancient times. Studies of ancient Egyptian and Babylonian mathematics suggest that they used techniques similar to discounting of the future cash flows. This method of asset valuation differentiated between the accounting book value, which is based on the amount paid for the asset.[2] Following the stock market crash of 1929, discounted cash flow analysis gained popularity as a valuation method for stocks. Irving Fisher in his 1930 book The Theory of Interest and John Burr Williams's 1938 text The Theory of Investment Value first formally expressed the DCF method in modern economic terms.[3]

The discounted cash flow formula is derived from the future value formula for calculating the time value of money and compounding returns.

Thus the discounted present value (for one cash flow in one future period) is expressed as:

Where multiple cash flows in multiple time periods are discounted, it is necessary to sum them as follows:

for each future cash flow (FV) at any time period (t) in years from the present time, summed over all time periods. The sum can then be used as a net present value figure. If the amount to be paid at time 0 (now) for all the future cash flows is known, then that amount can be substituted for DPV and the equation can be solved for r, that is the internal rate of return.

All the above assumes that the interest rate remains constant throughout the whole period.

For continuous cash flows, the summation in the above formula is replaced by an integration:

is now the rate of cash flow, and

The act of discounting future cash flows answers "how much money would have to be invested currently, at a given rate of return, to yield the forecast cash flow, at its future date?" In other words, discounting returns the present value of future cash flows, where the rate used is the cost of capital that appropriately reflects the risk, and timing, of the cash flows.

For the latter, various models have been developed, where the premium is (typically) calculated as a function of the asset's performance with reference to some macroeconomic variable - for example, the CAPM compares the asset's historical returns to the "overall market's"; see Capital asset pricing model#Asset-specific required return and Asset pricing#General Equilibrium Asset Pricing.

An alternate, although less common approach, is to apply a "fundamental valuation" method, such as the "T-model", which instead relies on accounting information. (Other methods of discounting, such as hyperbolic discounting, are studied in academia and said to reflect intuitive decision-making, but are not generally used in industry. In this context the above is referred to as "exponential discounting".)

Note that the terminology "expected return", although formally the mathematical expected value, is often used interchangeably with the above, where "expected" means "required" or “demanded” in the corresponding sense.

The method may also be modified by industry, for example different have been described when choosing a discount rate in a healthcare setting.[5]

Methods of appraisal of a company or project[edit]

Flowchart for a typical DCF valuation, with each step detailed in the text (click on image to see at full size) 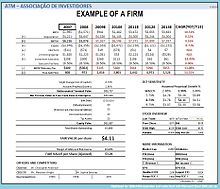 For these valuation purposes, a number of different DCF methods are distinguished today, some of which are outlined below. The details are likely to vary depending on the capital structure of the company. However the assumptions used in the appraisal (especially the equity discount rate and the projection of the cash flows to be achieved) are likely to be at least as important as the precise model used. Both the income stream selected and the associated cost of capital model determine the valuation result obtained with each method. (This is one reason these valuation methods are formally referred to as the Discounted Future Economic Income methods.) The below is offered as a simple treatment; for the components / steps of business modeling here, see the list for "Equity valuation" under Outline of finance#Discounted cash flow valuation.

The following difficulties are identified with the application of DCF in valuation:

To address the lack of integration of the short and long term importance, value and risks associated with natural and social capital into the traditional DCF calculation, companies are valuing their environmental, social and governance (ESG) performance through an Integrated Management approach to reporting, that expands DCF or Net Present Value to Integrated Future Value (IntFV). [14]

This allows companies to value their investments not just for their financial return but also the long term environmental and social return of their investments. By highlighting environmental, social and governance performance in reporting, decision makers have the opportunity to identify new areas for value creation that are not revealed through traditional financial reporting. As an example, the social cost of carbon is one value that can be incorporated into Integrated Future Value calculations to encompass the damage to society from greenhouse gas emissions that result from an investment.

This is an integrated approach to reporting that supports Integrated Bottom Line (IBL) decision making, which takes triple bottom line (TBL) a step further and combines financial, environmental and social performance reporting into one balance sheet. This approach provides decision makers with the insight to identify opportunities for value creation that promote growth and change within an organization. [15]

Retrieved from "http://en.turkcewiki.org/w/index.php?title=Discounted_cash_flow&oldid=965299836"
This website is a mirror of Wikipedia, and is not affiliated with the Wikimedia Foundation.
Categories:
Hidden categories: