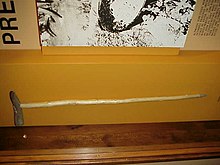 In archaeology and anthropology, a digging stick, or sometimes yam stick, is a wooden implement used primarily by subsistence-based cultures to dig out underground food such as roots and tubers or burrowing animals and anthills.[1] The stick may also have other uses in hunting or general domestic tasks.

They are common to the Indigenous Australians but also other peoples worldwide. The tool normally consists of little more than a sturdy stick which has been shaped or sharpened and perhaps hardened by being placed temporarily in a fire. Fashioned with handles for pulling or pushing, it forms a prehistoric plow, and is also a precursor of most modern agricultural handtools.[2]

It is a simple device, and has to be tough and hardy in order not to break.

Mexico and the Mesoamerican region[edit]

In Mexico and the Mesoamerican region, the digging stick was the most important agricultural tool throughout the region.[3][4]

The coa stick normally flares out into a triangle at the end and is used for cultivating maize. It is still used for agriculture in some indigenous communities, with some newer 20th-century versions having the addition of a little metal tip.

Other digging sticks, according to Native Americans of the Columbia Plateau, have been used since time immemorial to gather edible roots like balsamroot, bitterroot, camas, and varieties of biscuitroot. Typical digging sticks were and are still about 2 to 3 feet in length, usually slightly arched, with the bottom tip shaved off at an angle. A 5 to 8 inch cross-piece made of antler, bone, or wood was fitted perpendicularly over the top of the stick, allowing the use of two hands to drive the tool into the ground. Since contact with the Europeans in the 19th century, Native Americans have also adapted the use of a metal in making digging sticks.

Ethiopia and the Harar region[edit]

The deungora is a particularly long digging stick is about 110 centimeters, or approximately 3.6 feet, in length with a socket-hafted pointed iron blade as the tip. What's unique about this digging stick is that a bored stone, about 15 centimeters in diameter, is attached at the opposing end. This stone shares the same form as other bored stones that have been discovered in archaeological sites in Africa.[5]

Maresha is the Gurage name, also the same word used by the Amhara, for a digging stick that differs in construction because of its forked form. It is used primarily to dig holes for construction, planting, and harvesting roots and tubers. This tool is used as a plow to turn over the soil of an entire field before planting. It is used to break clods of soil in areas where the soil is hard or in areas that may be too steep for plowing, and to dig holes for construction or to transplant domestic plants. When compared to the ankassay, this digging stick can perform the same duties and in addition can be used as a hoe.[5]

The Kuman people of this region were horticulturists who used basic tools such as the digging stick, wooden hoe, and wooden spade in their daily lives. Eventually they started to use more sophisticated tools such as iron spades and pick-axes.[6]

Two main types of digging sticks both shared a similar shape but differed in size:

Retrieved from "http://en.turkcewiki.org/w/index.php?title=Digging_stick&oldid=868738279"
This website is a mirror of Wikipedia, and is not affiliated with the Wikimedia Foundation.
Categories:
Hidden categories: