Desloge Consolidated Lead Company was a lead mining company in the Southeast Missouri Lead District that was operated by the Desloge family in the 19th and early 20th century. The Desloge lead operations in the "Old Lead Belt", in the eastern Ozark Mountains, helped Missouri become the world's premier lead mining area. 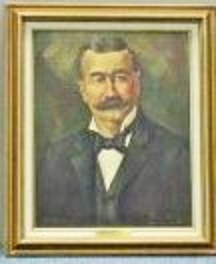 The businesses that would become the Desloge Consolidated Lead Company began around 1824, when Firmin Rene Desloge — founder of the Desloge Family in America — built a smelting furnace as an extension of his mercantile business in Potosi, Missouri.[1][2][3]

His son, Firmin V. Desloge,[4][5] expanded mining operations and moved management to Bonne Terre, Missouri.[6] On June 5, 1874, a charter was granted to the Missouri Lead and Smelting Company, which was renamed the Desloge Lead Company on February 21, 1876. In 1876 and 1877, the company sank three shafts and built a new mill in Bonne Terre.

A fire in March 1886 destroyed the concentrating mill plant and damaged the rest of the surface plant. The following year, the company's remaining assets were sold to St. Joseph Lead Company, which made Firmin V. Desloge a trustee on its board, a post he would hold until his death. This merger helped the St. Joe company become the "greatest lead-mining and smelting company in the world.[7]

After the fire, Desloge and his family took an option on a piece of land owned by the Bogy family which was called "Mine-a-Joe", and started another mining operation under the name Desloge Consolidated Lead Company. The new company cleared the land and built company houses for its workers just west of present-day Desloge, Missouri.[8]

In 1893, the Desloges opened a new mine in St. Francois County, Missouri, just north of the St. Joe Lead Company property in Bonne Terre, on a tract of land originally granted to Jean Bte. Pratte and designated as U. S. Survey No. 3099.[3] The mill and smelting plant could produce 500 tons of lead per day.[9][10]

To serve the Desloge and St. Joe mines, Firmin Desloge II built the first railroads to penetrate the disseminated lead field of St. Francois County: the Desloge Railway, the Mississippi River and Bonne Terre Railway[13] and the Valley Railroad.

Desloge also helped develop the St. Louis, Iron Mountain and Southern Railway (aka the Iron Mountain Railroad), which opened in 1874 from St. Louis to Texarkana, Arkansas. When the St. Joseph Lead Company built a 13.5-mile narrow-gauge railroad from its mines to the Iron Mountain tracks at Summit in Washington County, the Desloge Company paid one-third of the costs.

The Revenue Act of 1894, also known as the Wilson-Gorman Tariff, lowered protective tariffs on lead (although it raised rates on sugar and other materials). The prospect of cheaper imported lead threatened the Desloge company and other southeast Missouri lead businesses, so Firmin Desloge II immediately went to Washington, D.C., to lobby for repeal. In the meantime, he spent part of his own fortune to continue operations, retained his employees, and stockpiled instead of sold his pig lead.[14] The lead industry's lobbying efforts paid off in 1897, when the Dingley Act once again raised barriers to lead imports.[15]

Around 1916, the Desloge Consolidated Lead Company moved its corporate offices from Desloge to the 1892 Rialto Building in downtown St. Louis. Despite the city's history as a fur-trading center, "more money passed through St. Louis as a result of the lead business in Missouri,” Robert E. McHenry wrote in his 2006 book Chat Dumps of The Missouri Lead Belt.[16]

The Desloge Consolidated Lead Company, and specifically Firmin Rene Desloge and Firmin Desloge II, were described in 1932 as "the most distinguished of American mining engineers".[21]

The name Desloge Consolidated Lead Company was used for a company formed in 2004 as an investment holding company by a Desloge family descendant, Christopher Desloge.[22] The name was changed in 2005 to Madaket Growth, LLC.

Retrieved from "http://en.turkcewiki.org/w/index.php?title=Desloge_Consolidated_Lead_Company&oldid=971980300"
This website is a mirror of Wikipedia, and is not affiliated with the Wikimedia Foundation.
Categories:
Hidden categories: