This article is about the demographics of Mongolia, including population density, ethnicity, education level, health of the populace, economic status, religious affiliations and other aspects of the population. 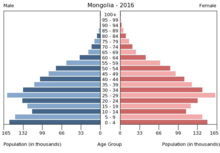 The demonym for the people of Mongolia is Mongolian. The name Mongol usually accounts for people of the Mongol ethnic group, thus excluding Turkic groups such as Kazakhs and Tuvans.

Ethnic Mongols account for about 97% of the population and consist of Khalkh and other groups, all distinguished primarily by dialects of the Mongolian language. The Khalkhs make up 86% of the ethnic Mongol population. The remaining 14% include Oirats, Buryats and others. Ethnic distinctions among the Mongol subgroups are relatively minor. Language or tribal differences are not a political or social issue.

In around 1860, part of the Middle jüz Kazakhs who sought refuge from Qing Empire massacre in Xinjiang came to Mongolia and were allowed to settle down in Bayan-Ölgii Province. There are smaller numbers of Russian, Chinese, Korean and American people working in Mongolia, since 1990. 3,000 Westerners live in Mongolia, accounting for 0.1% of its total population.[9]

English is the most widely used foreign language followed by Russian. Lately, Chinese,[10] Japanese, Korean and German are gaining popularity.

Literacy rate is the percentage of people over the age of 15 who can read and write.

After a decline in enrollment ratios during the transition to a market economy in the 1990s, school attendance is now once more near-universal: primary school attendance rate is estimated at 97%, and adult literacy at 98%.[15] 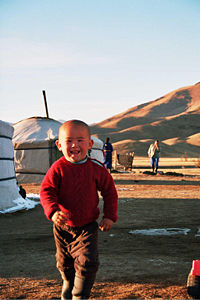 Various forms of Shamanism have been widely practiced throughout the history of what is now Mongolia, as such beliefs were common among nomadic people in Asian history. Such beliefs gradually gave way to Tibetan Buddhism, but shamanism has left a mark on Mongolian religious culture, and continues to be practiced.

Traditionally, Tibetan Buddhism was the predominant religion. However, it was suppressed under the communist regime until 1990, with only one showcase monastery allowed to remain. Since 1990, as liberalization began, Buddhism has encountered a resurgence.

Life in sparsely populated Mongolia has become more urbanized. Nearly half of the people live in the capital, Ulaanbaatar, and in other provincial centers. Semi nomadic life still predominates in the countryside, but settled agricultural communities are becoming more common. Mongolia's population growth rate is estimated at 1.54% (2000 census). About two-thirds of the total population is under age 30, 36% of whom are under 14.

* - city proper, Nalaikh, Baganuur, Bagakhangai not included in this figure, they are separated in the table.

Base demographic indicators for Mongolia[edit]

Retrieved from "http://en.turkcewiki.org/w/index.php?title=Demographics_of_Mongolia&oldid=940655412"
This website is a mirror of Wikipedia, and is not affiliated with the Wikimedia Foundation.
Categories:
Hidden categories: