The decomposition of time series is a statistical task that deconstructs a time series into several components, each representing one of the underlying categories of patterns.[1] There are two principal types of decomposition, which are outlined below.

Decomposition based on rates of change[edit]

This is an important technique for all types of time series analysis, especially for seasonal adjustment.[2] It seeks to construct, from an observed time series, a number of component series (that could be used to reconstruct the original by additions or multiplications) where each of these has a certain characteristic or type of behavior. For example, time series are usually decomposed into:

whereas a multiplicative model would be

The theory of time series analysis makes use of the idea of decomposing a times series into deterministic and non-deterministic components (or predictable and unpredictable components).[2] See Wold's theorem and Wold decomposition.

Kendall shows an example of a decomposition into smooth, seasonal and irregular factors for a set of data containing values of the monthly aircraft miles flown by UK airlines.[5]

In policy analysis, forecasting future production of biofuels is key data for making better decisions, and statistical time series models have recently been developed to forecast renewable energy sources, and a multiplicative decomposition method was designed to forecast future production of biohydrogen. The optimum length of the moving average (seasonal length) and start point, where the averages are placed, were indicated based on the best coincidence between the present forecast and actual values.[6] 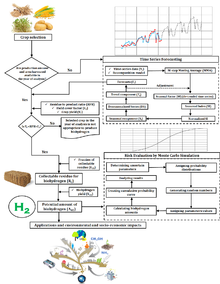 An example of using multiplicative decomposition in biohydrogen production forecast.[6]

An example of statistical software for this type of decomposition is the program BV4.1 that is based on the Berlin procedure.

Retrieved from "http://en.turkcewiki.org/w/index.php?title=Decomposition_of_time_series&oldid=1030301808"
This website is a mirror of Wikipedia, and is not affiliated with the Wikimedia Foundation.
Categories:
Hidden categories: