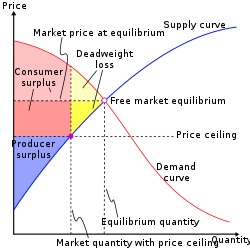 Deadweight loss, also known as excess burden, is a measure of lost economic efficiency when the socially optimal quantity of a good or a service is not produced. Non-optimal production can be caused by monopoly pricing in the case of artificial scarcity, a positive or negative externality, a tax or subsidy, or a binding price ceiling or price floor such as a minimum wage.

Assume a market for nails where the cost of each nail is $0.10. Demand decreases linearly; there is a high demand for free nails and zero demand for nails at a price per nail of $1.10 or higher. The price of $0.10 per nail represents the point of economic equilibrium in a competitive market.

If market conditions are perfect competition, producers would charge a price of $0.10, and every customer whose marginal benefit exceeds $0.10 would buy a nail. A monopoly producer of this product would typically charge whatever price will yield the greatest profit for themselves, regardless of lost efficiency for the economy as a whole. In this example, the monopoly producer charges $0.60 per nail, thus excluding every customer from the market with a marginal benefit less than $0.60. The deadweight loss due to monopoly pricing would then be the economic benefit foregone by customer with a marginal benefit of between $0.10 and $0.60 per nail. The monopolist has "priced them out of the market", even though their benefit exceeds the true cost per nail.

Conversely, deadweight loss can also arise from consumers buying more of a product than they otherwise would based on their marginal benefit and the cost of production. For example, if in the same nail market the government provided a $0.03 subsidy for every nail produced, the subsidy would reduce the market price of each nail to $0.07, even though production actually still costs $0.10 per nail. Consumers with a marginal benefit of between $0.07 and $0.10 per nail would then buy nails, even though their benefit is less than the real production cost of $0.10. The difference between the cost of production and the purchase price then creates the "deadweight loss" to society.

A tax has the opposite effect of a subsidy. Whereas a subsidy entices consumers to buy a product that would otherwise be too expensive for them in light of their marginal benefit (price is lowered to artificially increase demand), a tax dissuades consumers from a purchase (price is increased to artificially lower demand). This excess burden of taxation represents the lost utility for the consumer. A common example of this is the so-called sin tax, a tax levied against goods deemed harmful to society and individuals. For example, "sin taxes" levied against alcohol and tobacco are intended to artificially lower demand for these goods; some would-be users are priced out of the market, i.e. total smoking and drinking are reduced. Indirect tax (VAT), weighs on the consumer, is not a cause of loss of surplus for the producer, but affects consumer utility. 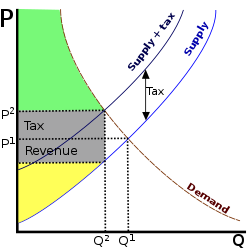 The deadweight loss is the area of the triangle bounded by the right edge of the grey tax income box, the original supply curve, and the demand curve. It is called Harberger's triangle.

Harberger's triangle, generally attributed to Arnold Harberger, shows the deadweight loss (as measured on a supply and demand graph) associated with government intervention in a perfect market. Mechanisms for this intervention include price floors, caps, taxes, tariffs, or quotas. It also refers to the deadweight loss created by a government's failure to intervene in a market with externalities.[1]

In the case of a government tax, the amount of the tax drives a wedge between what consumers pay and what producers receive, and the area of this wedge shape is equivalent to the deadweight loss caused by the tax.[2]

The area represented by the triangle results from the fact that the intersection of the supply and the demand curves are cut short. The consumer surplus and the producer surplus are also cut short. The loss of such surplus that is never recouped and represents the deadweight loss.

Some economists like James Tobin have argued that these triangles do not have a huge impact on the economy, but others like Martin Feldstein maintain that they can seriously affect long-term economic trends by pivoting the trend downwards and causing a magnification of losses in the long run.

In modern economic literature, the most common measure of a taxpayer's loss from a distortionary tax, such as a tax on bicycles, is the equivalent variation, the maximum amount that a taxpayer would be willing to forgo in a lump sum to avoid the distortionary tax. The deadweight loss can then be interpreted as the difference between the equivalent variation and the revenue raised by the tax. The difference is attributable to the behavioral changes induced by a distortionary tax that are measured by a substitution effect. However, that is not the only interpretation, and Lind and Granqvist (2010) point out that Pigou did not use a lump sum tax as the point of reference to discuss deadweight loss (excess burden).

The Deadweight loss of taxation;the tax increases the price paid by buyers to Pc and decreases price received by sellers to Pp and the quantity sold reduces from Qe to Qt.

When a tax is levied on buyers, the demand curve shifts downward in accordance with the size of the tax. Similarly, when tax is levied on sellers, the supply curve shifts upward by the size of tax. When the tax is imposed, the price paid by buyers increases, and the price received by seller decreases. Therefore, buyers and sellers share the burden of the tax, regardless of how it is imposed. Since a tax places a "wedge" between the price buyers pay and the price sellers get, the quantity sold is reduced below the level that it would be without tax. To put it another way, a tax on good causes the size of market for that good to decrease.

For example, suppose that Will is a cleaner who is working in the cleaning service company and Amie hired Will to clean her room every week for $100. The opportunity cost of Will's time is $80, while the value of a clean house to Amie is $120. Hence, each of them get same amount of benefit from their deal. Amie and Will each receive a benefit of $20, making the total surplus from trade $40.

However, if the government were to decide to impose a $50 tax upon the providers of cleaning services, their trade would no longer benefit them. Amie would not willing to pay any price above $120, and Will would no longer receive a payment that exceeds his opportunity cost. As a result, not only do Amie and Will both give up the deal, but Amie has to live in a dirtier house, and Will does not receive his desired income. They have thus lost amount of the surplus that they would have received from their deal, and at the same time, this made each of them worse off to the tune of $40 in value.

Government revenue is also affected by this tax: since Amie and Will have abandoned the deal, the government also loses any tax revenue that would have resulted from wages. This $40 is referred to as the deadweight loss. It causes losses for both buyers and sellers in a market, as well as decreasing government revenues. Taxes cause deadweight losses because they prevent buyers and sellers from realizing some of the gains from trade.[3]

In the graph, the deadweight loss can be seen as the shaded area between the supply and demand curves. While the demand curve shows the value of goods to the consumers, the supply curve reflects the cost for producers. As the example above explains, when the government imposes a tax upon taxpayers, the tax increases the price paid by buyers to Pc and decreases price received by sellers to Pp. Buyers and sellers (Amie and Will) give up the deal between them and exit the market. Thus, the quantity sold reduces from Qe to Qt. The deadweight loss occurs because the tax deters these kinds of beneficial trades in the market.[3]

A tax cause a deadweight loss because it causes buyers and sellers to change their behavior. Buyers tend to consume less when the tax raises the price. When the tax lowers the price received by sellers, they in turn produce less. As a result, the overall size of the market decreases below the optimum equilibrium. The elasticities of supply and demand determine to what extent the tax distorts the market outcome. As the elasticities of supply and demand increase, so does the deadweight loss resulting from a tax.[3]

The varying deadweight loss from a tax also affect the government's total tax revenue. Tax revenue is represented by the area of the rectangle between the supply and demand curves. When a low tax is levied, tax revenue is relatively small. As the size of the tax increases, tax revenue expands. However, when a much higher tax is levied, tax revenue eventually decreases. The higher tax reduces the total size of the market; Although taxes are taking a larger slice of the "pie," the total size of the pie is reduced. Just as in the nail example above, beyond a certain point, the market for a good will eventually decrease to zero.[3]

Deadweight loss of a monopoly[edit]

A deadweight loss occurs with monopolies in the same way that a tax causes deadweight loss. When a monopoly, as a "tax collector," charges a price in order to consolidate its power above marginal cost, it drives a "wedge" between the costs born by the consumer and supplier. Imposing this effective tax distorts the market outcome, and the wedge causes a decrease in the quantity sold, below the social optimum. It is important to remember the difference between the two cases: whereas the government receives the revenue from a genuine tax, monopoly profits are collected by a private firm.[3]

Retrieved from "http://en.turkcewiki.org/w/index.php?title=Deadweight_loss&oldid=958770775"
This website is a mirror of Wikipedia, and is not affiliated with the Wikimedia Foundation.
Categories: