Jump to navigation Jump to search
For other uses, see Daughter (disambiguation). 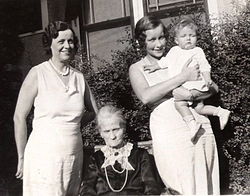 A 1931 photograph of four generations of mothers and daughters

A daughter is a female offspring- a girl or woman in relation to her parents. Daughterhood is the state of being someone's daughter. The male counterpart is a son. Analogously the name is used in several areas to show relations between groups or elements. The word daughter also has several other connotations attached to it, one of these being used in reference to female descendancy or consanguinity. It can also be used as a term of endearment coming from an elder.

In patriarchal societies, daughters often have different or lesser familial rights than sons. A family may prefer to have sons rather than daughters and subject daughters to female infanticide.[1] In some societies it is the custom for a daughter to be 'sold' to her husband, who must pay a bride price. The reverse of this custom, where the parents pay the husband a sum of money to compensate for the financial burden of the woman, is found in societies where women do not labour outside the home, and is referred to as dowry. 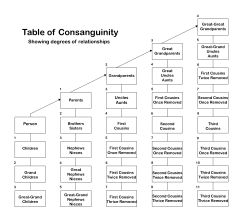 The number next to each box in the Table of Consanguinity indicates the degree of relationship relative to the given person. 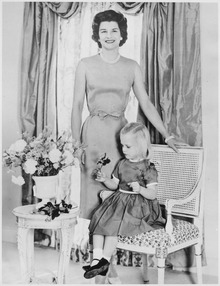 In the United States, the birth rate is 105 sons to 100 daughters which has been the natural birth rate since the 18th century. About 80 percent of prospective adoptive parents from the US will choose a girl over a boy.[citation needed] In fertility clinics that enable sex preferences, daughters are usually preferred over sons.[2] In the traditions of various Abrahamic religions, Luluwa is regarded as the first daughter to have ever existed.[3]

The role of the daughter has been an important theme in literature, especially when exploring relationships between family members and gender roles. Through exploration of the relationship between children and their parents, readers can draw conclusions about the impact of parenting style on the growth and development of a child's character and personality.

Notable daughters whose character and development has been impacted by their parents in literature have been:[4]

Retrieved from "http://en.turkcewiki.org/w/index.php?title=Daughter&oldid=919712079"
This website is a mirror of Wikipedia, and is not affiliated with the Wikimedia Foundation.
Categories:
Hidden categories: