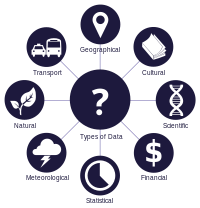 Some of the different types of data.

Data are characteristics or information, usually numerical, that are collected through observation.[1] In a more technical sense, data is a set of values of qualitative or quantitative variables about one or more persons or objects, while a datum (singular of data) is a single value of a single variable.[2]

Although the terms "data" and "information" are often used interchangeably, these terms have distinct meanings. In some popular publications, data is sometimes said to be transformed into information when it is viewed in context or in post-analysis.[3] In academic treatments of the subject, however, data are simply units of information. Data is employed in scientific research, businesses management (e.g., sales data, revenue, profits, stock price), finance, governance (e.g., crime rates, unemployment rates, literacy rates), and in virtually every other form of human organizational activity (e.g., censuses of the number of homeless people by non-profit organizations).

Data is measured, collected and reported, and analyzed, whereupon it can be visualized using graphs, images or other analysis tools. Data as a general concept refers to the fact that some existing information or knowledge is represented or coded in some form suitable for better usage or processing. Raw data ("unprocessed data") is a collection of numbers or characters before it has been "cleaned" and corrected by researchers. Raw data needs to be corrected to remove outliers or obvious instrument or data entry errors (e.g., a thermometer reading from an outdoor Arctic location recording a tropical temperature). Data processing commonly occurs by stages, and the "processed data" from one stage may be considered the "raw data" of the next stage. Field data is raw data that is collected in an uncontrolled "in situ" environment. Experimental data is data that is generated within the context of a scientific investigation by observation and recording.

Data has been described as the new oil of the digital economy.[4][5]

The Latin word data is the plural of datum, "(thing) given," neuter past participle of dare "to give".[6] Data may be used as a plural noun in this sense, with some writers—usually scientific writers—in the 20th century using datum in the singular and data for plural. However, in everyday language, "data" is most commonly used in the singular, as a mass noun (like "sand" or "rain"). The APA manual of style requires "data" to be plural.[7] 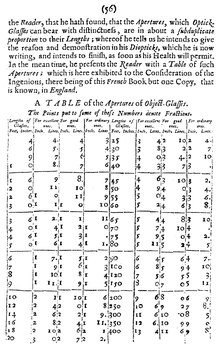 Data, information, knowledge and wisdom are closely related concepts, but each has its own role in relation to the other, and each term has its own meaning. According to a common view, data is collected and analyzed; data only becomes information suitable for making decisions once it has been analyzed in some fashion.[8] One can say that the extent to which a set of data is informative to someone depends on the extent to which it is unexpected by that person. The amount of information contained in a data stream may be characterized by its Shannon entropy.

Knowledge is the understanding based on extensive experience dealing with information on a subject. For example, the height of Mount Everest is generally considered data. The height can be measured precisely with an altimeter and entered into a database. This data may be included in a book along with other data on Mount Everest to describe the mountain in a manner useful for those who wish to make a decision about the best method to climb it. An understanding based on experience climbing mountains that could advise persons on the way to reach Mount Everest's peak may be seen as "knowledge". The practical climbing of Mount Everest's peak based on this knowledge may be seen as "wisdom". In other words, wisdom refers to the practical application of a person's knowledge in those circumstances where good may result. Thus wisdom complements and completes the series "data", "information" and "knowledge" of increasingly abstract concepts.

Data is often assumed to be the least abstract concept, information the next least, and knowledge the most abstract.[9] In this view, data becomes information by interpretation; e.g., the height of Mount Everest is generally considered "data", a book on Mount Everest geological characteristics may be considered "information", and a climber's guidebook containing practical information on the best way to reach Mount Everest's peak may be considered "knowledge". "Information" bears a diversity of meanings that ranges from everyday usage to technical use. This view, however, has also been argued to reverse the way in which data emerges from information, and information from knowledge.[10] Generally speaking, the concept of information is closely related to notions of constraint, communication, control, data, form, instruction, knowledge, meaning, mental stimulus, pattern, perception, and representation. Beynon-Davies uses the concept of a sign to differentiate between data and information; data is a series of symbols, while information occurs when the symbols are used to refer to something.[11][12]

Before the development of computing devices and machines, people had to manually collect data and impose patterns on it. Since the development of computing devices and machines, these devices can also collect data. In the 2010s, computers are widely used in many fields to collect data and sort or process it, in disciplines ranging from marketing, analysis of social services usage by citizens to scientific research. These patterns in data are seen as information which can be used to enhance knowledge. These patterns may be interpreted as "truth" (though "truth" can be a subjective concept), and may be authorized as aesthetic and ethical criteria in some disciplines or cultures. Events that leave behind perceivable physical or virtual remains can be traced back through data. Marks are no longer considered data once the link between the mark and observation is broken.[13]

Mechanical computing devices are classified according to the means by which they represent data. An analog computer represents a datum as a voltage, distance, position, or other physical quantity. A digital computer represents a piece of data as a sequence of symbols drawn from a fixed alphabet. The most common digital computers use a binary alphabet, that is, an alphabet of two characters, typically denoted "0" and "1". More familiar representations, such as numbers or letters, are then constructed from the binary alphabet. Some special forms of data are distinguished. A computer program is a collection of data, which can be interpreted as instructions. Most computer languages make a distinction between programs and the other data on which programs operate, but in some languages, notably Lisp and similar languages, programs are essentially indistinguishable from other data. It is also useful to distinguish metadata, that is, a description of other data. A similar yet earlier term for metadata is "ancillary data." The prototypical example of metadata is the library catalog, which is a description of the contents of books.

Gathering data can be accomplished through a primary source (the researcher is the first person to obtain the data) or a secondary source (the researcher obtains the data that has already been collected by other sources, such as data disseminated in a scientific journal). Data analysis methodologies vary and include data triangulation and data percolation.[14] The latter offers an articulate method of collecting, classifying and analyzing data using five possible angles of analysis (at least three) in order to maximize the research's objectivity and permit an understanding of the phenomena under investigation as complete as possible: qualitative and quantitative methods, literature reviews (including scholarly articles), interviews with experts, and computer simulation. The data is thereafter "percolated" using a series of pre-determined steps so as to extract the most relevant information.

Although data is also increasingly used in other fields, it has been suggested that the highly interpretive nature of them might be at odds with the ethos of data as "given". Peter Checkland introduced the term capta (from the Latin capere, “to take”) to distinguish between an immense number of possible data and a sub-set of them, to which attention is oriented.[15] Johanna Drucker has argued that since the humanities affirm knowledge production as "situated, partial, and constitutive," using data may introduce assumptions that are counterproductive, for example that phenomena are discrete or are observer-independent.[16] The term capta, which emphasizes the act of observation as constitutive, is offered as an alternative to data for visual representations in the humanities.

Retrieved from "http://en.turkcewiki.org/w/index.php?title=Data&oldid=966279285"
This website is a mirror of Wikipedia, and is not affiliated with the Wikimedia Foundation.
Categories:
Hidden categories: