Darra is a suburb in the City of Brisbane, Queensland, Australia. It is located about 14 kilometres (8.7 mi) southwest of Brisbane central business district. The first subdivisions in the area occurred in 1864.[3]

The houses are mainly of the Queenslander style built in the 1940s and 1950s. The majority of blocks in Darra are large enough to be subdivided, which is becoming popular in the suburb, hence making room for more modern homes. In the last few years, a property developer bought a vast tract of vacant, government land. As a result, there are now many new homes and townhouses built in Darra, which has increased its population and its geographical boundaries.

A portion of Darra comes from the Wolston Estate, consisting of 54 farms on an area of 3000 acres, offered for auction at Centennial Hall, Brisbane, on 16 October 1901.[4] Wolston Estate is the property of M. B. Goggs, whose father obtained the land forty years previously in the 1860s and after whom Goggs Road is named.[5] Only three of the farms sold at the original auction.[6]

In 1954, the Darra RSL Memorial Hall was opened.[3] Sumner was known as Darra until 1969 when it became a separate suburb. Vietnamese refugees began to settle in the area in 1975. The origin of the word Darra came from the Aboriginal word for 'stones'.[7] 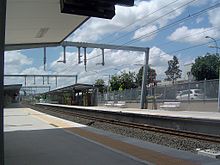 The Centenary Freeway and the Ipswich Motorway provide access to the Brisbane CBD. There are also buses that travel to surrounding suburbs such as Inala and Mount Ommaney.

Overall plans include the further redevelopment of the industrial park, which should provide an injection of capital into the community and further upgrade local infrastructure and community facilities. The Brisbane City Council has been active in rejuvenating the streetscapes of the Darra suburb as well as neighbouring recreational and parkland facilities in Jindalee and Sinnamon Park.

Retrieved from "http://en.turkcewiki.org/w/index.php?title=Darra,_Queensland&oldid=942231964"
This website is a mirror of Wikipedia, and is not affiliated with the Wikimedia Foundation.
Categories:
Hidden categories: