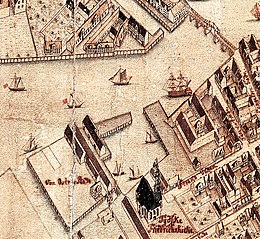 The Danes settled in St. Thomas in 1668.[2] The first successful colonization of Sankt Thomas employed ships of the Royal Dano-Norwegian Navy, the yacht Den forgyldte Krone and the frigate Færøe (referring to the islands, but often erroneously translated as Pharaoh), but the company quickly began employing ships of their own, while occasionally relying on the royal navy for escorts and protection. From August 30, 1680, it became known[clarification needed] as the West India–Guinea Company. At first, the company had difficulties being profitable, but eventually it began to increase revenue by raising taxes and bringing all colonial exports into Copenhagen directly.[3] St. John was purchased in 1718 and St. Croix from the French in 1733.

In the 17th and 18th centuries, the company flourished from the North Atlantic triangular trade routes. Slaves from the Gold Coast of Africa were traded for molasses and rum in the West Indies.

The company administered the colonies until 1754, when the Danish government's "Chamber of Revenues" took control. From 1760 to 1848, the governing body was known as Vestindisk-guineiske rente- og generaltoldkammer.

Frederik Bargum revived the company as Det Guineiske kompagni via Royal resolution of March 18, 1765, to maintain the trade with the Danish Gold Coast colonies. In November, they received the forts of Christiansborg and Fredensborg for 20 years. The company, however, never enjoyed a trade monopoly like the Dutch West India Company. Competition for trade remained among all Danish, Norwegian, Schleswig and Holstein companies.

The financially troubled company was liquidated on November 22, 1776. In anticipation of this, the Dano-Norwegian government took control of the granted forts from August–September 1775. Bargum had fled the country to escape his creditors in 1774.[4]

This list is incomplete; you can help by expanding it.

Retrieved from "http://en.turkcewiki.org/w/index.php?title=Danish_West_India_Company&oldid=970887387"
This website is a mirror of Wikipedia, and is not affiliated with the Wikimedia Foundation.
Categories:
Hidden categories: