The Cuevas de la Araña (known in English as the Araña Caves or the Spider Caves) are a group of caves in the municipality of Bicorp in Valencia, eastern Spain. The caves are in the valley of the river Escalona and were used by prehistoric people who left rock art. They are known for painted images of a bow and arrow goat hunt and for a scene depicting a human figure. 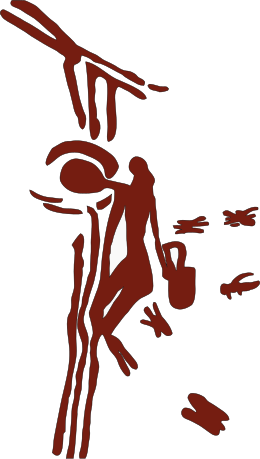 The "Man of Bicorp" holding onto lianas to gather honey from a beehive as depicted on an 8000-year-old cave painting near Valencia, Spain

The dating of such art is controversial, but the famous honey-gathering painting is believed to be epipaleolithic and is estimated to be around 8000 years old.[1]

The caves were discovered in the early twentieth century by a local teacher, Jaime Garí i Poch. They are included in the World Heritage Site Rock art of the Iberian Mediterranean Basin.

Retrieved from "http://en.turkcewiki.org/w/index.php?title=Cuevas_de_la_Araña&oldid=929497517"
This website is a mirror of Wikipedia, and is not affiliated with the Wikimedia Foundation.
Categories:
Hidden categories: