Jump to navigation Jump to search
Protected area in Chile 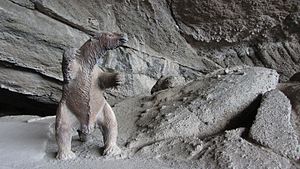 Replica of a Mylodon inside the cave 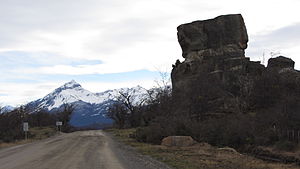 The "Devil's Chair" at the entrance of the monumental cave 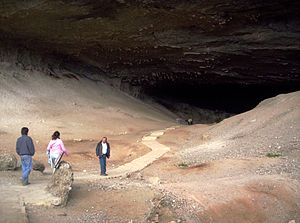 Interior of the largest cave

The monument is situated along the flanks of Cerro Benitez.[2] It comprises several caves and a rock formation called Silla del Diablo (Devil's Chair). The monument includes a cave which is notable for the discovery in 1895 of skin, bones and other parts of a giant ground sloth called Mylodon darwini. It is also part of the End of the World Route, a scenic touristic route.

The largest cave in the monument is the 200 metres (660 ft) long Milodón Cave. It was discovered in 1895 by Hermann Eberhard, German explorer of Patagonia. He found a large, seemingly fresh piece of skin of an unidentified animal. In 1896 the cave was explored by Otto Nordenskjöld and later it was recognized that the skin belonged to Mylodon – an extinct animal which died 10,200–13,560 years ago.

In the cave and other caves of the monument have been found remnants of other extinct animals and human remnants.

At the entrance of the monument is a life size replica of the prehistoric Mylodon, which was a very large herbivore, somewhat resembling a large bear. It became extinct at the end of the Pleistocene Epoch.

Investigations determined the survival of the Milodon until about 5,000 years ago and confirmed the existence of other animals, such as the "Dwarf Horse" Hippidion, the saber-toothed cat Smilodon and the litoptern Macrauchenia[3]

Panoramic view from outside the cave

Retrieved from "http://en.turkcewiki.org/w/index.php?title=Cueva_del_Milodón_Natural_Monument&oldid=931613231"
This website is a mirror of Wikipedia, and is not affiliated with the Wikimedia Foundation.
Categories:
Hidden categories: