Cremlingen is a municipality in the district of Wolfenbüttel, Lower Saxony, Germany. It borders Lehre, Königslutter, Sickte, and Braunschweig. Parts of it are adjacent to the Elm hills. 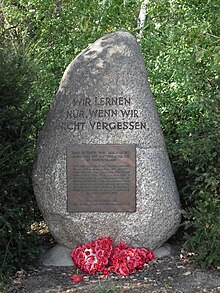 Stone monument at the site of the former concentration camp

Until its deestablishment in 1974, the municipalities later merged into Cremlingen were part of the district of Braunschweig.

The municipality has 2 train stations in the towns of Schandelah and Weddel at the railroad from Braunschweig to Magdeburg; Weddel is also served by trains towards Wolfsburg (Weddel loop).

The Federal Highway 1 crosses the municipality from east to west, and since the end of September 2006 Cremlingen has a connection point to the Federal Motorway (Bundesautobahn 39), which offers quick connections both to Wolfsburg and Braunschweig.

Cremlingen was established in 1974 by merging the former municipalities of 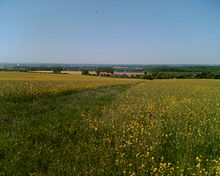 View from the Elm to the West

Retrieved from "http://en.turkcewiki.org/w/index.php?title=Cremlingen&oldid=932875659"
This website is a mirror of Wikipedia, and is not affiliated with the Wikimedia Foundation.
Categories:
Hidden categories: